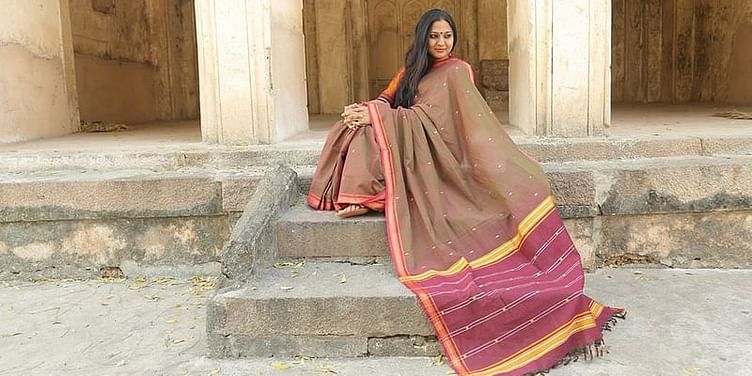 Mrinalini Shastry is the Founder of saree startup Six Yards Plus, which aims to make the garment a part of women's daily life while creating new markets for traditional weaves.

Mrinalini Shastry spent over 16 years working in the development sector, with NGOs, social enterprises and the Andhra Pradesh government, before she decided to start Six Yards Plus, a brand that sources authentic sarees across 20 states of India.

An alumna of Indian School of Business (ISB), Mrinalini spent most of her career working on women’s livelihoods, especially women’s self-help groups, helping them take their products online and making them profitable.

She zeroed in on sarees as she has been passionate about the six yards all her life.

“Since I turned 21, I have worn sarees to work. I really feel powerful in them and the kind I drape are everyday sarees, mostly handloom,” she says.

Starting off with just Rs 11,000, Mrinalini’s aim was to connect to different clusters of weavers across India, and not just look at a Benaras or a Kanjeevaram, which are popular anyway.

In 2017, she launched Six Yards Plus for urban women who want to drape a saree as often as they could but did not have much information on the kind of sarees that were suitable work wear. She says she was keen to create a space for artisanal sarees and work with clusters.

“It was also about changing perspectives. Women would rather wear Western clothes or a kurta to an interview. I knew we were getting into a small sliver of the changing market and trying to make sarees relevant in today’s world. Of course, there’s awareness about handlooms and less inhibition in wearing a saree to work, so that’s also helping,” Mrinalini says.

Due to her work in the development sector, Mrinalini had travelled extensively throughout Andhra Pradesh and Telangana, and this experience helped her connect with weaver clusters and gain a better understanding of different weaves. She has extended this to include clusters in West Bengal, Karnataka, Maharashtra, and Madhya Pradesh.

Six Yards Plus features Godavari, Ikkat, Gamcha, Shibori, Kalamkari, Kota, Maheshwari, Phulla, Ponduru, Jamdani, among many others. The sarees are available online on the company’s website, its flagship store in Hyderabad, and at Project Eve stores in Bengaluru and Hyderabad.

“There are some weaves like Benaras and Kanjeevaram that are already very popular so you don’t need to think of revival or do much about them. The others like Mangalgiri, Udipi, or gamcha sarees from Bihar feature as revival stories,” she says.

Mrinalini also believes “revival” is a fairly misunderstood term. “We are, for example, not revising a certain kind of weave, I would leave that to textile historians. I would say we are reviving market interest in these weaves by selling them to the right consumers who will appreciate the art,” she adds.

The entrepreneur has customised Maheshwari sarees for corporates like Dr Reddy’s for its senior leadership – that goes justbeyond product detailing to providing a service.

“Infosys also approached us for blouse pieces to give away, a different experience from the assembly line T-shirts corporates usually are known for,” she says.

The artisanal saree space has a number of players, and Mrinalini agrees it’s a competitive landscape.

“We have the Tatas, the Birlas, and a number of brands in the artisanal saree space, which is Rs 12,500 crore market. We do have a niche in this space as we work with different clusters and that’s why these 35 weaves are important to me. We have organised several exhibitions and also conduct workshops. All it needs is get to the right location and communicate in the right way to the target group,” she says.

Prices at Six Yards Plus start at Rs 950; most sarees are in the affordable range. It also has a curated signature range that has become quite popular.

Revenues have grown 6x since Six Yards Plus was launched in 2017 and the saree startup is all set to clock Rs 1 crore this year. Mrinalini works with a team of eight that includes employees in product, quality control, and sales, apart from the wide network of artisans.

The COVID-19 situation has affected the company, in terms of revenue and retail presence, but Mrinalini hopes the online space will help them pull through. In the coming years, she hopes to expand the brand’s presence pan-India, open more retail stores, and cater to more international customers.