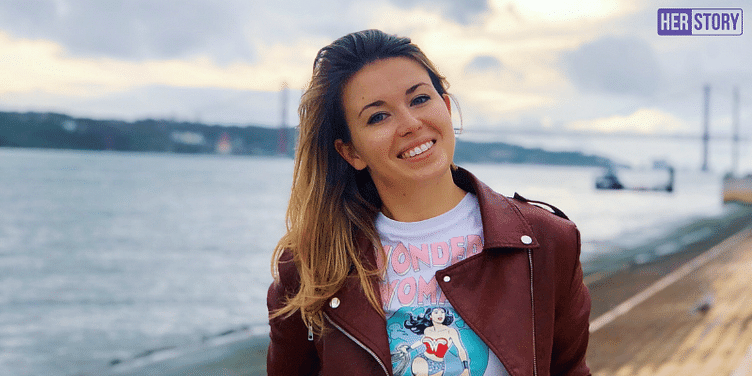 Based in San Francisco, Dasha Kroshkina is building edtech startup StudyFree, modelled after her own academic journey. Winner of Seedstars World and part of the 2020 cohort at Techstars, 30 percent of its clients are Indian students.

A typical student from a small Russian town, one of her Dasha Kroshkina’s dearest possessions while growing up was a large world map. She would look at it with awe and wonder whether her dream of travelling the world would become a reality someday.

Dasha was a smart student and always on the lookout for scholarships and grants to study abroad. These efforts paid off and now she has several degrees from international universities to her credit -

a bachelor’s in International Business from Zhejiang University in China and a master’s in finance from Shanghai Advanced Institute of Finance, Shanghai Jiao Tong University. She also studied economics as a visiting student in Spain and completed a course in Machine Learning from Stanford University in the US, all for free.

Dasha’s story drew a universal response every time it was shared. “Oh My God! I never knew such a thing was possible.”

Speaking to HerStory, Dasha says, “I understood there were millions and billions of students who were smart but still think it is impossible to study abroad to  due to lack of resources, information, and a support system.”

In September 2018, she founded StudyFree to ensure quality in terms of equal access to international opportunities for people with talent, irrespective of their background.

After a student selects the level of education they are looking to pursue, they are required to share information regarding academic performance, co-curricular activities, voluntary and social work, among others.

StudyFree then calculates their likelihood of securing a scholarship and the time it would take for preparation. After making a payment, it guides them through admission, their stay at the foreign country, and internship and job opportunities after completing their studies.

Dasha says the D2C platform has maintained the fee from students as a revenue source. This is because many consulting companies tend to charge revenues from schools and universities, which fail in bringing the best value for students.

Instead, StudyFree has developed a value chain of admission process and designed a credit to commission-based marketplace for other services along the way. This includes integrating partners like language preparation organisations, exam prep institutes like IELTS, TOEFL, GMAT, and coordinating internships and careers.

Having helped around 32,000 students so far, nearly 30 percent of StudyFree’s current clients are students from India. Dasha claims 98.2 percent of students have received either full or partial scholarships.

With a few hundred dollars, Dasha started the San Francisco-based venture as a manual product. As it consulted with students, the startup initially worked with Google documents and spreadsheets - where they gathered information on scholarships and grants - before integrating IT solutions.

Dasha was often told the idea is not scalable and will attract funding because there is no market for it. To be precise, Dasha says she faced as many as 35 rejections in the last two years.

However, she was resolute in pursuing the idea, stemming from her personal experience. “I think it is also the core quality of an entrepreneur – to keep going, when you can transform negativity into a driving force.”

Now in the growth stage, StudyFree received $500 000 in equity investment as the winner of Seedstars World in April this year and raised $600,000 in a pre-seed round led by Dutch venture fund Acrobator VC in August. Dasha is also part of the 2020 cohort of Techstars NY this year.

Prior to this, the entrepreneur had been careful with expenses. “We have been very careful and focussed on being superefficient, fighting for every percentage in conversion for every dollar spent,” she says.

The startup is now looking to improve the quality of the product, processes, and working on international expansion to reach as many students as possible.

What has worked for them is ramping up digital marketing to reach specific audiences scattered across the world. It leveraged social media platforms to build a digital growth machine and enter a new market.

It also helped that most of the team members have experience studying abroad. The entrepreneur says, “We have a high level of empathy towards students and their problems because we have been there, understand their pain, trouble, and their dreams.”

While Dasha works out of the Silicon Valley, the startup’s 36 team members work remotely from Russia, UK, Poland, Germany, Nigeria, and Brazil, and other countries.

Dasha is all too aware of the challenges that come with entrepreneurship.

She says there were times when the tech person would leave in the middle of building a product and she didn’t know of a suitable candidate to take over due to lack of technical knowledge of the business.

When dealing with newer markets like India, she also faced difficulty with the payment system initially.

Notably, COVID-19 has accelerated people’s desires to study abroad. Although they were initially doubtful about their plans in March and April due to uncertainty, Dasha says planning and preparation for studying abroad begins a year or two early and many are logging in to study abroad in September 2021, 2022, and so on.