[TechSparks 2020] In tough times, not giving up is all it takes: Rajashree R, Chief Marketing Officer, TCS 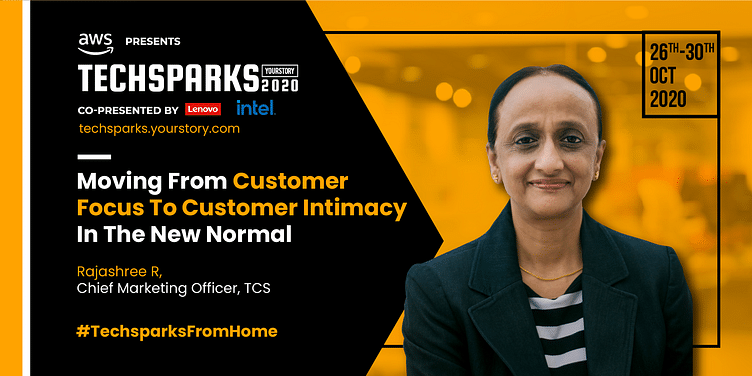 On the final day of TechSparks 2020, Rajashree R, Chief Marketing Officer of Tata Consultancy Services, discussed the power of storytelling, pivoting to digital platforms amidst the pandemic, and why showing up during tough times is akin to not giving up.

Rajashree R, Chief Marketing Officer of Tata Consultancy Services (TCS), has one aim: to make the company the world’s number one brand in IT services.

After two decades of working in the retail and CPG industry, including 15 years of leading the retail solutions group for TCS, she took over as chief marketing officer (CMO) in February 2020.

In a fireside chat with ﻿YourStory Media﻿ Founder and CEO Shradha Sharma during the 11th edition of TechSparks, India’s largest tech-entrepreneurship event, the veteran leader delved into communication being key during the pandemic, keeping team members motivated, and the importance of taking risks.

A firm believer in the power of storytelling, she said TCS’ journey as the first company that took India to the world needed to be told vigorously and effectively.

“We hear about brands coming from different parts of the world and I think TCS can be that for India. We have a great story to tell and are ambitious about the brand. The story of TCS is not about one project here and there, but about transforming organisations, countries, and industries,” Rajashree said.

In September 2020, TCS won the Gartner Communications Award for Excellence in Building a Corporate Brand and was also selected as a US Superbrand.

[TechSparks2020] Ritu Anand speaks on empathy, humility, passion, gratitude as fabrics of diversity of the mind

Leading amidst the pandemic

The COVID-19 outbreak in India meant completely transforming the way TCS engaged with its customers, involving more than 2,000 leading businesses around the world, 450,000 employees, and nine lakh shareholders.

Large events on their massive platform were pivoted to digital platforms within a few weeks, keeping timelines in mind. Rajashree said despite the availability of tools, platforms, and technology, it took a mindset shift to adapt to the new normal rapidly.

She said this had been a great opportunity for marketers around the world, especially those in the B2B market, to focus on communication.  This is because “communication became the key to how we presented ourselves to the world”.

The critical aspect was how to maintain intimacy with all stakeholders, to bring the ‘human’ to the forefront of all tech-empowered engagements, she said.

To address this, TCS increased its focus on marketing even as most organisations were reducing their marketing budgets.

“We increased our communication channels, from hosting more events and activities online to launching a television campaign called Part of the Story. Our connections with the customers increased by four to five times,” she explained.

Belongingness in times of social distancing

The OneTCS programme was launched to stay connected with over 450,000 associates across 50-odd countries, and included talks with different personalities such as an astronaut, musician, and COVID-19 survivor.

The company’s most recent activity was the OneTCS talent hunt, sort of like India’s Got Talent, which saw thousands of participants.

These initiatives are Rajashree’s way of restoring some semblance of what she calls “ambient awareness”.

“Our offices, with nearly 40,000 people, are almost like a university campus. A lot happens – you hear about projects, meet people, and find your life partner here. But in a couple of weeks, all these 450,000 people were sitting isolated at home,” she said.

It was challenging but important because they also act as brand ambassadors. “Our customers get to know of TCS through these associates and it is very important for us to stay connected with them and give them a sense of pride and belonging,” she added.

Speaking on how startups can market their products, Rajashree said the secret lies in simplicity. She gave the example of Google where a simple bar has the tech complexities of the search engine behind it.

“A lot of tech entrepreneurs get so involved in algorithms and science…it is all very important, but we need to focus on what you present to the world.”

She said most people talk about how complex the solution is while the entire messaging should be around simplicity.

The leader has seen many startups as part of TCS COIN, a programme that fosters collaborative innovation between startups, researchers, academics, and the corporate world.

Rajashree believes that in the world of Apple, it is the time of style before substance. Although the idea has been frequently contested, she maintains that look and feel, design, storytelling, and messaging are very important.

To never give up

Women in managerial and leadership positions are not commonplace yet in India. Ascending the professional ladder meant not giving up, Rajashree said, adding, “When you go through tough times and feel like throwing it all away – and money is not the main reason – not giving up is all it takes because once we are there, we are as good as anybody else and even better than most of the people out there.”

“When I say don't give up, it is not just about quitting jobs. Often women don’t sign up for tougher roles because their child is in Class 10, or don’t opt for sales because it involves travelling. We start giving up in layers and are finally left with very little,” she shared.

Most of the time, merely showing up for work is victory. “I may sound a little arrogant but sometimes I tell myself even 50 percent of me is good enough to be as good as I can be. But, it is about not giving up,” she emphasised.

Being open to risks and new learnings has also kept her in good stead. Despite never having coded, she has built the product team of TCS retail involving implementation of AI and microservices and holds patents in computer visions.

“I embrace change across my journey. We should not be restricted by ‘I can or can't’. Sometimes, we have to be like a small child who doesn't care and just jump into it,” she advised.

Rajashree also urged entrepreneurs and youngsters to take things one day at a time by focusing on the tasks at hand with the right balance of short and long-term goals.