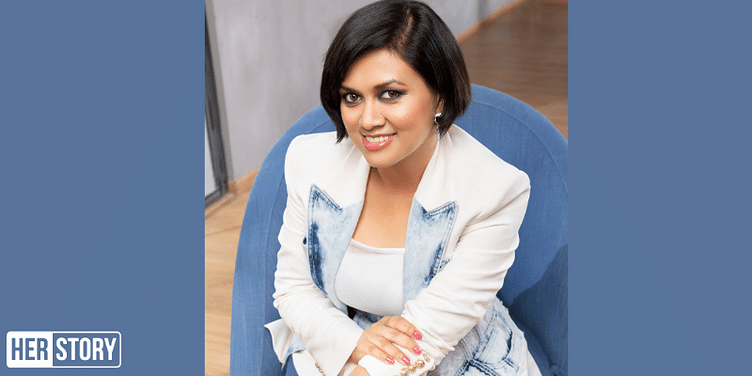 It took Devita Saraf eight years to go from 0 to Rs 65 crore and then another four years to go from Rs 65 Cr to Rs 1,000 Cr. The Chairman and CEO of The Vu Group and the richest self-made woman under 40 tells HerStory on how they are focusing on the new age consumer.

Devita Saraf, Chairman and CEO of The Vu Group, a new age technology conglomerate, is the only woman to make it to the recently announced Hurun India 2020 Rich List of self-made Indian entrepreneurs.

She rubs shoulders with the best, and ranks 16th among the most promising, entrepreneurial, business talent in the country. From a bootstrapped company to a tech conglomerate – the journey has not been one without challenges, and Devita hopes that she will inspire young women to become entrepreneurs and leaders.

Apart from being listed on the IIFL Wealth and Hurun India list, over the years, Devita has also been recognised in Fortune India’s Top 50 Most Powerful Women in India (2019), GQ’s 50 Most Influential Indians (2019), and India Today’s 8 Most Powerful Changemakers In The Business World (2018).

In a conversation with HerStory, Devita tells us what the award means to her, new ventures as an entrepreneur, being a “model” CEO, and mentoring other women.

HerStory (HS): Tell us how it feels about being the richest self-made woman under 40? What does this title mean to you?

Devita Saraf (DS): It’s exciting to be recognised as the richest self-made woman in India. Ever since the list came out, the congratulatory messages from across India and the world haven’t stopped. However, I do feel a sense of responsibility because there are so many amazing Indian women entrepreneurs who, if given a chance, would give everybody on the list a tough fight. Additionally, the most important part of being on the list is also that we are probably the only company on that list which is not only women-run but also profitable.

HS: We last spoke to you in 2017. What have been the significant changes in your life and business post-that?

DS: When we last spoke, the business was probably one-fourth the size it is today. Now, it’s a Rs 1,000 crore conglomerate, made into the Vu Group, which includes the lifestyle and workstyle division, and we have established a significant leadership position in the category that we are in. At present, we’re the only premium brand in televisions apart from Sony and Samsung. This is especially remarkable given the competition we have seen coming in from China, etc., who we have given a good run for their money in the Indian market. This shows the strength of Indian entrepreneurship. On the personal side of course the fact that I own 100 percent of this business gives me a lot of power and freedom to steer it the way that I want. Additionally, I’ve also bought a house for myself, which I think is a big deal because again, for me, it’s always been about breaking stereotypes, about changing the game and if you really work hard and you compete with yourself then no one can compete with you.

HS: Tell us about your new ventures…

DS: Our lifestyles have changed drastically in the last year or so and we need solutions that are a lot more flexible, sustainable, and futuristic in order to enhance our day-to-day experiences. With that in mind, all the products that we make, whether it’s for productivity or entertainment, have to be able to support a very new-age and millennial way of living. Therefore our TVs become not only smarter but are focused on bringing a lot of value to your life other than just pure entertainment. For example, I do my workouts in front of a TV now, because I don’t know the next time I will be entering a gym, if ever.

Secondly, as an entrepreneur, you’re connected and talking to people across the country and the world. Here, Meeting by Vu is a fabulous way of conducting your meetings without feeling Zoom fatigued. The fact that our lab is always focused on a new-age consumer means we are always future-ready and have a great slew of products in our pipeline always.

HS: From a bootstrapped company to now various ventures… How has your business conglomerate grown?

DS: It’s grown leaps and bounds from the time we started, back in 2006, and the best part is that this growth has come without having to dilute any equity. The core team has pretty much stayed the same and together we’ve grown and run this business while staying true to what this brand was when I first wrote the business plan back in 2005 as someone straight out of college.

This steady progress and cohesiveness are what makes us such a solid company. Since I did have the backing of being a second-generation tech entrepreneur I wouldn’t necessarily categorise us as a bootstrapped company. However, we are frugal about the way we spend, which has helped us immensely in building a brand and a very strong asset base for the business. This has helped us in times like the lockdown where we probably were the only company in the entire country who paid an advance salary to our employees and did not fire at all. We were the only ones who gave customer service during the lockdown because of the company's such strong and lean operations.

HS: Tell us about mentoring other women to become leaders.

DS: There are two approaches here - one is where you have a direct outreach to people and the other is through leading by example. With regard to the former, I have done over 150 talks in India and abroad. Talking to women from different walks of life, from those who are early entrepreneurs to those who want to become an entrepreneur to those who are seasoned, encouraging and supporting them as well as sharing candidly about my journey. The latter approach is an indirect one where through the media I make sure that I’m able to create a positive role model for young women because I find that there is a very dichotomous approach when it comes to slotting women.

HS: Do you think it’s difficult to be a woman entrepreneur in India?

DS: It is surely not easy in India, because I think women’s careers aren’t taken as seriously, unfortunately. Their education is, but then as soon as there’s a setback in the family or after marriage, the woman’s career somehow always has to take the backseat. I don’t think most women have got the freedom, the way I’ve had, to focus on their career entirely. Having said that I also find that geographically things are different, in different parts of India. Being from Mumbai, I’ve never had the challenge of facing a constant bias of a patriarchal mindset, which I do find when I travel through the length and breadth of the country. But hopefully with so much penetration of the internet and even news outlets like YourStory and HerStory that highlight role models for young women and their families, people will find the right role models to follow and this will change the status quo.

HS: Looking back at your journey, what has been your biggest highs and lowest lows?

DS: When you’re an entrepreneur or leader, you are used to highs and lows and don’t take any of them very personally. Even coming on a valuation list, I’m still very cautious in the way I spend and try not to waste money. So, it’s pretty much even keel for me in terms of looking at a business. If you have a low, whether it’s a product that’s not selling, a distribution that’s falling apart, your cash flow drying up or you have a team member leave, you have to find a way to deal with it.

The highs, of course, come when you reach great milestones, like reaching Rs 1,000 crore or being on the Hurun list or even the fact that we’ve just constantly beaten the competition stylishly, with every launch. It's all a part of the game and the journey wouldn't be as much fun if it was just a flat road.

HS: As India’s “Model CEO”, what is your singular approach as a CEO that makes you stand apart?

DS: In this current generation, when millennials look at brands, they want authenticity above everything else, and as a leader, I'm a front-facing leader. I’m putting myself out there to say - hey, here’s my product, you can trust me, contact me, DM me, I want you to understand how much effort has gone into the quality and experience of it and everything I say, I stand by.

So being a model CEO for me is one - about women embracing their femininity and not having to become hardened, masculine power women and two - not hiding behind the false image of an actor or cricketer but allowing customers to see who you are and build their trust in you.

HS: What would your advice be to aspiring women entrepreneurs?

DS: It's a marathon, not a sprint. It has taken me 15 years to get to where I am today. So whatever you do, please don't think it's going to be an 18 months cycle before you become big. As you know, it took me eight years to go from 0 to Rs 65 crore and then another four years to go from Rs 65 crore to Rs 1,000 crore, when the curve kind of kicked off for us. But it's a long-run game and unless you are serious and unless you think big, the big game is always going to be held by the boys. So my advice to women is to take your time, take it seriously and think big.

HS: Has the pandemic affected your business?

DS: It's been one of the busiest times, we’ve done four product launches since the lockdown and because people are addicted to watching their TVs sales are through the roof.

DS: My vision is to make the Vu Group into a company that's focused on new age, whether it's tech or other products, I haven't decided yet. It's always about not only being with the times but being ahead of the times and adjusting constantly to a newer, younger, and evolved customer. And of course, most importantly being profitable and above all being happy with your success.