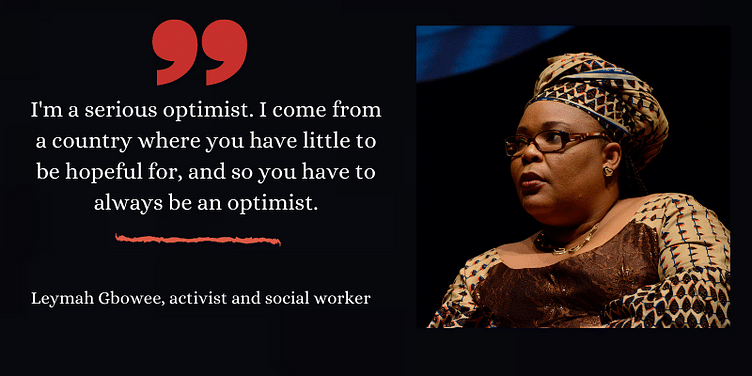 These quotes by Leymah Gbowee, who led a peaceful women’s movement during the civil war in Liberia that ended in 2003, will inspire you.

Many women have emerged as peacebuilding heroes from the civil wars in Liberia. Activist and social worker Leymah Gbowee is one of them who led a non-violent movement by uniting the Muslim and Christian women to challenge a 14-year-old civil war in 2003.

A founding member and Liberia Coordinator of the Women in Peacebuilding Network (WIPNET) of the West Africa Network for Peacebuilding (WANEP), Leymah received the Nobel Peace Prize in 2011.

A fierce women's advocate, she continues to fight for women’s rights and empowerment and has chronicled her journey in the memoir titled Mighty Be Our Powers: How Sisterhood, Prayer, and Sex Changed a Nation at War.

Here are 12 quotes by the trailblazing woman on leadership and women empowerment from her book, and media interaction and tweets over the years.

"Leadership is standing with your people. People say you have to live to fight another day, but sometimes you have to show you are a true leader."

“You can tell people of the need to struggle, but when the powerless start to see that they really can make a difference, nothing can quench the fire.”

"The one thing I have never been afraid of is standing before important people and speaking my mind. I represent women who may never have the opportunity to go to the UN or meet with a president. I'm never afraid to speak truth to power."

"There is something in this world that every individual can do. God has created all of us with something unique to contribute."

“You can never leave footprints that last if you are always walking on tiptoe.”

"Because of women like us, I believe that in the end, tyranny will never succeed, and goodness will always vanquish evil. Although I may not see it in my lifetime, peace will overcome."

"I think the world that we are living in, as unfair as it may be, is that the media will only capture things that are either violent or sexually motivated. Nothing about peace really sells to the media, like war, killings, sex, rape and abuse."

“It is our duty to stand up for humanity. Step in and correct things that are wrong.”

"I'm a serious optimist. I come from a country where you have little to be hopeful for, and so you have to always be an optimist."

"The beauty is in the number of young women who have seen a future beyond what they had."

"Education is so much more than what happens in the classroom, it's also instilling ethics, leadership, peace skills in the next generation."