Bankrupt at 24, she sold balloons on the beach, but Deepa Aathreya always believed ‘apna time aayega’ 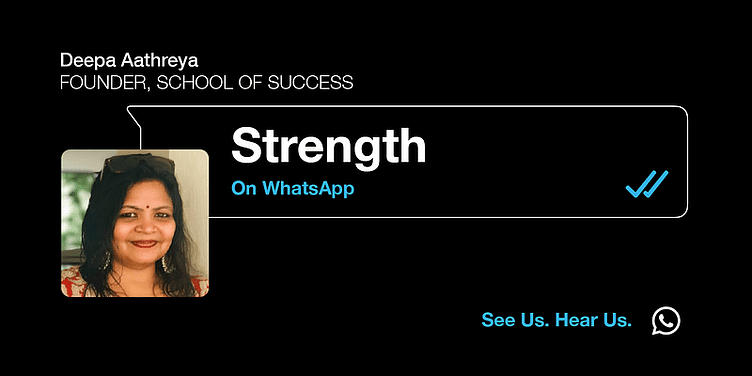 Fighting against odds, Deepa Aathreya founded the “School of Success” , aimed at the all-round development of parents, students and teachers.

Chennai-based entrepreneur Deepa Aathreya’s story is one of survival against all odds.

Her struggles began right from childhood. While at school, she was mocked for her weight and called ‘baby elephant’. However, the turning point came in Class VIII, when her teacher motivated her and life transformed for the better.

“Her encouragement and winning a school election made me more responsible and I got out of my shell,” she says.

After completing her MBA, she was an intern with the RPG Retail Group when she got married to her husband, Aravind against the wishes of both families. After her son was born, she quit the internship. Helpless while at home, and feeling guilty at not contributing to the household income, she decided to help her former boss throw a birthday party for her son.

“The theme ‘Go Green’ was innovative 17 years ago, with saplings given away as return gifts. Impressed by my event-planning skills, my clientele increased and I began to conduct summer camps for children, and also developed a ‘Leadership for Kids’ course,” she recalls.

However, fate had other plans. She was cheated by her business partner and in a couple of years, the business crashed. Deepa’s life at that time mirrored a story from the movies – at 24, she had lost her home and her car, and had to pull her son out of school and everyday became a challenge.

“I started telling stories to children for free at the Besant Nagar beach, and would sell balloons after the session. They became a hit and soon I had a huge fan club of children who would come to the beach to listen to ‘Deepa aunty’s stories’,” she says.

The media took notice of her efforts, and schools began inviting her for storytelling sessions. Buoyed by the response, she launched the ﻿School of Success﻿ that caters to over 2,500 schools with different programmes for teachers, parents, and students.

She has also initiated a movement called ‘Be The Change’, a social movement where children drive real life social causes.

Now, School of Success has touched more than three lakh students across the country. She does not charge specific fees for her courses but leaves it up to schools to pay whatever they can within their budget. As part of Be The Change Movement, children have adopted farmers; donated over 10,000 books, and planted over a thousand trees.

“After my accident, I stopped chasing money. I focused on my purpose. Money has been flowing automatically since then,” she adds.

Deepa’s days are full running the School of Success and also contributing to social causes. And in between all these, she says WhatsApp is her go-to medium to keep in touch with all stakeholders.

“WhatsApp is a brilliant marketing tool for me to showcase my business. Status updates and broadcast lists help me stay connected with my stakeholders and announcements of products and services has never been so easy. I am the Chairperson of the TN women edupreneurs group. We are connected on WhatsApp and keep sharing the latest trends in education and also keep supporting each other in whatever way we can. Similarly, we have a group called Be The Change, where parents and my students are connected. This is a social movement and children are showcasing several social causes brilliantly,” she says.

Deepa has plans to launch “The Alt School” – a holistic open school/home school for children.

Life may have thrown curveballs at Deepa, but her belief in apna time aayega has literally seen her go places.