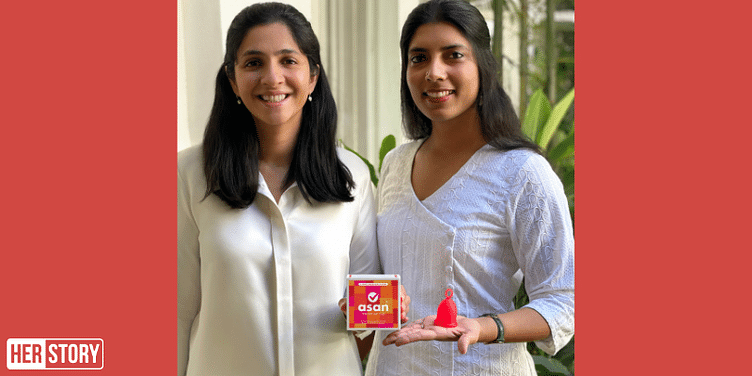 Ira Guha launched the Asan menstrual cup, designed with engineers at the Harvard-Kennedy lab. For every cup Asan sells, it donates one for free to a woman or girl who suffers from period poverty.

In 2017, when Ira Guha was doing her Master’s in Public Policy at the Harvard-Kennedy School, she visited her parents in Bengaluru for Christmas.

One of her mother’s part-time cooks, Mary, had taken time off from work because she was unwell. On her return she told Ira that she had missed work because of her periods. On further prodding, she revealed that the Rs 2 sanitary pad she used was not only uncomfortable to wear, but gave her rashes and also a urinary tract infection (UTI). Each cycle was a painful affair.

“I had been using the menstrual cup ever since I was a student of Politics at the University of Cambridge and working in the UK. I had an extra one and gave it to Mary to try. She found it easy and comfortable to use and asked one for her sister as well. Later, we distributed a few to the domestic workers at our place in Coonoor,” says Ira.

Soon, Ira was spending over $300 on menstrual cups before every trip to India. As a student of public policy who was looking to work towards social impact, designing, and launching a menstrual cup seemed to be the right idea at the time.

The first challenge was to sort out the flaws in design. "Though we were distributing high-quality cups from the US, the women reported leaks and difficulty in removal. So, we set forth to design ‘the world’s best menstrual cup for women’ with a proprietary design – a removal ring,” explains Ira.

This saw the launch of the Asan menstrual cup in January this year. Ira partnered with Anuradha Mahadevan, a former consultant and engineer with deep local market expertise, for its launch in India.

Designed with engineers at the Harvard Innovation Lab, the Asan menstrual cup took two years of product development and four rounds of user testing to perfect the unique design, which is protected by registered design rights in the US, the UK, Europe, and India.

The cup is made from medical grade silicone and features a unique removal ring, which makes it extremely easy to use compared with other menstrual cups.

It can be reused for up to 10 years. This helps in averting landfill waste – there is 12.3 billion sanitary pads per year in India alone.

Keeping in mind that menstrual cups do not reach the women who need it the most, especially those in rural areas, and who also cannot afford it, Ira and Anuradha launched a ‘buy one, donate one’ campaign.

“Half the women in the developing world do not have access to any kind of period product. We partnered with women’s health NGO’s working in the villages in Kanakapura (outskirts of Bengaluru) for a donation pilot by first inducting 10 health workers into the campaign,” Ira says.

Taking it to rural women

She believes that unless women used the product, they wouldn’t be able to convert others to it. The health workers said that it ‘revolutionised’ their lives and went on to pass the message to their village and news spread to other villages as well. Soon, women were asking for the ‘magical’ cup.

The aim is to now donate around 500 cups following the first month of sales in Kanakapura and in the villages of Gujarat through the NGO, SEWA.

“Half my job is breaking the myths and barriers that women in cities have about rural women,” says Ira. She explains that apart from the taboo and stigma associated with periods, pads cost money, gives rashes, and with no proper waste management in place, women have to burn their pads at midnight.

Asan takes the help of health workers to introduce women to the product with the help of local language video and content.

The Asan cup is priced at Rs 1,800 as it works on a ‘buy one, donate one’ model, and it is sold through the Asan website. The founders are popularising the product through relevant content on their social media platforms.

“Our mission is much broader than just selling a menstrual cup. It’s also about conveying the right kind of information – teaching women not only how to use the cup but also about anatomy. Our user guide has been designed by gynecologists,” says Ira.

Ira was awarded the Warner Fellowship by Harvard’s Women and Public Policy Programme as well as First Place at the King’s College Entrepreneurship Competition, University of Cambridge (£20,000 prize). These grants were used for initial research and development. The founders plan on raising a seed round soon.

“We are in talks with a number of corporates to be part of their CSR plans and sponsor cups in villages. We are looking at different ways to scale,” says Ira.

(The author tried the Asan menstrual cup. What differentiated it from the other three she used earlier were – high quality grade silicon, no leaks, and most important of all, the ring that makes the cup easy to remove. When you use one, you are also enabling a woman in a rural area to use a period product.)