For women VCs and investors, India’s startup fundraising scenario is a work in progress 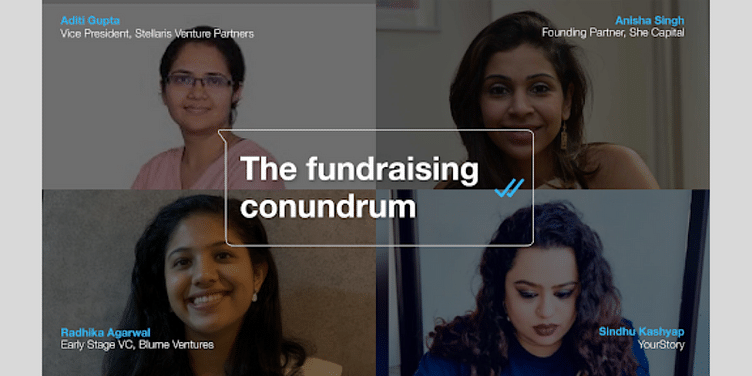 In an insightful roundtable discussion as a part of WhatsApp’s ‘See Us. Hear Us’ campaign, YourStory spoke to three women leaders from the Indian startup ecosystem to shed light on the challenges women founders face while raising funds and why they need to stick together

Clad in a yellow suit and her son glued to her waist, Bumble founder and CEO Whitney Wolfe Herd made history on February 11, 2021 by becoming the youngest woman ever to take a company public on the NASDAQ floor. She had the attention of millions of awe-inspired women entrepreneurs and startup founders across the world who were weaving a similar success story.

Whitney might have set the tone for the future, but back in India the startup ecosystem seems to be skewed in favour of men, especially when it comes to fundraising. According to a MAKERS India report, while there has been a substantial increase in the number of women entrepreneurs in tech since 2010 (11X), the total funding raised by women-led tech startups remains minuscule — just 1.43 percent between January 2018 and June 2020. From unconscious biases to lack of ecosystem support and a supportive peer group, there are various factors that usually lead to such a skewed scenario.

To throw more light on why such a gender imbalance exists in startup funding, YourStory and WhatsApp hosted a roundtable discussion on the topic ‘The fundraising conundrum’ where three successful women entrepreneurs and venture capitalists shared their insights about the industry. The discussion was a part of WhatsApp’s ‘See Us. Hear Us’ campaign.

Here are a few takeaways from the riveting discussion:

The panellists said that they saw fewer women presenting fundraising pitches than men, but the reasons contributing to the observation were more structural in nature and could be traced back to the kind of education and networking women get access to. The numbers were also lower because fewer women started new companies in comparison to men.

“Right from women having limited access to education and entrepreneurial circles to poorer access to funding, the reasons are structural. Also, between starting a startup and pitching to a venture capitalist, there is a lot of learning an entrepreneur undergoes, like when to pitch to a VC and what should be said. Unless you have a good network, it is very hard to get that knowledge,” said Blume Ventures’ Radhika Agarwal

Agreeing with Radhika, Aditi from Stellaris Venture Partners said that starting a new company is a difficult journey for any founder, be it a male or female. “But, you need to have the right kind of support and ambition from Day 1, and that support ecosystem seems to be missing for many women.”

She Capital’s Anisha Singh added that while there were phenomenal women-founded companies in India, they are yet to get the recognition they deserve. “But, one must understand that women entrepreneurs started out later than men. The chasm is closing in now as we have more role models, more women VCs and more accelerators focused on nurturing women-led startups. The year started with Bumble and we are seeing this happening globally. So, I think India is the next big bet.”

Need for more women investors on board

Explaining how having more women investors could benefit the ecosystem at large via a ‘trickle down’ effect, the leaders said that they are seeing more women turning investors and that it's a work in progress. The more unicorns we have, the more women VCs we'll see, they concurred.

Sharing her views, Radhika said, “Women are half the consumer economy. In several parts of India, women make household purchase decisions, be it a child’s education or healthcare. I think it’s important to have that mind space sitting on the table, as women investors will be helpful in explaining why females will look at financial products differently than men.”

Anisha pointed out that unconscious biases sometimes do affect VCs’ decisions and the status quo is not going to change until we change the way women are brought up in India. Citing the example of how women were more conservative while talking about numbers and generally let a male CFO do the job, she said, “Women should know their numbers and the scale of their vision, if they want to make VCs believe in their idea.”

“I haven't seen any visible difference between the approaches, but there is a general difference in the way women and men behave. The most common example is the way we write our emails. The number of times we use the phrase ‘I think’ and the way we proceed with caveat are very common gender problems,” said Aditi.

The panellists said that biases like male colleagues never letting a woman colleague pay a restaurant bill need to be eliminated. They also said that as these biases are not going to change any time soon, so women need to support each other.

The three leaders agreed that as networking goes online and startup founders do not have to travel for meetings, women are getting a level-playing field for once and they should seize the opportunity.

“The pandemic has been a blessing in disguise by changing behaviours. It can actually be an equaliser of forces. We all have been talking about concepts like promotion of the gig economy and flexible working hours for a while now, but the pandemic made it a reality. Women as a segment would be a core benefit group of such changes,” added Aditi.

The speakers delved into how WhatsApp serves as a useful platform for businesses and how several women leveraged it to grow their businesses during the COVID-19 pandemic. Explaining her stance on the topic, Aditi said the kind of penetration that WhatsApp has in India makes it a strong medium for startups to scale.

Talking about how Dunzo started out as a WhatsApp group, Radhika said that it was ridiculous to think that businesses that started on WhatsApp should not be backed by VCs. “As long as you're able to show scale, your costs are reducing and your product is gaining traction, there's no reason why VCs should say no or shy away from investing.”

For Anisha, it doesn't matter the platform a business is leveraging so long as numbers like the customer acquisition cost are in order. “If WhatsApp is giving you the opportunity to scale, especially in Tier 2 and 3 cities, that other platforms aren’t, then go for it.”

Have a thick skin and keep persisting

In the final segment of the discussion, the three panellists shared their advice that they thought could be useful for women entrepreneurs.

Aditi said that given how the odds aren't always in favour of women entrepreneurs, they should have a thick skin and reach out to people who can encourage them.

Radhika feels that women should learn from their counterparts in the startup ecosystem. “Try to learn from as many founders as you can, even if they aren’t from the same sector as yours.”

Meanwhile, Anisha felt that they should keep persisting, even when the times are not in their favour. “Not quitting is half the battle won. Entrepreneurship is a rough journey, but an addictive one,” she added before signing off.