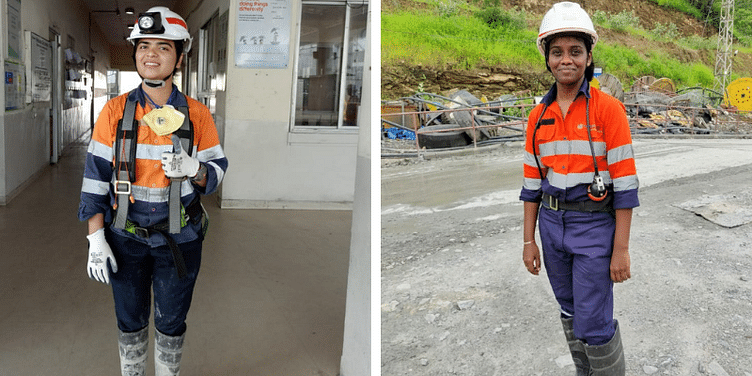 Sandhya Rasakatla and Yogeshwari Rane – the first Indian women to be appointed as managers in an underground mine at Hindustan Zinc, speak about breaking stereotypes and making it in a man’s world.

Last month, Sandhya Rasakatla made history when she was appointed the first-ever woman underground mine manager by Hindustan Zinc, one of the largest producers of Zinc-Lead and Silver. She took over the role as Mine Manager in the company’s Zawarmala Mine in Rajasthan.

Her colleague at Hindustan Zinc, Yogeshwari Rane, became the Head, Planning and Development at the Kayad Mine in Rajasthan – making it a double honour for women in unconventional and hitherto male-dominated roles.

While women in mining continue to be a rare breed, Sandhya’s and Yogeshwari’s achievements come on the back of landmark amendments made in 2019 to the Mines Act 1952, which made it eligible for women to work in any mine – both above and below ground – if they complete the required certifications.

In an interview with HerStory, Sandhya Rasakatla and Yogeshwari Rane spoke about their achievements, acing it in a male-dominated profession, and their plans for the future.

“It was a proud moment for me, and my first reaction was shock and surprise,” says Sandhya, as she starts the conversation with her path-breaking achievement.

It’s a moment of pride for the 23-year-old to receive this honour at a young age, one she credits to the complete support of her family. As a child, Sandhya grew up in a mine area as her father was a mining engineer at the Singareni Coal Mines in Telangana.

“After completing my XIIth grade, while I was interested in computer science engineering, my uncle suggested that mining engineering would be a good idea. But there were people who dissuaded me saying that mining was only for men. However, I took it up as a challenge and enrolled at the Kothagudem School of Mines,” she says.

In 2018, she joined Hindustan Zinc Limited through campus placement.

“At the time, there was no option to go underground, work as a foreman, or shift-in-charge. The amendments in 2019 changed all that, and soon I started visiting the underground mine to gain experience in production and utility,” she says.

Posted at the Zawarmala Mine in Rajasthan, Sandhya was excited to be underground, though this was not the first time for her. She had often visited the underground mine at Singareni with her father and also during her studies.

As an Underground Mine Manager, Sandhya’s role encompassed regular visits to the underground mine in shifts, interact with workers and employees, and learning new technologies on the job.

“The mines are completely mechanised with different entry methods – shaft, ramp, cage, etc. The production drilling equipment is also state-of-the-art, and every day is a new learning experience,” she adds.

While working in a mine can be physically and mentally tough, Sandhya’s biggest challenge has been convincing others that she’s up to the task. Breaking the stereotype has been difficult but not impossible.

She advises young girls to go in for unconventional roles and take every job as a challenge. She aspires to be the first woman CEO of a mining company and maybe also have a crack at the UPSC exams. Whatever she plans to do, the sky’s certainly not the limit.

As a young girl living in Goa, Yogeshwari Rani grew up around mines. She was intrigued and always interested to know how a huge crust was excavated to mine valuable minerals.

Once she completed her XIIth grade, as luck would have it, a degree in mining engineering was introduced at the Goa Engineering College in association with Vedanta.

“I had always wanted to pursue something unique, exciting, and challenging. Initially I thought of civil or mechanical engineering, but when mining was introduced, I became pretty sure I wanted to do this,” she says.

When she discussed the option with her parents, professors, and others, they dissuaded her that it was not a field for women.

“This made my decision even stronger, I wanted to break the stereotype. I decided to take the risk and by the end of the first year, I was hooked. I started visiting mines and also topped my batch,” she adds.

She was one of the three girls who were placed in Vedanta after completing the course.

When mining was banned in Goa, she was transferred to Hindustan Zinc and for the first time, left Goa to work in an underground mine.

She moved to the Rampur Agucha Mines in Rajasthan and currently works at the Kayadi Mines in the state.

“The amendments to the Mines Act made it possible for women to work in an underground mine till 7pm. I took a transfer from planning to operations and started working in the A Shift in operations beginning at 6 am. I am in charge of allocation of machine to manpower and providing workers with resources throughout the shift,” Yogeshwari says.

While you need to be strong both physically and mentally, Yogeshwari believes you eventually learn things and it’s all about the experience you gain every day.

The biggest challenge, she says, is to make people believe in her. “People usually don’t trust you with any “hard” jobs. But once you make them believe you can handle anything, then they give you more jobs,” she adds.

As for the pioneering achievement, Yogeshwari is on top of the world. “I have worked in this industry for the past five years and was waiting for the opportunity to work hard and get these certifications,” she says.

Her plans are manifold, but she likes to focus on just one at a time and when that doesn’t work, move onto Plan B and then Plan C. Right now, her focus is to work her way to the top management at Hindustan Zinc.

India gets its first-ever woman underground mine manager

Meet the women entrepreneurs acing the sportswear game with their startups