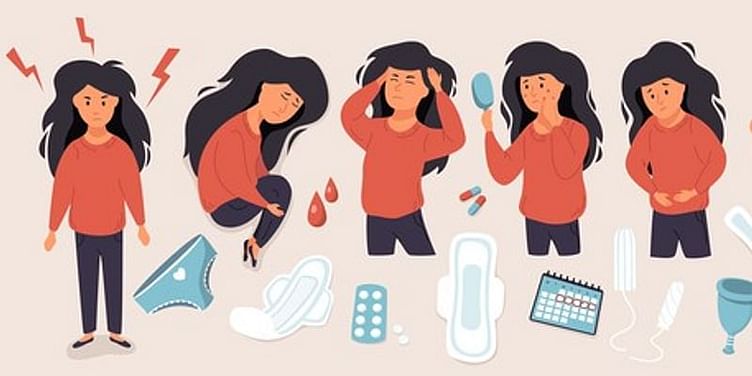 On World Menstrual Hygiene Day, we take a look at the latest PMS pain relief vegan product in the market, which has been launched by Gurugram-based superfoods and AI health The Healthy Company.

Headaches, mood swings, and bloating are some symptoms that most women face every month during menstruation. While symptoms vary, more than 90 percent of women face some premenstrual symptoms (PMS), according to The Office on Women’s Health.

“This means 90 percent of half our population is fighting a problem that does not have a viable solution yet in the Indian market,” says Rithu Rai, who is part of the business development and operations team at Gurugram-based The Healthy Company.

The gummies are purely vegan and scientifically developed in consultation with superfood producers and manufacturers. The three key ingredients are Dong quai, Vitamin B6, and lemon balm, and women can consume them three times a day regularly for seven days at least a week or two prior to their period.

However, making the gummies sugar-free by substituting with a healthy alternative involved a lot of work. The team later chose to use chasteberry as a sweetener.

"There are a lot of superfoods in the market and each attempts to mitigate some sort of problem or issue. But to combine them and come up with a product that is actually liked by people is quite difficult. And that was a major challenge: to make superfood that is healthy and tasty."

Available on Amazon, Nykaa, and its own website, Rithu says the team has launched just one flavour to test the market response. It has sold over 1,200 packets, priced at Rs 899, in two months.

Founded by engineering graduates Devansh Jain Nawal and Ackshay Jain in 2018, the platform leverages artificial intelligence technology to assist their customers round the clock through a virtual health coach app Eva.

“If you miss a period, you're pregnant” and 12 other period myths busted

For Rithu, the thrill is in being part of a team that is developing solutions for all-too-real problems because “we’ve seen women around us, myself included, suffering from PMS symptoms that are often hard to tolerate”.

She says 65 to 70 percent of the startup’s customers are women, and they offer health plans with women’s health and lifestyle diseases like PCOS, PCOD, and thyroid in mind.

The idea is to help women who feel more burdened with unhealthy weight gain in the post-pregnancy stage and after menopause.

“Society is structured in a way that weight gain in men is ignored but fingers are pointed when women put on weight. They begin doubting themselves in the process. We assure them that putting on weight doesn't matter; an unhealthy lifestyle needs to change,” Rithu explains.

The Healthy Company claims to allay insecurities of women dealing with body image issues,. “Whether one is fat or thin, it’s nobody's business to judge. We offer various plans to lead a healthy lifestyle,” she says.

Amidst the pandemic last year, the startup raised $350,000 in its first institutional round of investment from marquee investors from Venture Catalysts, Kushal Bhagia as part of First Cheque, entrepreneurs Ashutosh Valani and Priyank Shah, Amit Waiker, and Vaibhav Karnavat, and Udtara Ventures.

In the future, The Healthy Company hopes to introduce the product in different flavours and develop other gummies that can help deter cravings for unhealthy food and sweet tooth temptations.