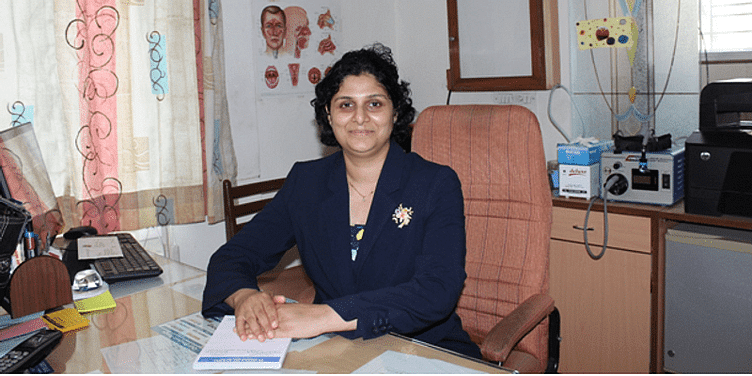 Dr Vinaya Chitale has done close to two decades of work in ENT surgery and Vertigo Balance therapy. Today, as a doctor practicing both in India and the US, Vinaya has been able to provide several patients the best of both worlds.

Chitale is a household name in Pune. While the name is synonymous with the dairy brand, it is also the name of one of the largest ENT and vertigo centres in the city. It is something Dr Vinaya Chitale has been building while juggling as a surgeon in the US.

As one of the top ENT surgeons in the country today, Dr Vinaya has been responsible for setting up rural care centres and telemedicine services, way before it became popular. This was followed by the setting up of the Vertigo and Balance Centre in 2014.

Vinaya says it was her father’s idea to be a practicing surgeon both in India and the US. She is an American Board Certified ENT surgeon, one among 10,000 around the world, with no other Indian on the list.

As an extension of the telemedicine work Vinaya began way back in 2010, she developed an app called ENT e-Seva during the COVID-19 lockdown in 2020 to help patients from rural areas with consultations, doctor and care training in ENT, and focus on first and second-line care. The app has a few 100 general practitioners and specialist care doctors on board.

“The idea is to give the right healthcare access to people who have no access,” she says. From evaluation to treatment, everything is done for just Rs 200. The doctors get Rs 100, and the other Rs 100 comes to the organisation.

“I provide Rs 50 to the ‘Asha workers’ who take care of the last-mile logistics, and Rs 50 to the specialists. The idea is to have one specialist support 100 general practitioners. The thought process is to extend to other cases like diabetes and cardio care,” says Vinaya.

Born in a family of doctors, medicine was a natural choice for her. Her father, Dr Vishvanath Bhaskar Chitale, was a famous ENT surgeon and founded the Chitale ENT Hospital in Pune.

“It was my father who kept saying - why don’t you practice in two countries? And I would wonder how… I told him nobody had done that before and how could I? He told me there isn't any rule, and nobody can stop you from practicing in both places. He kept all my licenses. But when the time came, my father was no more,” says Vinaya.

“My husband and I always had this vision that after we made enough money, we would come back to India and utilise our knowledge for the community. We knew that greed was something that would keep increasing, sometimes you need to say ‘no’ and be content. We knew once we could draw a certain figure salary, it meant our scope of knowledge had increased significantly. And that means it cannot be just about treating the patient who is sitting in front of you. It is about giving service to many more. And now, I have reached that point,” says Vinaya.

She adds it is our responsibility to give back to the society that has given us so much.

Vinaya’s grandfather, BG Chitale, founded the Chitale Dairy. “It is a rule in our family that 20 percent of our earnings go towards the community, 20 percent to temples, 20 percent for business growth, and another 20 percent for rural upliftment,” says Vinaya.

The best of both worlds

While in the US, she realised that surgical branches were extremely hard to get into.

“But I believed in creating my own destiny. I worked hard on my general surgery and on my research at Columbia, which got me an opportunity to work with the ENT team. I got the support system and I finally got an ENT seat,” says Vinaya.

A topper throughout her school and college years, becoming a top ENT surgeon was the next goal for Vinaya.

“My willingness to take on more, and never say no to any work paid off,” she says.

But by the time she passed out of college, her father passed away in 2010. And the next thing on her mind was managing the Chitale ENT Hospital.

While she was considering selling the hospital, Vinaya remembered her father’s words - of practicing both in India and the US. From 2010 until the next four to five years, Vinaya shuttled between India and the US. It was also the time Vinaya delivered a baby. She would shuttle between the two countries when her baby was just a few weeks old.

“I wanted to give the same standard of care to my patients in India, and the socio-economic status of the person walking through the door shouldn’t matter. For four years, I spent thousands of dollars just rebuilding the infrastructure and giving better access, because even in the US, I wanted to monitor what was going on in India,” adds Vinaya.

In 2010, telemedicine work was started. She would look at patient videos, make recommendations to her team of doctors on the steps needed to be taken, and would come to do the surgery.

Needless to say, the journey was tough. But as Vinaya says, it wasn’t impossible.

“I was setting up protocols. People have a different mindset and you are trying to create a little America here. Every patient walking through the door had to be handled like the way they would be in the US,” says Vinaya.

She set up vertigo and balance centre in India in 2014. While it costs nearly $2000 for the treatment in the US, Vinaya realised the prices had to be significantly lesser back home.

“When I started offering the treatment in India, patients would come to me and give me a lot of regard and gratitude. They didn’t know there was a treatment for vertigo that involved no medication. It was done through pure rehab and stimulating the natural compensation mechanism,” says Vinaya, who offered the treatment for free initially.

The joy of seeing people get back on their feet was a great satisfaction for her. It isn’t about symptomatic relief. Vinaya was offering people curative treatment and that dropped the chances of recurrence.

While in the US, Vinaya had a team of doctors to support her, but in India, she was alone, and so she started visiting centres to learn more about balance therapy and swallowing therapy.

“In my intense surgical programme, we weren’t taught therapy programme. But suddenly, giving complete care even to the non-surgical treatment was important. It became immensely satisfying.” With the balance centre in place, swallowing therapy has been the recent addition. The next treatment plan is to create vaccines for allergies,” says Vinaya, who did an immunotherapy programme for the same.

During the COVID-19 pandemic, Vinaya realised that movement is essential for people’s health, but COVID has restricted movement. Hence, her team came up with a few exercises to align the spine as balance is super important as it gives energy to the body. It will activate the inactive muscles. Vinaya is teaching these exercises via videos, which is now being used by a few corporates as well.

Today, Vinaya feels she gives better care in India than the US, as everything in the US is insurance run. In India, the patient is under her wings and she can focus on the best thing, as long as it is ethical. She explains,

“That is what it means to be a doctor. The burden of the patient is on your shoulders,” she says.