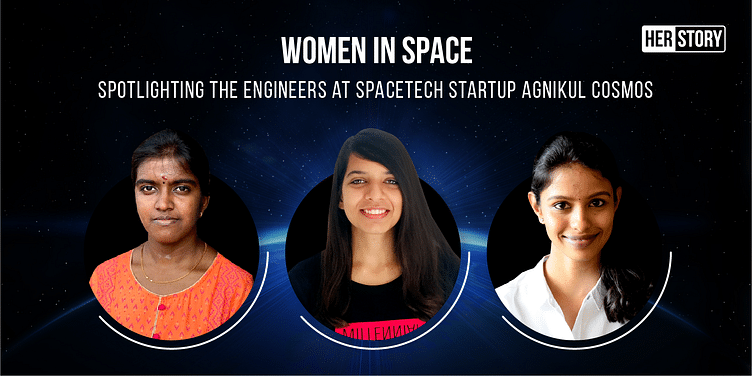 The year 2021 has already seen three big deals in the Indian spacetech startup ecosystem. Investor interest has been growing after the Indian government opened up the sector to include private players – and is likely to keep flourishing.

Startups such as IIT-Madras incubated aerospace startup Agnikul Cosmos are working to democratize access to space for the small satellite market, which is largely underserved globally.

Founded by Srinath Ravichandran and Moin SPM in 2017, Chennai-based Agnikul Cosmos focuses on providing a dedicated launch vehicle for smaller satellites at a lower cost. It was the first to sign a pact with Indian Space Research Organisation (ISRO) to tap into the space agency’s expertise and facilities to build its rocket.

Its core product, Agnibaan, is designed to carry up to 100 kg of payload to low-earth orbits of up to 700 km with a plug-and-play engine configuration.

The founders believe that space should be “accessible to everyone” and that this is just “the beginning of a long journey that will culminate in a world outside ours”.

Engineering is at the core of what Agnikul Cosmos does, and leading the teams are some young, formidable women who believe “the sky is the limit”.

Srinath, whose interest in physics was inspired by his mother and aunt, both teachers in the subject, says, “Women bring in a different viewpoint to problem-solving and management.”

HerStory spoke to Uma Maheshwari, Saraniya P, and Arushi Chaudhary from the Agnikul Cosmos team to know how the three women, who are leading ground testing and production teams, are confronting everyday challenges, learning on the job, and powering the journey to space.

Born and raised in Chennai, Uma completed her BTech in aeronautics from Madras Institute of Technology. During her course, she interned at various organisations, including Defence Research & Development Laboratory (DRDL), before joining Agnikul Cosmos.

“Agnilet is unique because it’s one piece of hardware, completely 3D printed, as a single component, in one run on the 3D printer,” she says.

Her success in the first firing is very inspiring - she led the project without fully knowing what the outcome would be.

Srinath explains: “It’s like building an ICU; a lot of different things have to come together. You have to deal with sensitive components like oxygen, kerosene that has to be managed in a very precise and meticulous manner so that testing will actually go through. Think of it like building a very critical part of a hospital. This custom engineering ensures efficiency at every stage.”

Uma led the project, which involved internal teams and external vendors, successfully through the COVID-19 pandemic.

“The biggest challenges were working with internal teams and managing a large part of the construction of the rig while performing and monitoring all testing terms – a humungous task in terms of commitment,” Uma says.

She says the will to never give up and “keep trying till it worked” kept her going. “Isn’t that the entire purpose of learning,” she asks.

Saraniya, who hails from Port Blair, moved to Chennai after completing her BTech in civil engineering from the Dr BR Ambedkar Institute of Technology, and trained in the MSME sector. She cleared her GATE exam and enrolled for a master’s degree in ocean technology at IIT-Madras.

The spacetech sector was a new field, but she relied on her engineering skills to start a job at Agnikul Cosmos as a systems engineer. This gave “me an overview of complete bases, and learn how to approach an engineering problem and look for solutions”.

Saraniya leads vehicle design at Agnikul – coordinating operations across an extremely diverse team base with conflicting needs – like the very nature of how rocket design works.

She manages hundreds of system designs, tracks and monitors their interfaces, and is very methodical in her effort in motivating the team to keep pushing the vehicle to be lighter and more efficient.

Srinath explains, “The conventional method would make the walls of the vessel very thick, which would make it unable to fly. We came up with other techniques to make it lighter. One way is to build a very thin-walled container and wrap it with composite fibres that makes it light enough to fly the rocket.”

Saraniya says she has been able to literally learn from scratch at Agnikul and “operate outside my comfort zone”.

She chose Agnikul over a larger company as it would let her follow her dream.

“My interest in space began in my childhood, inspired by Kalpana Chawla. However, the real passion towards space and spacetech grew in my college years. But, it felt like a dream, not achievable,” she says.

When Arushi started working at Agnikul, she realised that “given the right set of people, we can take up any project and even go multi-planetary”.

She leads all the avionics systems engineering work at Agnikul. This is a challenging task because Agnibaan's avionics architecture is unique. Freezing this involved a lot of background work with multiple complex trade-offs across a wide range of parameters within both, the avionics design crew and other teams.

“In simple terms, avionics architecture gives your vehicle the sense and the brain that senses different parameters – is there something wrong with your work or is everything going on perfectly,” Arushi explains.

The idea is to build a 21st century rocket with the latest technologies. “And it has to be made with off-the-shelf components, because we need to be cost efficient.”

“I would also want to go to Mars someday.”