How Satya Hinduja works with an array of sonic systems to create meaningful, transformative and transcendental music and experiences 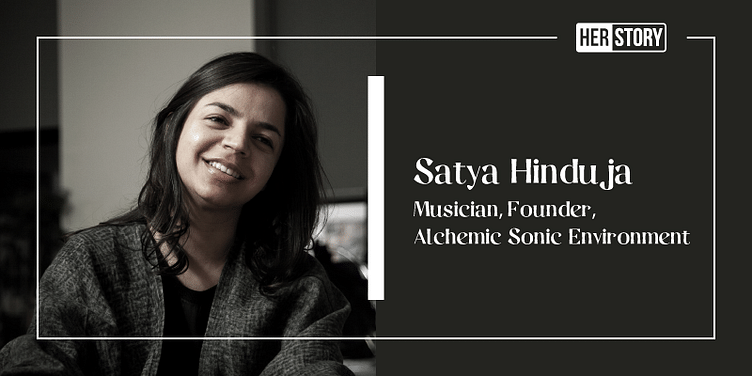 Born into a family that has a deep appreciation for music, Satya Hinduja’s initiation began at a very young age. It was the only thing, she says, she was attracted to. Cousins would often recall her naturally mimicking the melodies of jingles played on television by ear on her Casio PT-30 gifted to her by her parents. Soon she began studying Indian semi-classical vocal music.

Invited to sing on All India Radio (AIR) at the age of five, her natural musical talent guided her at every step. Often travelling to London and Switzerland to visit her uncles, she was quickly exposed to world and popular music. When MTV launched in India (she was 13), it broadened her musical vision even further.

The daughter of industrialist Ashok Hinduja says that while her initial schooling years provided very little in terms of musical training, she found a tutor, Sir Bismarck, who was her only teacher and guide who could channel her musical energies in the right way.

“Sir Bismarck taught me the guitar while Maureen, his daughter, offered me lessons in piano. My mother and I were in search of musical guidance for a long time. It was challenging to source someone who resonated with what I needed. Meeting Sir Bismarck radically shifted my life and musical experience. He introduced me to Berklee College of Music before I graduated from 10th grade, and I knew, intuitively then, I had to apply,” she recalls.

During her early childhood years, multiple personal and environmental traumas caused her inner music “to shut down”. But she persevered – as she knew her life was empty without studying music.

Exposed to trauma and music

Her first day at Berklee was 9/11. “I was suddenly exposed to world trauma and one of the biggest blows we as humanity have collectively experienced in our modern times. United Airlines Flight 175 had taken off from Boston Logan airport,” she says.

“It was chaos and mayhem. College was not being conducted the way it would have normally - the air of America had turned from excitement and a desire to learn and grow into a mixture of racism, confusion, fear, and grief.” Leaving the safety of home, moving to a country far away and at the onset of a new beginning being sucked into a trauma like 9/11 was heart-wrenching.

But as time went on, Satya continued her journey of learning and explored various musical instruments and genres at Berklee: classical guitar, Afro-Cuban percussion, World Music and Electronic Music.

She admits, ‘"It was an overwhelm of musical talent and culture to suddenly move from a “solo intimate experience with music” to a plethora of possibilities – music technology, jazz composition, classical music and music therapy to name just a few."

“As an independent thinker following my personal trajectory, when I walked into Berklee, I realised I was starting at the foundational level. There were students younger than me writing symphonic pieces while I was still learning to write one note. Music education in India is so different from the US. Americans are encouraged to learn and play a lot of music in their formative years,” she says.

Soon, she would dabble in song-writing, shift to film scoring, merge electronics with eclectic music and compose film soundtracks.

Satya returned to India and started working in the film industry with the music directors Salim-Sulaiman for six and a half years.

But as a musician and artist whose listening and curiosity was constantly evolving, she wanted to explore more. She was given the opportunity to collaborate with multi-media artist Ranbir Kaleka and compose for mixed-media installation “18 Allegories of the Self”. This was a beginning for her journey in the art world. She dabbled with DJing, marking her story as “a journey of energy and consciousness rather than just music for entertainment”.

During this process, she was invited by contemporary artist Raghava KK to speak at the InkTalks in 2013, before which she completed a Master’s in Electronic Music Production and DJing from Dubspot (NY).

“My talk focussed on how different frequencies of sound impact us at a deep subconscious level. I compared the sound of a siren versus the sound of the ocean on the large sound system at Ink. I started talking about how naturally when we live in metropolitan cities like Bombay, noise pollution impacts our brain at subconscious levels and we aren’t even aware because we are made to get used to the cacophony of noise versus the serenity we can experience when we are surrounded by natural environments,” she says.

At Ink, she met a neuroscientist from San Francisco, Rohan Dixit, who would change her life and music forever.

Satya explains, “Rohan’s talk was focused on his mental health journey as a US born-Indian neuroscientist trying to find his life path. He decided to travel to the Himalayas to test the brainwaves of meditating monks and discovered the link between brainwaves, frequencies, and meditation. He was sharing his new device Brain Bot – a brainwave headset that helps one meditate. I was so intrigued and asked him if we could work together.”

“It was then, he gifted me a two minute sound file of the 136.10 Hz sinewave, which he said was for the heart chakra, and ﻿Alchemic Sonic Environments﻿ was born,” she adds.

Satya used the frequency as a foundational drone to begin an improvisational electronic composition on her logic pro workstation just as Indian classical musicians improvise with the tanpura as a drone. The effect was life-changing.

“I lost time and space for three hours. I lost perception of the cognitive mind, the thinking mind, the monkey mind while I sat still staring out the window of my midtown Manhattan apartment. I was being taken into a profound meditative state for the first time in my life. It was quite exciting, scary, revelatory, and everything in between.”

Before this moment, a question that kept persisting during her research revealed the metaphysical Hindu concept of Nada Brahma (the primal sound of being). She then began incorporating the symbolism of ancient wisdom and yoga sutras within her minimalist and experimental music. She discovered the interconnectivity between Neuro-Linguistic Programming, Kinesiology, Quantum Theory, and Vedic philosophy.

“I decided to classify it as a different genre so that people could have access to it. If you start telling people it’s sound for healing; there may be objections or criticism because it’s not proven yet. So, I decided to name the compositions, Alchemic Electronica. I had begun blending ambient electronica with Buddhist chants, western instruments and tuning the entire piece to fit planetary frequencies so that people could engage with the intention and benefits of the underlying sound vibration,” she says.

The Alchemic Sonic Environment, an intimate and subtle sound journey informed by ancient wisdom and quantum theory, Satya elaborates, has a larger vision. Thanks to her uncle GP Hinduja, she has had the opportunity to introduce and perform her experiment and experience with the EMPRES Collective from Oxford University, The World Government Summit in Dubai, and has been travelling the world over to share it with a diverse group of people as she slowly builds the ASE ecosystem to help normalise and inform listeners world over about the transformational power of sound - it’s understanding and essence.

As COVID ravaged and erupted, ASE began focusing on the relationship of sound, music and mental health. “In May this year, Alchemic Sonic Environment partnered with the Chopra Foundation and Hinduja Foundation to curate, produce and host the three-hour segment of the “Never Alone Global Mental Health Summit: Spotlight India”, which has initiated a worldwide conversation and movement around building a new and sustainable culture for mental health.

Through ‘Spotlight India’, Hinduja Foundation wanted to offer audiences in India (and beyond) positive coping strategies to help them move from trauma and stigma to inspiration and action.

“We are working to build the ASE Method for early childhood development, focusing on deep listening and it’s impacts on our brain and body, and how merging ancient healing practices with emerging technologies can bring profound change and transformation,” she explains.