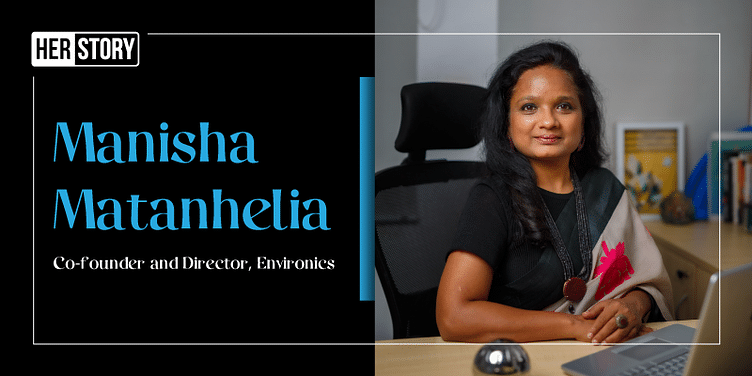 Based in Gurugram, Synergy Environics offers products and services to shield individuals and corporates from harmful man-made and natural radiations.

Architect-turned-entrepreneur Manisha Matanhelia’s firm belief is that the kind of environment one lives and works in has a huge impact on the overall health and well-being of an individual - and this set her on an entrepreneurial journey with Synergy Environics.

Manisha began the Synergy Environics journey in 2007 by teaming up with Ajay Poddar, a 1976 BTech graduate in civil engineering from IIT Delhi. The company now has a team of over 70 employees.

Why this woman entrepreneur wants Indians to work on happiness

Environics helps people tackle harmful radiations emitted from mobile gadgets and wireless connections through its invention - Envirochip, a chip that “operates at a higher frequency and generates random signals that superimpose the electromagnetic rays,” as per Massachusetts Institute of Technology (MIT’s) Technology Review.

The chip can be placed on devices like mobiles, laptops, wi-fi routers, smart TVs, desktops, and baby monitors.

Certified by Conformité Européenne (CE) and Max Healthcare India, it has also been tested by All India Institute of Medical Sciences (AIIMS), which stated that the device improves brain EEG. Its range of D2C products also include radiation protection gears EnviroCover, EnviroGlobe, and gadget disinfectant EnviroLife.

Besides these, it also offers architectural solutions to assess office and home spaces for electromagnetic radiation from the earth. However, to do this, the company works with homeowners and architects, but does not take up designing of buildings.

While this service is operated on both B2C and B2B associations, the products are sold on B2C basis through its own website and ecommerce platforms like Amazon and Flipkart as well as retail outlets like Croma and Mom&Me.

How these women entrepreneurs are simplifying cross border shipping for Indian SMBs, global sellers, and shoppers

Over a decade’s journey

Manisha recalls the long journey that led her to launch ﻿Environics﻿, a company now bent on being at the forefront of innovation in the radiation management space.

She says her father, a marwari businessman prioritising the education of his three daughters, played a huge role.

“In the town where I grew up (which is 60kms from Allahabad),  people would believe some houses are jinxed because they weren’t very comfortable or were not working for them for some reason. To my scientific mind, I felt that there must be something we can pinpoint to and can’t be treating it as a superstition,” she shares, recalling the first time ever she took interest in architecture.

Years later, when pursuing her bachelors studies in 1998, she learnt of “geopathic stress,” a phenomenon of distorted electromagnetic frequency in the earth that may interfere with a person’s productivity and overall well-being.

After years of studying different kinds of traditional architecture in places like Mahabalipuram in Tamil Nadu, and later learning that little work is done to look at Earth’s natural energy in modern India’s architecture, she took the plunge and started Synergy Environics in 2007.

The only challenge that has remained throughout the decade-long journey is raising awareness on harmful radiation, not just among the firm’s customers, but also potential employees.

COVID-19 helped to a certain extent as many started valuing well-being and immunity more than ever before. While the firm’s online B2C business picked up, with remote working becoming the norm, its B2B business scaled down.

Manisha says the team leveraged this time to focus on other initiatives and opportunities in the market and developed a NABL-approved gadget disinfectant. In the pipeline is also has a wearable product that can increase one’s energy, expected to be launched soon.

Manisha believes every individual and organisation is a potential client.

“We have now touched five million people, and our mission is to get the message across to 100 million in two years, which we hope to achieve by expanding our B2C forays and by reaching offices as they open up,” she adds.