Gender bias, organisational support, leaving the crown in the garage: Indra Nooyi’s take on her life and work 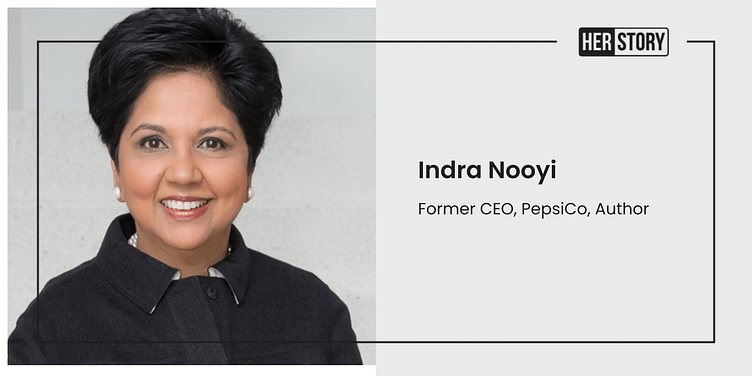 In her memoir, My Life in Full, PepsiCo’s longest serving CEO Indra Nooyi talks of her road to the top, her fulfilling journey, and the importance of family values.

Reams may have been written about Indra Nooyi's life and leadership style, but people haven’t had enough. Millions were looking forward to her autobiography, My Life in Full, a 320-page treatise on the life and times of a woman who - even if you may call it a cliché - made it big in a man's world. Heading ﻿PepsiCo﻿ was no mean feat, after all!

The memoir’s format is simple – and refreshing and inspiring in most parts.

Halfway through the book, when I tweeted about it, I got a reply from a friend: “Surprisingly, the word thatha is not trending.” It brought forth many chuckles, but it was one with many consequences in Nooyi's life – pleasant ones at that.

Thatha – the centre of the family

The book begins with familiar scenes from a Tamilian household in Chennai, then Madras, which resonate even today.

Waking up to a multi-tasking mother (often an achiever relegated to family sidelines), a hardworking father, and an imposing but doting thatha who thought the world began and ended with mathematics (and education) and that no problem (math or otherwise) was too complex for his grandchildren to solve. Also, the sight of thayir saadam and sambhar saadam ladled by Amma on to open palms along with a dollop of pickle!

There are also anecdotes of school life in a convent, college in Madras and Calcutta, being part of a girl band, and instances that celebrate the ups and downs of life, told endearingly.

It’s the story of an ambitious middle-class girl who was ready to defy the world to make it on her own.

The loving family headed by her thatha figures hugely in Nooyi's life and book – and is the genesis of what she strives for – as she builds her own family.

"We thrive, individually and collectively, when we have deep connections with our parents and children, and within larger groups, whether we are related or not. I believe that healthy families are the root of healthy societies."

And it's those words that come up again and again in her book long after she loses him. "If you take on something, you must give it your re all. If you promise, keep it.”

This sense of purpose and reliability stands out in Nooyi's life as she moves cities and corporations, living the great American dream.

It's evident that Nooyi has tonnes of family support in India, and after she moves to the US for college, climbs the corporate ladder, and raises a family. It's this extended family that she turns to every time – they often stay for long periods as she focuses on her career, knowing that she has loving hands that hold the family together – whether it's her mother, in-laws, or other members of the family who visit often.

The book also reveals organisational support, without which Nooyi wouldn't have become what she is today. Most importantly, it sheds light on how that also plays a part in how she perceives her colleagues and their contribution to the company.

It's heartbreaking and heartwarming to hear her speak of how she was offered six months (of which she took three months) paid leave when her father was diagnosed with cancer.

"I believe I would have curtailed my career by quitting BCG to be with my dad and to help my family, had I not received this paid leave... we would have been in real financial trouble and unsettled," she writes.

Giving it her all

There's also the infamous but authentic account of what happened when she told her mother she was appointed PepsiCo President.

"The news can wait. I need you to go out and get milk," her mother said. And it was almost “as if the world fell around her and us”. Certainly not expected from a mother who had pushed her children to be achievers from the word 'go".

Nooyi quotes her mother, "Listen to me. You may be the president or whatever of PepsiCo, but when you have come, you are a wife and a mother and a daughter. Nobody can take your place. So you leave that crown in the garage."

Harsh words. But one that we find still sting. For you may be the president of the world's largest corporation, but your immediate priority at home may be to get milk!

This incident, gender stereotyping, and conforming to specific standards is not an aberration. Nooyi speaks of wearing an ill-fitted suit to an interview and wearing a sari to work every day at her summer job at Booz Allen.

She writes, "I wore a sari to work every day but never visited the client. Taking me to a client meeting in Indianapolis in a sari would have been too jarring in those days. At the time, I fully understood and accepted my colleagues' leaving me behind. It seemed a small price to pay."

That she cracked the job interview in a sari deserves acknowledgement from all women. A small success!

The winner does not stand alone

The road to the CEO's office was not easy. She admits it's not easy for other women even today. But the memoir highlights a winning blend – a supportive family, supportive organisations, and the will to fight.

"There is no single reason why more women don't lead big companies. There is no list of 10 items that simply need fixing. There are hundreds of issues—some tiny and difficult to pinpoint and some huge and structural—that add up to make it so. Despite all the progress we have made, the modern workplace is still replete with damaging customs and behaviours that hold women back.

"This is gender bias—and it affects every woman's success. In some cases, women make the completely rational choice to move on or try something different to pay their bills. In other cases, this bias just grinds away at their confidence, which then affects their competence, and, at some point, attacks their performance. I think many people get caught in this doom loop."

10 books that will help you build the next startup unicorn

Up the slippery, steep ladder

She also underscores the fact that women are climbing a more steep and slippery ladder than men.

"I think back to my days at BCG when one partner would never make eye contact. He spoke to me, looking squarely at men on our team. As a young consultant, I wondered what put him off: My wardrobe? My looks? Something else? Years later, a colleague casually told me that he behaved that way with all women and people of colour.

“Similarly, umpteen times over the years, I was addressed as ‘babe’ and ‘sweetie’ and ‘honey’. I put up with it until I finally felt I had enough power in the job marketplace to take a stand with the new boss at ABB and just leave."

Often referred to as a “quota hire”, when she joined PepsiCo in 2004, Nooyi proved herself many times over, remaining the longest serving woman CEO of a company this size. She is vocal about organisations' proper bias training, creating an inclusive environment, and stepping up on pay parity.

Putting people first should be at the core of every organisation.

Nooyi tells us how she decided to write to the parents of all senior executives at PepsiCo.

"Over the next 10 years, I wrote hundreds of notes, thanking mothers and fathers for the gift of their child to PepsiCo. I also wrote to the spouses of all my direct reports, thanking them for sharing their husband or wife with PepsiCo. I worked with my chief of staff to help personalise the letters for each recipient."

This unleashed a chain of emotions – here was a CEO who was accessible to every employee and took her thatha's words everywhere she went. "Giving it her all".

That crown – we must insist – must remain on her head – and not in the garage. Nooyi continues to inspire millions of young women to follow their dreams and aim big. For big is better. Always.