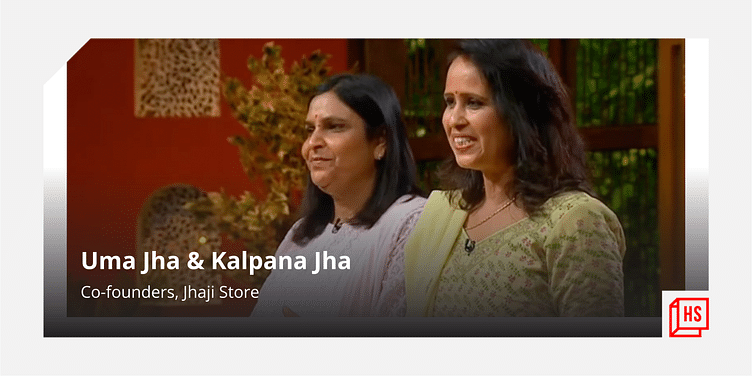 Kalpana Jha and Uma Jha founded the JhaJi Store in June 2021 to produce and sell traditional pickles and chutneys from the Mithila region. The sisters-in-law became hugely popular after they pitched their business on Shark Tank India.

When sisters-in-law Kalpana Jha and Uma Jha made their pitch on Shark Tank India, they wowed their judges with their simplicity and commitment to their business.

They had started ﻿Jhaji Store﻿, an enterprise that produces traditional pickles and chutneys of Mithila, in Bihar in June 2021 and the startup was slowly gaining popularity when Shark Tank India happened.

The first-time entrepreneurs were unfazed as the Sharks posed one question after the other. They had come fully prepared and, as they used terms like ‘average order value’, it was clear that they had big dreams about the future.

Though their pitch did not receive any funding from the investors, overnight, these women have become household names.

“After our Shark Tank India episode was aired, it’s been overwhelming. People recognise us and our business. The number of orders we were getting in a month, we are getting the same in a day,” says Kalpana Jha.

Fifty-two-year-old Kalpana moved back to their hometown Darbhanga in Bihar after her husband retired from government service. After many years of travelling with her husband in his postings in different cities, she did not want to move back to just sit at home.

“All these years, I did have regrets – not taking up a job or doing something on my own. During the lockdown, my children asked me why I couldn’t take up something that interested me. Since I was good at cooking and making pickles specific to the Mithilanchal region, they suggested I start making pickles to sell them to others as well,” she says.

The tastes of Mithila

She roped in her husband’s sister, Uma, a teacher by profession to help her in the business. Her husband invested Rs 10 lakh into the business, and Kalpana's son, Mayank, an IIT-Delhi graduate, promised to help with marketing and distribution. That’s how JhaJi Store came into being, the name fashioned from their surname.

The Jha community is native to Mithila and all Jhas everywhere count Mithila as the homeland. In that sense, the name is quintessentially Maithili, says Uma.

Initially, the enterprising women made pickles in batches and sent them to friends and family for feedback.

“Once we received positive feedback, we applied for a food licence. The first step was to make pickles in bulk to cater to orders once they started coming in.”

While several home-made brands have mushroomed in the market since the beginning of the pandemic, Uma emphasises how their pickles are different.

“We follow the process of our mothers and grandmothers where vegetables for the pickles are locally sourced and sun dried, the masalas are roasted and pounded by hand, and only pure mustard oil is used. There are no added preservatives in our pickles. Everything is natural and fresh.”

The pickles have a registered shelf life of 12-14 months but, according to Kalpana, can last for two-three years.

The duo launched 15 products, all of which, except five were sold out soon after their episode was aired on Shark Tank India. They are now in the process of producing more volumes of pickles to cater to many orders.

The pickles are available in 250 gm bottles priced between Rs 249 and Rs 299, a bit steep when compared to other brands in the market.

Kalpana explains, “We procure all the ingredients from the local market or from farmers. Since we had not started producing in large quantities, our costs of production were high. Now that more orders have started coming in, we plan to increase the sizes of our bottles and reduce prices in the long run.”

The founders have 10-12 people working for them. Apart from the ground floor of Kalpana's house, they took up a 2,000 sq ft place nearby as production increased. The plan is to move into bigger premises soon and make JhaJi Store a full-fledged unit.

The sisters-in-law were a bit disappointed that their pitch did not receive funding from the Sharks. But following their appearance on the show, things changed overnight.

“After our episode was telecast, apart from the growing number of orders, we are also seeing considerable interest from people all over India who want to invest in our business. We are also receiving distributorship and dealership requests from all stages. I am happy our pickles have reached every corner of India,” Kalpana says.

The store has served over 10,000 customers since it launched, and the number is only growing. They have also received inquiries from ecommerce sites like Amazon and BigBasket to stock their products.

“The plan now is to introduce other Mithilanchal specialties like sukhi vadis, makhana, and other items,” she adds.

These two women in their 50s have proved age is no bar for realising their dreams.

“Initially, we were hesitant whether our pickles will appeal to people. Now, after receiving so much love from them, we feel we did the right thing by starting JhaJi Store. Our confidence has skyrocketed,” Uma says.