Why these entrepreneurs decided to launch a D2C vegan bag startup 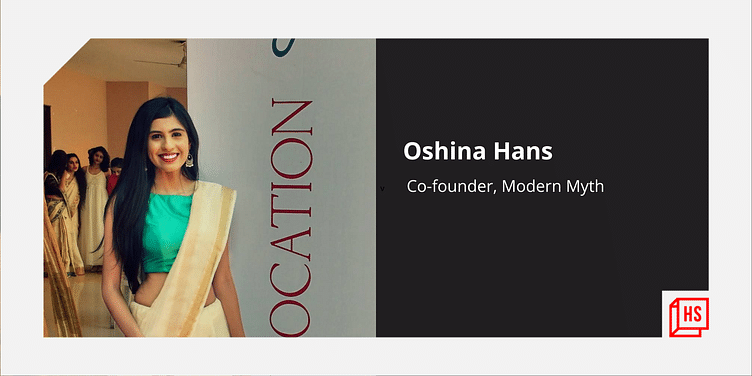 Adopting a vegan lifestyle may be getting easier in India with vegan alternatives increasing across the board, from food and beverages to fashion apparel and accessories.

And Delhi-based entrepreneurs Oshina Hans and Saurabh Tokas are ensuring that people do not compromise on style and fashion when going vegan through ﻿Modern Myth﻿, a direct-to-consumer (D2C) brand that offers affordable, handcrafted, vegan bags.

Oshina is a first-generation entrepreneur; her mother worked as a government employee while her father worked in the armed forces. A graduate in textile design, she was a topper from the National Institute of Fashion Technology and had a promising career with offers to move abroad.

Her mother was initially resistant to the idea of her starting a business and turning away from a high-paying job. “I made her sit down and asked for six months’ time. If it didn’t work out, I would go back to doing whatever I was doing,” she tells HerStory.

In 2019, Oshina leveraged her expertise in textiles and experience working with the artisans to start her own D2C business online. Along with her partner and co-founder Saurabh, she works with a team of 13 artisans and a master. The ecommerce label has introduced more than 140 unique designs with an average price of Rs 600.

Available on Nykaa, Amazon, and Flipkart, its community of over 18,000 followers on Instagram is also a key factor driving the business.

Started with an initial investment of Rs 6 lakh, it clocked in a revenue of Rs 2.5 crore in the last two years of operation.

In India’s competitive bag and accessories market, which is expected to grow by $207.51 million from 2020 to 2025, the entrepreneurs believe their quirky and unique designs are wooing the youth and millennials.

In fact, not long after BharatPe Founder and Shark Tank India judge Ashneer Grover commented on the design and said the products looked like they were taken from Sarojini Market in Delhi, Modern Myth introduced a limited edition sling bag stating Not From Sarojini.

Oshina credits the brand’s success to their team of artisans, and makes sure that she supports their livelihood along with comfortable accommodation and supporting their children’s education.

The mutual trust with the artisans also helped sustain in the initial days of the pandemic.

“Most artisans migrated and there was a huge scare but surprisingly, it did not happen with us because of the trust we have built. We continued working in the small workshop with whatever material was left,” she says.

Being a ‘woman’ entrepreneur

The startup’s initial challenge was lack of visibility in the ecommerce marketplace.

Oshina says the brand was not taken seriously because it was new and marketplaces would not give listing space despite quality crafts and products. But getting listed on Nykaa changed the experience as other marketplaces "started chasing Modern Myth".

However, Oshina shares that she faced a lot of biases as a woman building a business.

“You just can't deny there is a lot of bias. Initially, vendors used to tell me that they don't want to talk to me and to bring some men. When you ask them to show certain things, they will take you very lightly and think you are here for window shopping. That is a big turn-off,” she says.

Oshina adds, “A vendor who is now very close to us took me very lightly and now he also admitted after we started selling that madam, I used to treat you like a child. The same thing happened to an extent on Shark Tank.”

The entrepreneur believes that the best answer to such biases is to showcase your work. Moving ahead, Oshina says “creating brand awareness and marketing is a priority”.

10 foods to help you tackle your period better