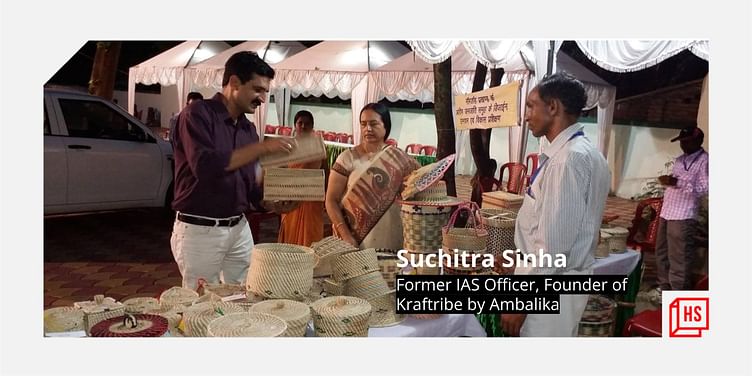 Former IAS officer Suchitra Sinha first visited the Sabar tribe in 1996 when she saw the baskets created by the tribe with locally-grown grass. Since then, she is helping the endangered tribe by promoting and enhancing their craft.

Every weekend, 62-year-old Suchitra Sinha drives 96 km from Ranchi to the hamlets of Saraikela district in Jharkhand to meet the people of the Sabar tribe.

She packs her bags with sweets, clothing items, flip flops, or anything that she can get her relatives and acquaintances to donate for the people who lovingly call her ‘Mai’ (mother).

The former IAS officer has been visiting the tribals for over two decades. She first met them in 1996 when she was posted in Jamshedpur.

“Some people from Bharat Seva Sangha had come to my office to ask for donations for the Sabar adivasis. I knew the tribe was counted among the Particularly Vulnerable Tribal Group (PVTG) but had never met them. Those people said if I wanted to meet the tribals, they could take me to them and I agreed. It wasn’t easy to reach their area as it was Naxal-dominated at the time, so outsiders weren’t allowed,” Suchitra tells HerStory.

When she reached their villages, she found they were the “poorest among the poor.”

“Their houses were made of bamboo tied together and were no more than four feet tall, which they had to crawl to enter. They had barely anything to eat and had broken utensils made of clay to cook food,” she recalls her first visit to Nimdih block in Saraikela district, Jharkhand — considered one of the most backward areas of the country.

She continues, “I was told if people from Bharat Seva Sangh stop distributing food to them, they would have no option but to eat dead animals. The kids had no clothes to wear.”

An endangered tribe among adivasis, with barely 216 families, Sabars are predominantly dependent on the forest for their survival.

For decades now, the tribals have been making baskets by weaving six feet high Kansi grass, abundantly available in the area, with Date leaves. Sabars sold these baskets for a meagre Rs 50.

Suchitra was deeply perturbed by the state of the Sabars and equally intrigued by the baskets they made. Soon, she shelled out government funds reserved for the betterment of tribals to give them food, poultry, etc. However, she knew this wasn't a sustainable response to their condition.

Sombari Sabar, a 12-year-old tribal orphan with no money, strives for academic excellence

In 1998, she was transferred to New Delhi, where she brought one of the tribal’s traditional baskets gifted to her. She showed it to the Handicraft Development Commissioner, who was very happy to see it and gave her five projects to upgrade the traditional craft of Jharkhand.

Through these projects, Suchitra connected with designers from NIFT in Delhi and sent them to the hamlets to work with the adivasis to enhance their craft and design.

Suchitra started her work with the tribals of three hamlets – Bhangat, Makula, and Samanpur – out of the 12 hamlets inhabited by the Sabars. Gradually, she reached all 12 hamlets.

They created 152 prototypes, including bags, table lamps, planters, decor items, baskets, etc., which she brought to Delhi to exhibit to the officers of handicraft design.

In fact, she showed the products to renowned people like Jaya Jaitly, Founder of Dastkar Haat Samiti in 1986, and craft activist Laila Tyabji, among others.

“It was interesting to see the NIFT designers talked in English and the adivasis don’t even know Hindi, but after one month of working together, they both had tears in their eyes,” Suchitra recalls.

In 2002, Suchitra set up Ambalika NGO for the development of the Sabar tribe and better promote their craft.

Although getting government and corporate projects became slowly difficult, Suchitra kept at it and grabbed whatever she could for the Sabars to get better employment.

However, by 2005, the Naxal dominance increased in the area, and she had to put a stop to her work.

“I had to take a back step, stop the training because the safety of the designers and others was of utmost importance. By then, the Sabars had learnt to make different items with the grass, but when we got to the stage of promoting these hand-crafted products, we had to stop our work,” says Suchitra.

She adds if the government officers tried to visit the area, there would be bomb blasts. She stopped visiting the tribals, but she couldn’t stop thinking about them.

“It was in 2011, and the India International Trade Fair was about to start in New Delhi. I took this opportunity to form contact with the locals again to bring 15-20 Sabars to the trade fair, and I managed to do that. Their products were not that great as they had forgotten the design in all these years, but to bring them to the city for the trade fair from such a disadvantaged area was an achievement,” she says.

And, there was no going back for her. Suchitra started her work with the Sabars with full force. In 2012, she got them an offer to make hand-crafted file folders for the BRICS Conference held the same year.

When the adivasis saw their earnings increase, their confidence in Suchitra became strong and they drove out the Naxals from their area.

Nonetheless, the tribals are extremely protective of the area and don’t encourage civilian encroachment. Hence, they shoot arrows at anyone who visits them. Because of this, government aid like healthcare, education, and sanitation doesn't reach them.

Amidst the pandemic, when some of the tribals fell sick, Suchitra called for health workers, who, when reached the hamlets, had to put Suchitra on the speakerphone for them to enter.

She also got the government to donate an unutilised building in the district to the tribals, now used as a work centre where they make their products.

When in the late 90s, the Sabars were struggling to make Rs 500 - Rs 600 per month, they now make anywhere between Rs 4000 - Rs 7000 monthly owing to the consistent efforts of Suchitra, she claims.

Their products, priced anywhere between Rs 600 - Rs 3000 are listed on ecommerce giant Amazon, and Suchitra, too, sells these products through Krafttribe by Ambalika, an ecommerce online platform.