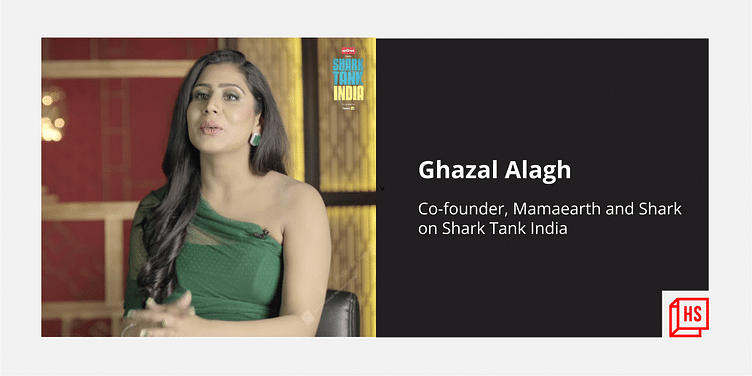 Ghazal Alagh, co-founder of baby and mother care brand Mamaearth, and also a Shark on Shark Tank India, speaks about her experiences on the show and how it has helped entrepreneurs gain a wider audience.

The first edition of the desi version of Shark Tank has taken the nation by storm – with the show and its entrepreneurs discussed in the media and beyond.

The Sharks and the entrepreneurs have become subjects of everyday conversations. Even those who did not receive any funding on the show are now overcome and overwhelmed by what it has brought them – recognition, fame, and in some cases, external funding.

“My 85-year-old grandmother and my seven-year-old son watch the show together. My grandmother talks excitedly about pitching and equity in the same vein. Never before has she asked about my business,” says Ghazal Alagh, one of the seven sharks on Shark Tank India.

“In fact, my son recently said he would pitch an idea, and I should give him Rs 2,000 and he would give me 20 percent equity in return,” she says with a laugh.

Ghazal, along with her husband Varun Alagh, runs ﻿Mamaearth﻿, a baby and mother care brand that achieved unicorn status in 2021. In January this year, the company raised $37.5 million in a round led by Sequoia at a valuation of $1.2 billion.

Interestingly, Ghazal missed the email sent by Shark Tank India and Sony Television for five days, and only when her team reminded her did she read it.

“Fifteen days prior to this, I came to know I was expecting my second child and Varun and I decided we’d go slow at least on the PR side and focus on health and family. The team was consistent and persistent – two values I live by, and constantly following up with me. And since, I have learned so much by watching Shark Tank USA that I agreed to be a Shark in the end,” Ghazal says.

While Ghazal did not appear as much on the show as others, she says it made a lasting impression on her as an investor, entrepreneur, and a person.

The most important thing, she points out, is that contrary to people’s beliefs, the Sharks were asked to be ‘who they are’ on the show.

“It brings out our true personalities. And we were not cued in to behave in a certain way. We were the way we are in real life,” she says.

She reveals that however, in real life, one is asked to hold back emotions and take decisions that are good for business, that can bring in good returns. She too went into the show with the same conservative mindset but later changed.

“I enjoyed talking to people and a pitch would last anywhere between 45 minutes to one hour 15 minutes. You need to make an instant decision and it was both exciting and fun,” she adds.

“I was so happy so see so many entrepreneurs who were not pedigree oriented; regular people who came from small towns and never had access to an investor circle, come to this platform for help to scale their businesses.”

Among the pitches that stood out for her were ﻿Wakao Foods﻿ – a vegan meat alternative made from jackfruit, anti-suicide ceiling rods, and The Sass Bar – an artisanal soap and skincare brand.

As Shark Tank India comes to an end soon, Ghazal lists some important takeaways from the experience.

“I have always worked hard for money and sometimes when you are investing, you are a little more cautious about how this would pan out because it’s new and recent. I saw myself a lot of times taking that cue where I thought that it did not make business sense but emotionally it does, and you question yourself whether to go ahead or not,” she points out.

Ghazal believes she has learnt not to be strict with herself.

She also regrets not investing in some deals. “Outside the show, when you are investing, you have multiple conversations, multiple ways of checking the product and take time to make a decision. I wasn’t very strong about instant decisions. I learned to be in their shows, be empathetic and kind, thinking of my own experience at pitching five years ago.”

She vocalised what a lot of people also feel about the show in general.

“Even if you are not investing, there’s no need to be harsh. The person hearing those words will never forget what you said. Give them feedback to help them move in the right direction,” she says.

“We have always been a very women-oriented brand. Empowering women actually means giving them the opportunity to prove themselves. While hiring for any position, we look at a 50-50 split while looking at the CVs so we are solving at the grassroot level itself. I also strongly believe in leading by example,” she says.