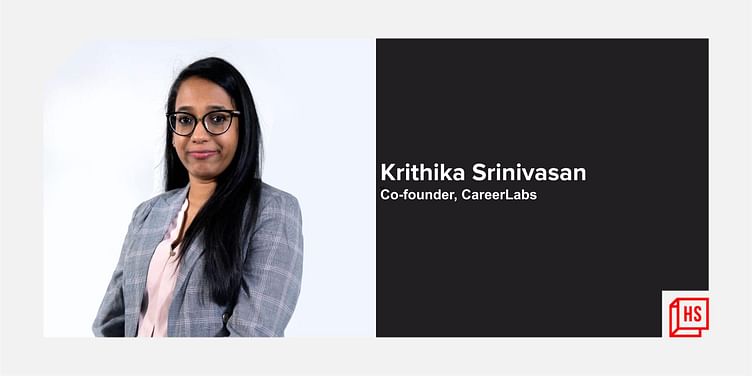 Former BYJU’S exec Krithika Srinivasan launched CareerLabs in 2019 to help students with higher education abroad and get placements. In an interview with HerStory, she speaks about how her career went from designing three-wheeler autos for TVS Motors to helping people steer their careers better.

After a successful five-year stint with ﻿BYJU'S﻿, where Krithika Srinivasan set up admission consulting services, she co-founded edtech startup ﻿CareerLabs﻿ with PN Santosh and Prasanna Alagesan in 2019.

Krithika didn't start her career in the education and recruitment field. A gold medalist engineer who graduated in 2003 from PSG College of Engineering, Coimbatore, she started her career designing three-wheelers for TVS Motors. She says she was lone woman engineer in the team testing auto rollovers.

After working for three years, in 2006, Krithika decided to study abroad. She recalls that she applied to study double master’s in automotive engineering and mechanical engineering at the University of Michigan by looking at the top-three university rankings in the world.

“I didn’t have any idea about the process of applying to universities abroad. I sent my application only in the last 10 days before the deadline, and those were the days of sending applications by speed post. It was also hard to find someone who would fund the course without any collateral. So, my father had to take the loan at exorbitant rates on my behalf to pay my fee. Luckily, my seniors over there took me under their wings, but for a non-starter it would be tough to figure out the entire process,” Krithika recollects, adding that most people just don’t go abroad for studying but also to make a career.

In hindsight, she believes that better knowledge of possible careers available and how the graduate programme can impact the decision would have helped her in her decision-making process.

During her master’s, Krithika got a chance to study marketing from Ross School of Business and that formed the basis of her entrepreneurial journey as she attributes most of what she does now to what she learnt there.

In the five years that she was studying in the US, she worked on various projects around building 18-wheelers and smart bridges.

“I am an engineer who chanced upon admissions consulting for BYJU’S, which I set up for them. I worked closely with 6,000+ students, helping them study abroad. When we were working with these students, we realised that many students wouldn’t go abroad because they would have to start their careers. By that time we were connected with around 150 colleges and training and placement officers, and so we were able to do really well in the higher education space. We were able to scale studies abroad much higher and in an ethical manner, which was something that was missing earlier,” says Krithika.

From higher education, they moved towards placement of fresh graduates in MNCs and since BYJU’S was dealing with school students up to 12th grade, they decided to launch CareerLabs.

With growing higher education opportunities abroad and more and more young people aspiring for a career in developed countries, demand for career counselling and placement programmes has also increased.

A 2021 survey by IC3 Institute Student Quest Survey says that over 71 percent of students think critically about future employment. This is why edtech startups have been on the rise since the last decade. With BYJU’s topping the charts, Mumbai-based Insciple, edu fintech platform EduFund, Delhi-based Mindler, and Career Clinic are some of the other upcoming edtech platforms driving careers of the Indian youth.

According to Krithika, what sets CareerLabs apart is that even when they were helping students study abroad, they realised that not everyone has a profile conducive to their goal of studying abroad, and so they built a programme called Profile Builder to build the profiles of aspiring students and graduates.

Currently, it mostly caters to engineering students and graduates who studied from colleges in small towns and are struggling with placements.

“Predominantly, we’re focused on engineering students and then we're venturing into non-engineering courses as well. The idea began with solving the issue of how tier II or tier III engineering students get a job, which is beyond their imagination. We wanted to help people learn and earn better,” adds Krithika.

In just about two years, Bengaluru-headquartered CareerLabs has branched out to having offices in Pune, Delhi, Hyderabad, and Chennai.

The bootstrapped startup raised $2.2 million in a pre-series A round from Rocket Internet’s VC fund, GFC, and various other angel investors in April 2021.

Krithika claims that the startup has reached out to more than two lakh students and is projected to hit Rs 75 crore annual recurring revenue (ARR) by the end of 2023.

She adds that women participation is between 25 to 40 percent across courses.

“In fact, female candidates are given preference (based on company requirements) in some of the courses,” she says.

As women lack representation in STEM leadership and CareerLabs deals mostly with engineering college students, Krithika says a large number of women are applying for these programmes. They also help people with experience to get into B-Schools.

“We have users with five-six years of experience wherein the number of women applicants dips,” shares Krithika.

Challenges and plans ahead

Working for an established brand like BYJU’S helped Krithika build a network, but to launch a startup and reach colleges in tier II and tier III was a challenge. To build our credibility is why we started with a profile builder programme, says Krithika.

“Corporates wanted recruits from us to become our clients and hence we started with tier I colleges and then slowly went down the ladder. So, the first challenge for us was to prove that we had a plan that would work for both students and corporates,” says Krithika, adding that COVID-19 came as the second challenge for them.

“We are a B2B2C company, which means that we had partnerships with colleges through which we reach students, but as the colleges were shut, we couldn’t have any on-ground seminars and everything was virtual. Right when we were to enter peak season when colleges reopen, COVID-19 happened,” she adds.

Started with 50 employees in 2019, CareerLabs today employs over 250 people, of which, Krithika says, 45 percent are women.

In the next few years, CareerLabs aims 10x growth consequent to its market outreach and penetration across tier II and tier II cities. “The company is also looking for more industry-partnered Assured Placement Programs and partnerships in line with its aggressive expansion plans.

The focus is going to be on scale across new geographies, new products, and services built on the ELEV8 App. Doubling across all metrics in the company, be it revenue, team size, regions or customer base, the company aims to enable and empower the lives of millions of students from every corner of the country,” shares Krithika.