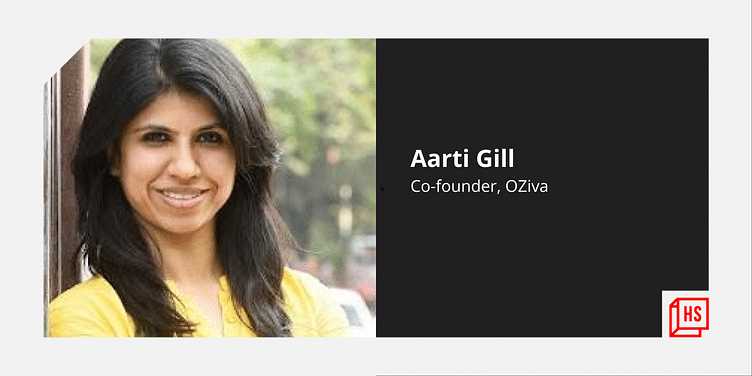 With two rounds of VC funding amidst the COVID-19 pandemic and roping in Deepika Padukone as its brand ambassador, Mumbai-based D2C brand OZiva is going big on holistic health and wellness.

Aarti Gill was aware of the latest innovations in the preventive healthcare sector long before she decided to startup in the space. She was inspired by her mother, who served as an officer with the Punjab government’s healthcare department.

In 2016, Aarti — an IIT Roorkee and INSEAD alum — launched ﻿Oziva﻿ to nudge Indians towards a healthier lifestyle by offering plant-based and organic nutritional products.

The increased awareness around health and wellness found amidst the COVID-19 pandemic today was still a few years away.

According to Statista, the health and wellness market was estimated to be $8.4 billion in 2018, and was expected to reach nearly $16 billion by 2023. Peers competing in this market space include The Himalayan Organics, Pure Nutrition, and Cosmic Nutracos, among others.

Tapping this industry, OZiva has diversified into plant-based vitamins and minerals, clean nutrition for children, and clean beauty.

“We started as a nutrition brand for fitness. But now, we have evolved into a holistic health and wellness brand,” Aarti tells HerStory.

The pandemic led to a spike in demand for health and wellness products, and OZiva’s revenue saw a sharp rise from Rs 21 crore in FY19 to Rs 73 crore in FY20.

Moreover, the entrepreneur is confident of closing FY21 with a total revenue of Rs 120 crore.

Backed by VC firms like Eight Roads Ventures, F-Prime Capital, and Matrix Partners India, the Mumbai-based startup had raised a Rs 125 crore Series B round in March 2021 and a $5 million Series A round in 2020.

A digital native brand, OZiva conducts its business on its website and marketplaces like ﻿Amazon﻿, ﻿Flipkart﻿, ﻿Snapdeal﻿, and ﻿Nykaa﻿, along with a handful of offline stores.

Thanks to its digital infrastructure, the startup thrived as a direct-to-consumer (D2C) brand amidst the pandemic. At present, it aims to strengthen its retail presence across India.

It is only a matter of time before India sees more women in tech entrepreneurship: Nykaa founder Falguni Nayar

While the COVID-19 accelerated digital adoption, the pandemic-induced behaviours are waning off, and Indians are going back to the familiar retail shops — and so is OZiva.

Spelling out its retail plans, Aarti says she hopes to unlock the brand’s presence in the first 10,000 stores, followed by 40,000 and one lakh outlets in the next three to four years.

To achieve this, OZiva wants to expand its retail presence in the top six to eight cities, including Hyderabad, Mumbai, Bengaluru, Delhi-NCR, Pune, and Chennai, which contribute to 40 percent of the brand’s revenue. At present, OZiva has a retail presence in 6,000 cities.

The entrepreneur says offline retail allows for an easier, more targeted approach to penetrate further into these cities rather than blindly opting for a distributed, expensive strategy.

“These are class A and B stores, where customers enter to pick and choose products for themselves, which allows for greater discovery, compared to smaller shops, where customers ask shopkeepers to hand out products,” Aarti explains.

“Pricing has been a constant concern because people are not likely to spend Rs 300 to Rs 500 just to experiment with something. But, sachet products improve the trial process because one doesn’t have to think a lot before spending,” she says, adding that it has enabled an increase in cross-selling and trials among customers.

At the same time, Aarti is well aware that it is eventually a game of trust and habit building in the health and wellness space. Consumers are always wary of usage, side effects, and how long one must use products to see results, she says.

Priced at Rs 499 for a six-month subscription, OZiva hopes to build a push ecosystem by offering free nutritionist consultation to members and generating content constantly to give them easy access to lifestyle-related information and OZiva’s offerings.

Having seen a cumulative growth rate of 140 percent in the last three to four years, OZiva hopes to clock a revenue of Rs 120 crore this financial year and targets about 70 percent annual growth in the next two years.

On the other hand, Aarti says, the company's expenses have also increased.

According to her, OZiva spends most of its capital on building categories, increasing offline footprints, building brands and digital products, and investing in its innovation lab for research and development.

With over 30 scientific studies and two patents under its belt, the brand’s USP lies in a strong foundation of science and research. With a key focus on women’s health and fitness, some of its products include HerBalance for those dealing with PCOS, Hair Vitamins, and DHT Blockers.

From the bank of innovations in its lab, OZiva’s marketing team takes a call on the products to launch, introducing four to five products each quarter.

Aarti says a few of its products emerge as hero SKUs, and often, the formulations are tweaked further based on market comments and the initial experience of the consumer.

“But, the key is to see if there is a problem that consumers are talking about, and we can solve it before venturing into a new category. Then, we look at the solutions available in the market, what we can come up with, and the promise of the market size,” she explains.

Moving ahead, Aarti says the brand will invest further in communicating and ensuring the consumer understands the scientific aspects of its proprietary ingredients.