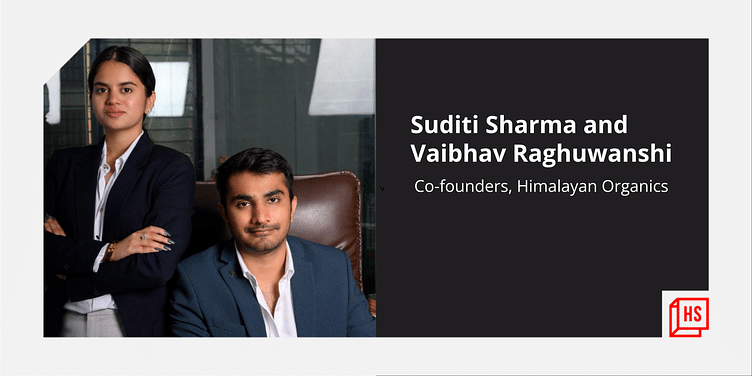 Based in Indore, MBA graduates and vegetarians Suditi Sharma and Vaibhav Raghuwanshi are solving the dietary supplement dilemma for vegetarians in India with their plant-based alternatives at The Himalayan Organics.

India is home to more than 400 million people identifying as vegetarian, the highest of all countries. College friends and MBA graduates Suditi Sharma and Vaibhav Raghuwanshi reconnected over their shared experiences and challenges to start ﻿Himalayan Organics﻿

A lot of vegetarians compromise on nutrients like Omega 3 that was earlier only available as fish oil in India and not as a vegetarian dietary supplement, the founders said.

To address this gap, Suditi and Vaibhav embarked on their entrepreneurial journey to address the gap in dietary supplements market by founding Indore-based Himalayan Organics (under the parent company Vlado Sky Enterprise) in 2018.

Meet the women at the heart of India's booming fintech landscape

Key to winning the market was educating and spreading awareness on dietary supplements among the public. A direct-to-consumer brand, it offers affordable and natural dietary supplements including 55 plant-based and 25 organic certified supplements, along with free lifetime doctor consultation and dietician support to all the customers.

It has a team of professionals experienced in dietary supplements and pharmacy, who prepare the formulations in-house while manufacturing is outsourced to a third party. The Himalayan Organics is setting up its own manufacturing facilities at the moment.

Priced between Rs 450 and Rs 1100, the dietary supplements are available on 20 odd marketplaces such as Amazon, Flipkart, Nykaa, Purplle, Nutrabay, 1mg, Pharmeasy, in addition to its own website.

Currently focused on online channels, it is in the process of expanding the offline network through partnerships with chain stores. Vaibhav says the brand will be present in 1500 to 15000 offline stores in the country.

Having served more than 10 lakh customers since inception, the entrepreneurs claim that 75 percent of its current buyers are repeat customers.

“Our USP lies in the fact that all ingredients are authentic and derived from the Himalayan region as well as in making the supplements organic and plant-based - we are the first ones to introduce that in India ,” Vaibhav says.

India dietary supplement market was valued at $3924.44 million in 2020 and is expected to grow at a compound annual growth rate (CAGR) of 16 percent till FY2027, according to TechSci Research.

The co-founders of Himalayan Organics note that pandemic accelerated the awareness of dietary supplements as there was increased focus on immune health and general well-being.

Started with an initial investment of Rs 40 lakh and bootstrapped till now, the startup has remained profitable since inception. It will be closing the financial year ending March 2022 with a turnover of Rs 40 crores.

Like any entrepreneurs, they faced their share of challenges while starting up. Hiring was a key challenge, especially in a tier II city like Indore where it is difficult to find experienced people -- as most people move to metro cities.

Besides managing hectic schedules as an entrepreneur, Suditi felt that people responded or treated her differently during the initial stage because she is a woman.

Moving forward, the duo hopes to tap the dietary supplement market outside India as well.

Would you hire a pregnant woman? Yes, say top companies as they roll out more benefits for expectant and new mothers