From dropping out in Class 10 to bringing one million Indian women farmers together on Facebook, the story of Savita Dakle 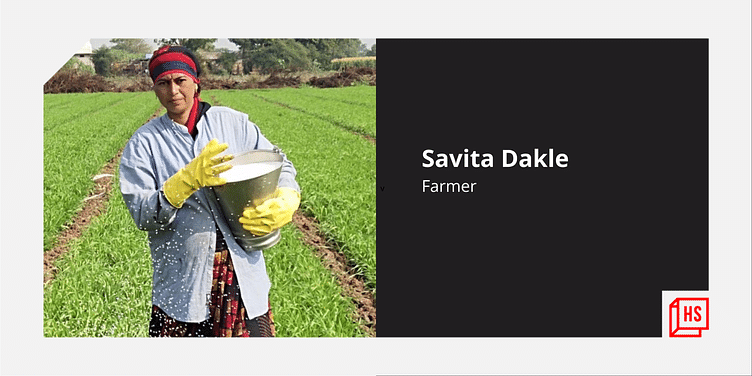 Based in Pendagaon village in Maharashtra, Savita Dakle is empowering women farmers in rural India by connecting them on Facebook.

Thirty-six-year-old Savita Dakle is unmistakably a go-getter, and this attitude has helped her learn and excel at farming, bring together over a million women farmers across India on Facebook from her in-law’s home in Pendagaon, Aurangabad, and overcome periods of financial difficulty in her family.

Despite building a thriving community for women farmers, the thing she takes pride in most is being able to run her household in Aurangabad with just Rs 9,000.

Savita was in seventh grade when the company where her father worked in Aurangabad shut down, and the family faced financial difficulties. Meanwhile, her mother began earning a living as a vegetable vendor in the city.

“One day, I was told by the school to ask for Rs 1000 for uniforms and books or buy them, but I never told my father. After a few days, the teacher called him and came to know he was clueless and my father started crying,” Savita recalls in a phone interview with HerStory. Soon, her parents moved to the village to try farming while her two elder sisters got married.

In 2002, she was married into a family of farmers in Pendagaon, and this was the beginning of her life in the village as a farmer.

Recently, Savita harvested a bumper wheat crop. “It has been an amazing experience for me to get the opportunity to live the life of a woman farmer, I followed all the steps to prepare the field, sow the seeds, water the crop, learn the nuances of farming and use a tractor,” she wrote on LinkedIn. A mighty feat for someone who had never known farming owing to her early years in the city, o.

Savita was introduced to working in the farm by her in-laws when they enrolled her as an agricultural labour (mazdur), earning Rs 200 per hour. “I had never worked on the farm before, but I always had a lot of confidence that I could do anything,” she says.

When Savita initially wanted to join the village’s Seva Samta, where women gather to discuss farming practices and challenges, she was forbidden by her in-laws. However, when she got the opportunity to attend one such meeting, she did not miss the chance, and convinced her husband and in-laws to let her attend.

“I told them I’ll work two extra hours later and stayed because there was a lot of information being given out. My in-laws later scolded me so much that I cannot express how much I had to bear for just those two hours,” she shares.

Not one to get disheartened, Savita applied for a membership with the Seva Samta, and after a three-hour long interview on how to spread awareness around best practices in farming, she bagged an entry into the community group. With a working knowledge of how to use phones and social media, Savita started her role with a Jio phone her father had given her before marriage, and one of the first things she did was create a Facebook group!

Beginning with 400 women from her village, Savita trained them to efficiently use the phone and social media platform. She now manages two Facebook groups - together they comprise over a million women farmers from across India.

“People used to tell me that I am always busy on the phone, but I knew what I was doing. Still, I never imagined creating such a huge group of women farmers. I never thought I could bring women farmers together this way."

The community now discusses everything related to farming - from tips and tricks of sowing and harvesting different types of crops to pricing them in the market.

Most women have little knowledge of how things work, especially when it comes to the cost of products, buying and selling things, etc. I” learnt by stepping out, networking, and insisting on going with my husband to understand why and how much to pay,” says Savita.

In a clear sign of her inspiring nature, women in Savita’s village used to be surprised when Savita went out to pay the electricity and other household bills, but today, many of them take charge by using mobile wallets and payment facilities to make their own payments.