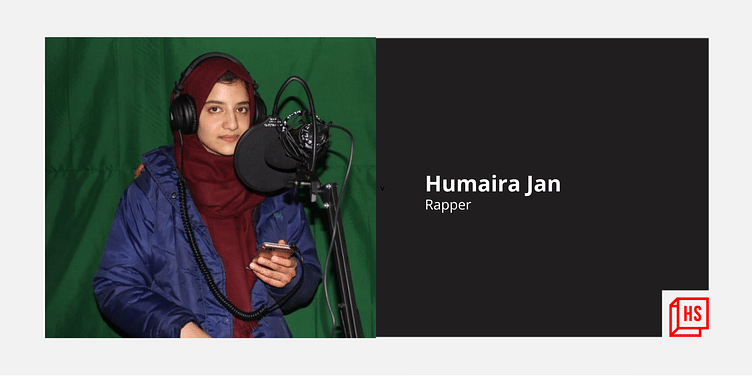 Thirteen-year-old Humaira Jan, a Grade IX student at Army Goodwill School in Thune Kangan in Central Kashmir’s Ganderbal district, is a rapper passionate about the status of women in the society and what could be done to make our lives better, and meaningful.

This is also the hook of her first rap song, Aurat, that talks about a time – when mindsets will change, and so will attitudes, society, and how women will ultimately make history with their choices.

Wise beyond her years, Humaira tells HerStory, “My passion for rap comes from the will to change things. I am not doing this for fame or to become a sensation. I rap on subjects I feel strongly about, and women’s empowerment figures largely in what I want to communicate.”

But fame has sought Humaira ever since she chose to go off the beaten track and rap her feelings, frustrations, and hope for a better world.

In 2015, when Humaira was in Class II, she was introduced to YoYo Honey Singh’s rap album Desi Kalakaar by her father, and she was hooked.

“I started following hip hop artists and singing their songs. I didn’t take it too seriously in the beginning, just sang along without thinking too much about it,” she says.

Her life changed after she entered a rap battle in Ganderbal district in August last year. She heard of it from her teachers and principal at school, who were now quite used to Humaira rapping before the start of every event. At home, her parents were supportive and encouraged her to do whatever she wanted to.

When she turned up for the event, she was the only girl among 15 male artistes, some of them professional rappers.

“The first reaction from others was how could a young girl rap. They laughed and made fun of me,” she says.

The joke, however, was on her naysayers as she performed top rapper RCR’s Maa and came first in the rap battle.

This prompted Humaira to take hip-hop seriously. She had to first work on her own lyrics and what she wanted to convey to her audience.

“I gave myself a one-month break after the rap battle and then wrote Aurat, an ode to women’s empowerment. The song exhorts society not to discriminate based on gender and women can do anything if they put their minds to it,” she says.

It was also prompted by an acid attack on a woman in Srinagar, reliving the disturbing circumstances young women in the Valley live in.

“One keeps hearing, a woman should do this, not do that, sit at home, she faces so much in life and remains quiet, though she is capable of so much. Why not give her opportunities and allow her to make her own choices,” she asks?

Aurat received its fair share of criticism and trolling. Even friends and a few relatives thought it was wrong for a girl of her age to be on social media, even worse rap so openly.

But Humaira, continues, undeterred, with the help of her parents and sisters who motivate her to speak up on different issues.

“Women’s empowerment will always be a part of my songs. I’d also like to speak on the rampant drug use among boys and girls and on conserving nature,” she says.

Humaira’s story has been featured on several television channels and is also the subject of a recently released short film that takes viewers through her life as a girl rapper growing up in the Valley.

Interestingly, many years ago, Humaira was a double for Shahida, one of the main characters in Salman Khan’s Bajrangi Bhaijaan. But she chose not to follow the acting route.

“I wanted to be an actor but couldn’t get enough opportunities in my region. Thankfully, rap has now become my life,” she says.

Her favourite hip-hop artistes include MC Bella from India and XXXTENTACION from Hollywood.

She wants to continue to rap and collaborate with other artistes in India, especially Raftaar, whom she admires a lot. “It’s my dream and hope someone can introduce me to him,” she says.

Humaira understands that the road ahead will not be an easy one. But she is determined to face challenges as they come. This is also her advice to young girls like her who want to follow their dreams.

“There will be many people to pull you down. Don’t let their words affect you, otherwise you will feel miserable and disappointed. I am not an idol or a sensation, I have had my fair share of trolls and negative comments. I only look at the positive ones and move ahead. Life happens only once, I don’t have time for regrets,” Humaira says.