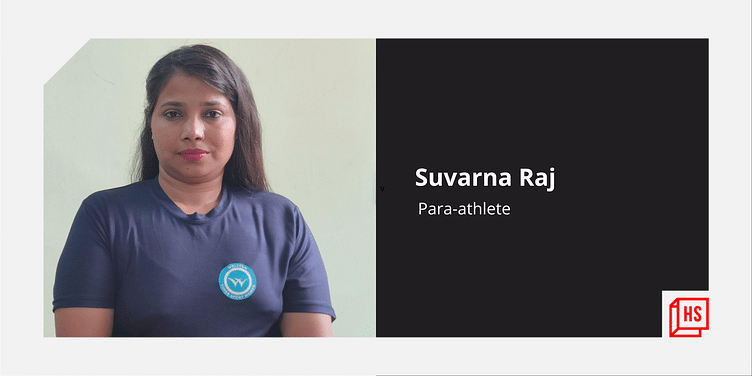 Stricken by polio at the age of two, Suvarna Raj battled many odds to become a well-known para-athlete in powerlifting, table tennis, and now athletics. A disability advocate and activist, she wants to start an academy for disabled children.

In 2015, when para-athlete Suvarna Raj was participating in the 18th National Para-athletic Championships in Panchkula, Haryana, she was in for a rude shock.

“The washrooms were not accessible for the athletes, and we were all asked to sleep on mattresses that were laid out in a huge hall. How could one even perform under such circumstances?” she tells HerStory.

"Sir, now is 11:25 PM (yesterday), we two women with disabilities are standing on the road at Tau Devilal Stadium, Panchkula. There is no one from PCI (Paralympic Committee of India) to help us. We can’t use the toilets here because the toilets are not accessible, they people doing same and insulting us.”

Following this, the para-athletes were shifted to better accommodation like hotels that provided them accessibility. But Suvarna says she had to bear the brunt of her “activism”.

“When I went to the venue, they didn’t allow me to play (table tennis). I complained to the disability commissioner who asked me to play the next day. I refused as I had lost my chances of winning at the event where I was sure I would bring home a medal,” she says.

In another incident, in 2017, while travelling on the Nagpur-Nizamuddin Garib Rath, Suvarna was allegedly forced to sleep on the floor after railway officials and co-passengers refused to give her a lower berth in exchange for the upper berth allotted to her.

Every step of Suvarna’s life has been about fighting the odds.

Born in Nagpur, she was stricken by polio when she was two years that affected movement in both her legs. Suvarna suffers from 90 percent disability and is wheelchair-bound.

“I was enrolled in hostels from a very young age because my parents could not take care of me. It’s there I learnt different types of sports, but took up powerlifting on the insistence of my teachers,” she recalls.

Suvarna pursued the sport from 2002 to 2008, winning many medals in national-level championships in the process. She also completed her BCom and MCom, married, and moved to Delhi where she completed a master’s in social work.

It was a trying time when she lost her baby in-utero. Afflicted by jaundice, bed-ridden for almost a year, it almost took two years for her body to recover. By that time, power lifting no longer remained a choice.

From weightlifting to athletics

Suvarna took up table tennis, following in the footsteps of her husband Pradeep, and began participating in different national and international tournaments.

In 2014, she participated in the Asian Para Games in Korea, and won two medals at the Thailand Para Table Tennis Open 2013 held in Bangkok.

However, she quit the game in 2017 ruing the lack of national-level competitions since 2012 and the lack of sponsorships.

At the end of 2017, she chose athletics with a focus on shot put, discus throw, and javelin. She has won medals in national events and has qualified for international tournaments as well. She says that associating with Welspun as a sponsor has changed the course of her career in sport.

“There are many foundations helping para-athletes. But I find Welspun is always open to investing in athletes from ground up and not necessarily the established ones. This is a model, I believe should be replicated,” she says.

The success of the Indian team at the Paralympics last year has also brought in hope for para-athletes.

“I am happy para sport is getting the attention it deserves. More people are aware of the opportunities now and I hope this will bring talented sportspeople into the limelight,” she adds.

Despite her efforts, Suvarna explains there is very little awareness about the rights of the disabled, especially in villages and small towns.

“People are not aware of the Rights of Persons with Disability Act. They are not aware that places like parks, theatres, and other public places should be made accessible. There are also many schemes to aid the disabled.”

Sensitisation, she says, is very important for the disabled to live with pratishta (dignity).

“The problem begins from the family. My family sent me to hostels because they did not want to take care of me. Not many people knew that my parents had a third daughter. My father refused to look me in the eye. I was always isolated.”

Suvarna says there were times when she wanted to give up and take her own life. However, she banked on a good circle of friends to get through the difficulties in life.

Her parents came around only when she began getting fame, internationally.

She sadly mentions, “A family becomes disabled when they have a disabled child. There are very few children with disabilities that get the love of their parents. What is the use of love and affection if you don’t get it at the age when you needed it? People call me an angry person – they don’t understand the anger that comes from trauma.”

Her plan is to continue to raise awareness on the rights of the disabled.

“It took me 34 years to make my parents proud of me. I also want to open an academy to hone the skills of disabled children so that they can become winners,” Suvarna says.