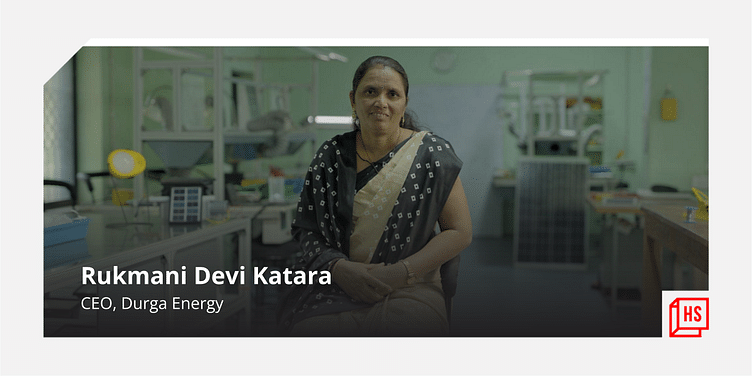 Rukmani Devi Katara, CEO of Durga Energy, studied only until the eighth standard and was married off at 13. Later, she went on to start a renewable energy revolution in Rajasthan.

Married at 13, Rukmani Devi Katara would have been confined to a life behind the ghunghat in Mandava village, Dungarpur district, Rajasthan.

Until she decided to take a leap of faith, that changed her life and of those around her. Rukmani now heads Durga Energy, a tribal women-owned solar manufacturing company.

Here is how a woman who studied only until the eighth standard rose above poverty and hardships to head a company that is igniting a renewable rural energy revolution in India.

Speaking on the sidelines of National Geographic’s One for Change event, Rukmani told HerStory:

“While we had some livestock, we had no money or food to eat. My husband was unemployed. It was the same with everyone in the village. Electricity was available only in the main hubs. We made do with kerosene lamps. Villagers were often bitten by scorpions and snakes. Children bore the brunt of it because they had no light to study.”

The first step toward change was when Rukmani was introduced to the Rajasthan State Rural Livelihood Mission or Rajeevika, which encouraged her to start a Self Help Group (SHG) in her village.

“Through Rajeevika and the funds provided, the members of the SHG were able to set up small ventures of their own. Some bought cows and buffaloes and I started a kirana shop in the village,” she explains.

However, it was the Dungarpur Initiative launched by IIT Bombay in 2016 that really turned around the lives of Rukmani and the women in the region. Headed by Professor Chetan Singh Solanki, Solar Saheli was launched as part of its SoUL project in conjunction with Rajeevika and the District Administration that organised four clusters from the SHGs in the region.

Women like Rukmani were trained in assembling and familiarising with solar panels. The presidents of the four clusters—from Antri, Biladi, Jhontri and Punali—then signed an MoU with IIT Bombay to start manufacturing solar panels and lamps. The entity was named Dungarpur Renewable Energy Technologies Private Limited (Durga Energy).

“The aim is to have women from the SHGs be part of the company. They are called Solar Sahelis. I started out as an employee, learning how to install panels. I went from house to house to set up those panels. I would climb tall ladders to install them at a height. I trained myself at every step of the process,” says Rukmani.

Soon, she was made a supervisor and within a year, became the CEO of Durga Energy.

“Initially, the villagers had many questions about solar energy. They wondered how it would generate electricity. We asked them to use it for a month, and that helped them decide to adopt it. So far, 40,000 solar study lamps have been distributed, five lakh solar panels have been installed, and one lakh torches and 50,000 lanterns were manufactured,” she says.

Other changes are also visible. Each Solar Saheli earns somewhere around Rs 8,000-16,000 a month. According to Rukmani, they are now more open and not afraid to speak up, unlike earlier when they let the men do all the talking.

Her vision for the company is to expand the team of women from 55 to over a thousand, and touch every part of the state, and eventually, the country.

Rukmani is part of the National Geographic Mission campaign One for Change, which showcases a series of short films that spotlight exceptional stories of change-makers who have taken extraordinary steps to make the world a better place.

She says she is honoured to be part of One for Change and hopes the story of the Solar Sahelis will now reach the entire world.

“Koshish karne walon ki kabhi haar nahin hoti (Those who try, do not fail),” she says, adding, “Mein ziddi hoon (I am stubborn). I have never failed.”