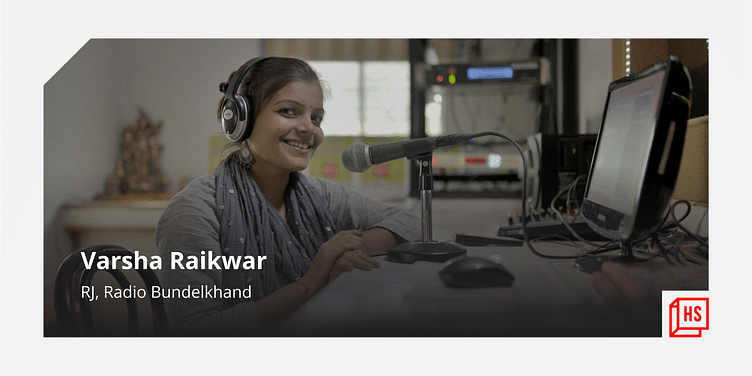 Over 2.5 lakh listeners from over 150 villages tune into Varsha Raikwar’s daily show Shubh Kal on Radio Bundelkhand to listen to her ruminations, advice, and first-hand reports on the effects of climate change, and what can be done at the ground level to leave a greener planet for our children.

From Orchha, a small town in the Bundelkhand region of Madhya Pradesh, 25-year-old Varsha Raikwar’s voice rings clear through the airwaves. Hers is the voice of reason, of awareness, and of change.

An RJ at Radio Bundelkhand, a community radio, Varsha started out as a climate activist, but her efforts have sparked a social movement. Over 2.5 lakh listeners from over 150 villages tune into her daily show - Shubh Kal - to listen to her ruminations, advice, and first-hand reports on the effects of climate change, and what can be done at the ground level to leave a better and greener planet for our children.

The only female RJ at Radio Bundelkhand, Varsha’s entry into radio happened quite by chance.

Speaking on the sidelines of National Geographic’s One for Change campaign, where Varsha has been featured as one of the changemakers, she tells HerStory, “Since I was a child, I loved the sound of my own voice. I would be singing all the time – while cooking and going about my daily chores. One day, after my grade VIII exams, I met a girl who said she was working at the radio station. That clinched it. I thought I would also work hard towards this goal.”

Hailing from a village that often bore the brunt of drought, Varsha was aware of the havoc wreaked by climate change.

“My father is a farmer, and I would see him disheartened when there would be no rain, and the crops would go without water. He would console himself saying it’s God’s will. I would wonder how this worked because we sowed the seeds, and put in all the hard work,” she says.

When she joined Radio Bundelkhand in 2017, her family was against her decision. She comes from a region where girls are married off after completing their basic education, and no woman from her family had stepped out of the house to work.

But Varsha was determined to be the change she wished to see.

After joining the radio, she started educating herself about environmental issues, so she could focus her show on climate change. She says her dream is to educate more people on climate, and impact them by changing their way of thinking.

“My approach is positive – I educate them on different ways by which they can make a difference in their lives and live sustainably – rainwater harvesting, organic farming, discarding plastic, planting a kitchen garden, and more. We also asked our listeners to let us know if they had done something new, and featured that on our show,” she says.

In fact, Shubh Kal inspired an entire village to switch to organic farming.

Varsha’s work also extends beyond the studio. She travels to neighbouring villages four times in a week and talks to villagers about their efforts. She’s thrilled they recognise her by her voice and call her ‘Didi’. Her work on the radio and off it has also sparked a social movement, inspiring young girls to pursue higher education and putting a stop to a social evil like child marriage.

“In a lot of villages, girls were married off by the age of 12-13. But now, things are changing. Villagers immediately call me if a child marriage is about to take place, so that I can reason with the family and stop it,” she adds.

Varsha agrees that it takes a woman to start a movement and sustain it.

“My awareness campaign now extends beyond climate change and includes women’s health. Women are now emboldened enough to talk of their problems and make sure they spread this awareness within their family and the society as well.”

With Varsha didi showing the way, many girls in the region want to follow in her footsteps. She has five women volunteers in her team assisting her in social change.

Varsha quotes the famous dialogue from the Bollywood film Om Shanti Om to drive home the point that if you do good, the universe will finally come around.

"Agar kisi cheez ko dil se chaaho to puri kayanat usey tumse milane ki koshish mein lag jaati hai. (If you aspire for something with all your heart, the universe will conspire in helping you achieve it.)

“Don’t worry about the challenges or the adverse comments thrown at you. Don’t stop yourself from dreaming big. There are a lot of things to be done – so that our children inherit a better planet from us,” she says.