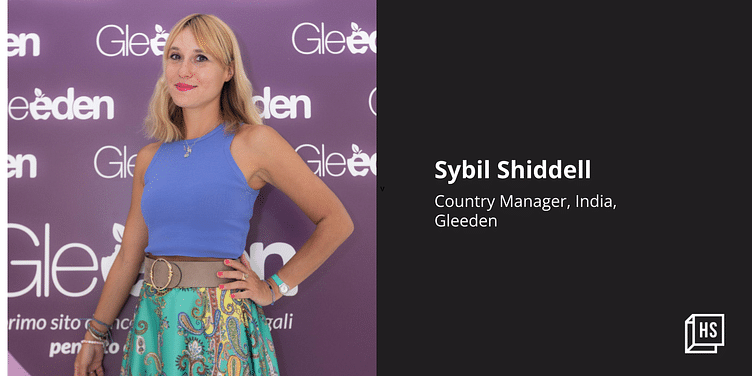 Gleeden has seen its user base increase by 112.5 percent since March 2020 in India. Originally developed in France, the app has seen 70 percent of its users come from Tier II and Tier III towns in the past year.

The homepage of Gleeden, an extra-marital dating platform and app, displays an attractive woman biting into an apple. And, before you register, the app asks you to take a bite.

With “extra-marital” as its pain-point, the suggestiveness of the image induces a chuckle. And despite its not-so-subtle “living in sin” connotation, the app boasts of having over 9 million users globally, and is present in several countries, including India.

Founded in 2009 by French brothers (whose identities are as discreet as the app claims to be!) Gleeden is run by a 20-member all-women team led by Soléne Paillet, Director of Communications; Silvia Rubies, Country Manager, Spain & LatAm; and Sybil Shiddell, Country Manager, Italy, UK, India, & Nordics.

Speaking to HerStory, Sybil Shiddell, Country Manager for India, says, “When we studied the Indian market, we found it unlike others, because of the specific cultural milieu unique to the country.”

When the app launched in India, the team noticed a lot of organic traffic and started paying attention. In 2018, when adultery was decriminalised, Sybil says, Gleeden saw a surge in users, though India is still considered a “traditional” society, where extra-marital affairs may be frowned on.

However, she has an interesting take on why the app is gaining popularity in India.

“Unlike in Europe, people marry young in India, and maybe after 10 years or so, start to go on a separate path, even if they are together. Of course, they keep staying together because of family reasons, or because divorce is expensive or separating may take a huge toll psychologically. They may also be judged from the family or society,” she says.

“There are some who look for adventure outside their relationship, and Gleeden offers these people what they need in a discrete and private environment, which is also safe,” she adds.

Interestingly, while Gleeden saw a lot of traction from metro cities like Delhi, Bengaluru, Kolkata, and Mumbai initially, the pandemic and the subsequent lockdowns moved the narrative to Tier II and III towns.

Adding to the interesting turn of events in 2020 and 2021, Gleeden has seen over 45 percent increase in subscribers looking for same-sex encounters through Gleeden. Overall, the percentage of married subscribers in the Indian community opting for ‘homosexual’ as their sexual preference is 5 percent (vs 12 percent of the global community).

According to Sybil, the past two years’ data has shown that 70 percent of its user base in India comes from these towns. They were mostly men and women looking to connect with others without wanting to meeting in person, and the app promised them a “discreet place” to indulge in extra-marital “adventures”.

“During the pandemic, online dating and virtual flirting became a forced substitute for real-life encounters, providing people a much-sought outlet to vent during the lockdown. Gleeden was no different: the way the app is built, and its state-of-the-art privacy setting, allowed people who were forced in 24/7 cohabitation with their partners and families to find some “me-time” to distress through virtual flings and friendships and go through the forced isolation more easily,” she says.

Not your traditional dating app

‘Discreet’ is the word Sybil uses often in the conversation to drive home the point that it’s a safe place for women. But what about men masquerading as women on the app?

For starters, the price point or subscription charge is a major deterrent. While the app is completely free for women, men need to pay anything between Rs 1,000 for 25 credits, Rs 3,000 for 100 credits and Rs 7,000 for 400 credits. Users can use credits to spend on the website for messages, start chats or send virtual gifts.

Apart from this, Sybil promises a moderation team that works 24x7 to make sure “there are real people behind it”.

“If, in the process of courtship, when a woman finds out she has been approached by another woman, whom she thought was a man, they can report the user. The moderation team, which received the latest extract from the conversation, is analysed and if the identity is fake, the member gets banned automatically. Every report is investigated and no pornographic or nude images are allowed. We don’t want women to be harassed on our platform,” Sybil explains. Too many complaints against a particular user also leads to their profiles being blacklisted.

Registering on Gleeden is easy. One has to decide a nickname as an identifier, and go about building a profile. A profile picture is not mandatory but an inspiring or creative picture (head, shoulders, eyes, mouth, etc.,) can take its place. People of any sexual orientation can join the app.

“Since this is an app for extra-marital encounters, you may not want suitors in your proximity; you may look for them in your closest town or elsewhere. You can find people you like through aesthetical or physical parameters and then start chatting. We are not a supermarket for dating,” Sybil says.

She believes there are people who are happy flirting “because they find it the best way of reaffirming that they are nice, hot, seductive, and more.”

“We have testimonies of people that actually fall in love, and eventually became a real couple because they had the courage to leave their old partners and pursued a new relationship on Gleeden. The important thing is you don’t have to pretend to be someone else, you can say you are married or in a relationship as this is not a place where people will judge you,” she adds.

A testimonial shared by the team from Butterfly27, a 38-year-old from Mumbai, speaks of finding a new spark in life after 17 years of marriage.

“After spending 17 long years with my husband, I eventually started to feel that I needed some more excitement and the adrenaline rush, which is why I thought of joining Gleeden. I absolutely love my family and didn’t want to change anything about it, but I think it was a period where I really wanted to meet someone and keep it absolutely private. Thanks to Gleeden, I met a very charming man and shared a relationship with him for over a year. Our memories together through weekends and many evenings were the most beautiful experiences. Although intimacy was a very important part of our relationship, this turned out to be like a real love story, which was totally unexpected.”

Sybil also points out that infidelity is a stigma everywhere in the world and not just in India.

“We have noticed this trend in Europe, where couples, who have been together for more than 25 years, are becoming polyamorous or are having open marriages. At this point, it’s no longer infidelity because both individuals are aware of what they are doing. Boredom and routine are what killed marriages—sexually and psychologically. We saw that introducing a third or fourth element in the marriage changes the dynamics,” she says.

Sybil’s plan is to expand the communication strategy for India, and as a definitive, adds, “if the country allows us to be bolder. It’s not easy like it’s in Europe.”