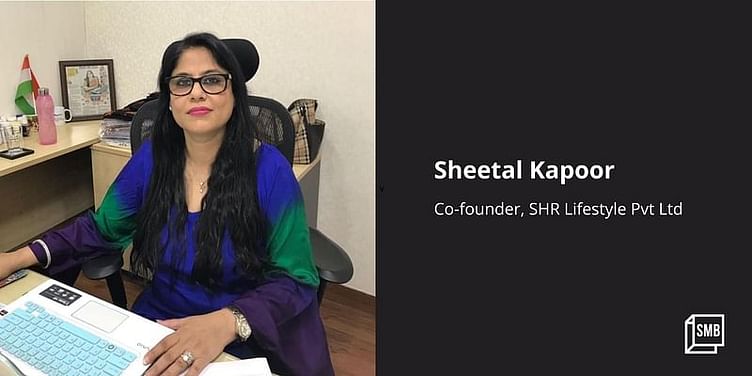 Started in 2010 by entrepreneur Sheetal Kapoor and her husband Sandeep, Delhi-based Shree is a global Indian ethnic wear brand, with over 100 stores across India and Dubai.

Sheetal Kapoor got married in her 20s and spent the next 20 years being a devoted homemaker. After selflessly discharging her duties towards her family, Sheetal felt she wanted to do something more in life. Though Sheetal didn’t have any business background, she had strong business acumen.

It was around the beginning of 2000 when India was opening up to the world of ecommerce, and the market for the ready-to-wear segment was seeing traction.

Sheetal and her husband Sandeep, who was into the business of producing garments for retailers, spotted a gap in the ethnic wear segment for Indian women and launched ﻿Shree﻿ in Delhi in 2010 under the parent company SHR Lifestyle Pvt Ltd.

And thus began Sheetal’s stint with entrepreneurship at the age of 40.

After seeing the rising demand for tailor-made everyday Indian ethnic wear, the couple decided to explore the foreign market.

Speaking to HerStory, she says, “Back in 2010, there were hardly any options for women in readymade everyday ethnic wear. And in India, the ready-to-wear market was still at its nascent stage. Sandeep had a good experience working as a garment OEM for Reliance, Future Group, etc., and so we decided to hit the international online space as there was a huge demand coming from that part of the world.”

However, Sheetal’s journey wasn’t easy. She says, “mere ko laptop chalana bhi nahi aata tha (I didn’t know how to work on a laptop).” But today, she and her husband have built a global brand with a turnover of Rs 40 crore, with more than 100 stores across India and Dubai, employing more than 350 people.

While the couple built their in-house brand, going direct to the brick-and-mortar stores was quite a risk as the readymade ethnic wear market was still in a nascent stage in the country, and online shopping was yet to open in India in 2010. Thus, to kickstart their journey, they listed their brand on eBay and started their overseas business.

The business toured quite well for the couple as they expanded Shree’s reach from the UK to the US, Europe, and many other countries in the next five years.

By this time, Shree had a good customer base, and the founders decided to bring the brand to the Indian audience and launched Shree’s first offline store in Delhi in 2015.

“It was a 250 sq ft store where I personally attended every customer. I understood their desires and demands and we tried to curate outfits according to their needs. You see, a woman's body type in India is very different from women in the US, the UK, or any other country. I worked with my team of designers in the initial days and Sandeep used to design himself, and this is how we garnered a lot of praises from our customers, Sheetal says.

One thing led to another, and within three years of operating in India, Sheetal and Sandeep had opened 10 stores, the majority of them in Delhi. In 2019, the company secured funding of Rs 80 crore from Mumbai-based private investment firm Alpha Capital.

Sheetal says, the Indian market was welcoming Shree with open arms and they shifted their focus on scaling up with the offline experience stores and started targeting India and Dubai.

According to Statista, the women’s ethnic wear market across India in the financial year 2020 was approximately $17 billion, and is estimated to cross $24 billion by 2025.

Highlighting the future prospects, Sheetal says that crossing the 100-store mark was a milestone, and gradually they are expanding its footprint not just in India, but in the offline retail space around the world, targeting 500 stores in the next three to four years.

The company, which competes with brands dominating the Indian ethnic wear market like Global Desi, W, Aurelia, Mustard, etc., says it is not looking to raise any funding in the near future.

Speaking about how Shree is standing out from the competition, Sheetal says, “we are not comparing ourselves to any other brand, but we are walking with them.”

“Every woman must know that no one can stop them from achieving their dreams. They just have to step up and be confident,” says Sheetal advising women entrepreneurs.