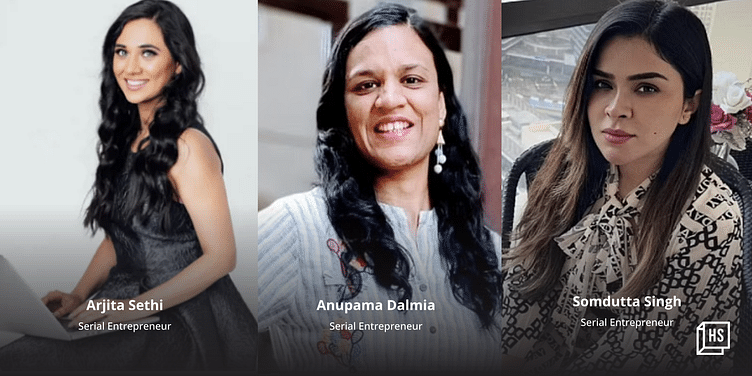 Meet four women who have translated ideas and concepts into successful businesses, becoming serial entrepreneurs in the process.

It’s often said that entrepreneurship is not for the faint of heart. There’s grit, determination, and fortitude involved to take on the multiple challenges that come with it.

For some, taking that risk once is an exhilarating feeling; for others, starting up many times means also making an impact in the domains they choose to be in.

Whether it’s ecommerce, nutraceuticals, or fashion, meet four women who are upping the game in the startup ecosystem as serial entrepreneurs.

Prior to this, the first-generation entrepreneur, who now divides her time between India, the US, and Dubai ran a few D2C private labels like Amplicall, The Real Boss Lady Beauty, Biotevia, and Irotica.

With these brands, she realised that selling online was not an easy task. Multiple nuances were attached to the process - understanding ranking, deciphering user data, analysing pricing and consumer behaviour, and listing automation. With Assidus, Somdutta’s aim is to focus on brand centricity and cross-border ecommerce.

Before Assiduus, the serial entrepreneur had launched several startups, including Unspun Group, an adtech firm in 2013 — her first startup.

Despite Anupama Dalmia’s extended family being extremely patriarchal in nature, her parents encouraged her to dream big and succeed on her own terms. After completing her engineering degree and MBA, she joined Infosys in 2006.

However, bitten by the entrepreneur bug, she decided to quit her job to pursue her passion for creativity. Anupama is the founder of three bootstrapped startups: Rhythms & Beats, Tingle Your Taste Buds, and Beyond the Box.

Anupama cashed in on her mother’s passion for cooking and started a small cookery page, Tingle Your Taste Buds, for her. When it began gaining popularity, she decided to turn it into a website in 2014. She also built a revenue model around it - earning from advertisements and collaborations. An original cookbook is also on its way.

Her third venture – and personal favourite - Beyond The Box was launched in 2019 and organises online and offline creative writing classes for children and adults.

During the dotcom boom, Pooja Goyal started an enterprise startup in the Bay Area, a company that shut down during the 2001 downturn.

While working with Adobe in 2007, Pooja decided to move back to India. However, she soon quit her job to start her second startup, Intellitots, which she built with a batchmate from IIT Delhi. After 10 years of bootstrapping and running Intellitots, the startup was acquired by KLAY.

Pooja joined her third startup, Avishkaar, in 2020. The edtech startup has developed a combination of hardware, software, curriculum, and communities to provide curated experiences to schools and children.

When she was just 16 years old, Arjita Sethi joined her mother, an entrepreneur who ran The School of English, a Delhi-based institute that gives students vocational training in communication, language, and technology skills.

She moved to the US to pursue her master’s in social entrepreneurship at Hult International Business School in 2014. There, she created Equally, an AR platform, with her husband Anshul Dhawan in San Francisco.

Equally already has 20,000+ users onboard and is present in 12 countries across the world.

In 2021, she started the New Founder School, an invite-only collective of value-driven, aspiring, and immigrant founders supporting one another in building their ideas in a sustainable way.