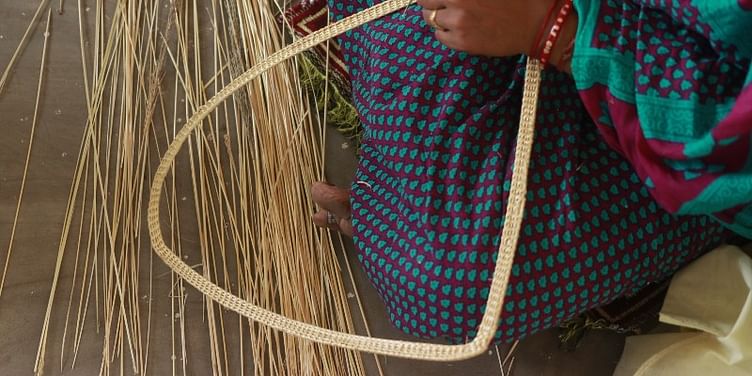 Payal Nath co-founded Kadam Haat and Kadam Foundation, an upskilling initiative for rural artisans. She is one among 75 women honoured as Women Transforming India by the NITI Aayog in 2022.

Kolkata-based Payal Nath, Co-founder of ﻿Kadam Haat﻿ and Kadam Foundation, is among 75 women honoured as Women Transforming India by NITI Aayog this year.

Payal grew up in different parts of India as an Army child and moved to Kolkata after marriage. Trained as a shoe designer, she couldn’t find a suitable job in the city and decided to start consulting in design. When she got an opportunity to work on a collection with Export Promotion Council of Handicrafts (EPCH), she realised she was earning more as a consultant than any artisan who worked with her.

“We chose basketry because we wanted to go into the remotest areas where nobody would work. In these regions, you find some of the poorest people with sub-par skill levels. They had never been known for basketry. When you start working with them, you realise there’s much more than just the product or design,” says Payal in a conversation with HerStory.

She says working with rural artisans and natural fibres helped her grow as a person. “I had worked with international designers, especially from South-east Asia, in the 90s, and with Italian designers as well. Marrying that knowledge with the indigenous ways to work on our Indian natural fibres has been an incredible journey.”

Alongside Kadam Haat, a handicrafts store, Payal also founded Kadam Foundation—an upskilling initiative for rural artisans. The two organisations work in tandem to upskill, create opportunities, and provide sustainable livelihoods to marginalised communities in rural India. Using 100% eco-friendly local materials like grass, and green technology, Kadam has been training people, 85% of them being women, and bringing livelihood opportunities directly to their homes.

Started in 2006, the organisation’s work was restricted to Bengal and Odisha for nearly 10 years. In 2016, the NGO was approached by HCL Foundation to create more clusters in Uttar Pradesh.

“Not many organisations were reaching out to these communities because of the remoteness of their existence. Their lack of scientific know-how on the subject added to negligence (in comparison to other Southeast Asian countries' command over these fibres, including handholding and policies that supported these crafts),” remarks Payal.

The partnership with HCL Foundation led Kadam Haat to work with Hardoi artisans engaged in Moonj craft. Moonj, a type of wild grass that grows near the banks of River Ganga, had always been used for personal consumption and wasn’t treated as a resource. The organisation trained artists in Sultanpur, Mathura, and Sitapur in cotton handloom weaving.

The income enhancement with Moonj grass basketry led to various other prestigious projects, such as working with World Bank and the Jammu and Kashmir government.

Between 2020-2022, the team was invited to work on Willow wicker craft in Ganderbal, J&K as part of the Jhelum Tawi Flood Relief Project.

A group of nearly 450 artisans worked on the wicker handicraft, traditionally known as ‘Shaakhsaazi,’ through a collective aptly named Shaaksaz, with independent artisan directors.

Payal says the idea was to mobilise, train, and create a producer collective who could run their own collective besides designing marketable products. In the first year of training alone, Kadam Haat fulfilled nearly Rs 20 lakh worth of orders and Payal recently represented the Shaaksaz group at the Las Vegas Market Show, US on invitation from Aid to Artisans. One of Shaaksaz’s products was even selected for the People's Choice award and showcased in the market snapshot, says Payal.

In 2020, Tata Realty reached out to the NGO to work with construction workers who had reverse migrated to Malda and Murshidabad regions in West Bengal. Kadam Haat also works in Bihar with Sikki grass and in Bengal with Sholapith—both easily replenishable natural fibres.

“Right now, we're working with nearly nine different fibres from around the country. What’s astonishing is that the bamboo in Bogura district is different from the bamboo in Midnapore or Malda. While some people were making jewellery with this bamboo, others were using it to transport betel leaves,” recalls Payal.

Currently working with about 462 artisans across all these crafts, Payal says the journey has been fulfilling in every way. “The culture bearers in these rural belts are a storehouse of love and traditions if we opened up to them. Their inherent knowledge of using just enough from nature to restore the balance and equilibrium is commendable,” she adds. Kadam Foundation the NGO, headed by Amitava Bose presently, has worked with nearly 8000 rural artisans so far.

This woman’s not-for-profit has helped over 10,000 artisans in 18 states

Kadam Haat has a new title - Kadam Haat Basketry Barn, imagined on the lines of Pottery Barn in the US.

“We want to create Basketry Barn for handmade fibre crafts of India, ensuring no disparity between using which kinds of grass, or which region it originates from; but showcasing indigenous knowledge and pride. If we can represent this from India collectively, it will provide some standing to nearly 10 million artisans, many of whom are not even recorded anywhere in the census,” says Payal.

Also in the pipeline is a UNESCO project and working with the West Bengal Khadi and Village Industries Board (WBKVIB) on natural fibres. The project is slated to start this month with 1,500 artisans.

“We have hundreds of fibres that are easily replenishable grasses. Imagine these being under one roof, providing artisans with a voice and livelihood, and ensuring sustainability,” concludes Payal.