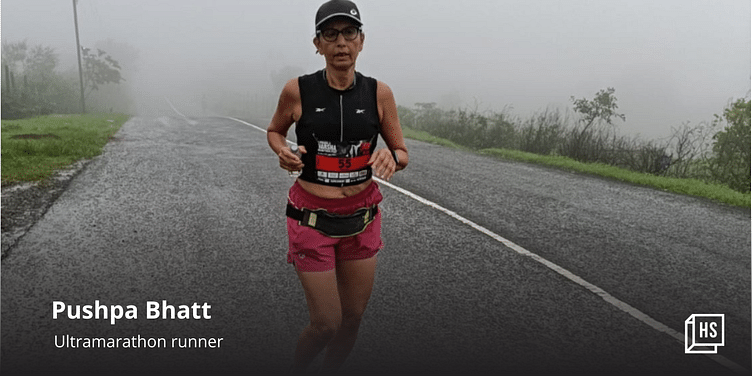 An ultramarathon runner, 66-year-old Pushpa Bhatt will be attempting the world’s highest ultramarathon, the Khardung La Challenge, for the second time, on September 9.

Three years ago, when Pushpa Bhatt was 63 years old, she ran the world’s highest ultramarathon, the Khardung La Challenge, across a 72-km stretch, 17,852 feet above sea level.

However, as luck would have it, she missed the cut-off by four minutes, even though she had finished the first three stretches well in time. A miscalculation in the countdown mainly led to her losing out in the final stretch.

“I was in shock, my daughter and everybody else around me was crying. I think we are raised to brush our feelings under the carpet, not emote, or show any kind of vulnerability. I was very upset but I just couldn’t express it,” Pushpa tells HerStory from Jispa, 10,000 feet above sea level, where she has been training for the 2022 Ladakh ultramarathon set to take place on September 9.

Training of the mind

Training at high altitudes is not easy. The night before we spoke, Pushpa had checked into a hotel in Jispa, which was located right on the highway, and the sounds of moving traffic disturbed her sleep. It’s here, she emphasises, where training of the mind becomes crucial.

“Today we walked from Jispa to Darcha in the hot sun. I was thinking—what am I doing, I can always take it easy. These kinds of thoughts are always crossing the mind. Also, the elevation changed from 6,000 feet at Solang Valley to 10,000 feet plus at Jispa. Walking is very hard, but you have to learn to discipline your mind because it’s always trying to tell you to quit. You have to show your mind who’s the boss,” says Pushpa.

Along with a strong will, Pushpa adheres to a strict diet. She practises clean eating most of the time, cuts out carbohydrates, and gets her nutrition from chicken, eggs, lentils, fruits and vegetables, yogurt and protein supplements, unless it is before an event when she eats complex carbs.

Pushpa’s life has been one in which challenges dogged her at every step. Born and raised in Mumbai, her father died when she was 12. She started working when she was 17 years old and paid for her own education. She has a BA from Elphinstone College and an MBA from Narsee Monjee Institute of Management Studies. She started her career as a secretary in Goodlass Nerolac Paints. After 13 years in the organisation, she moved to Lupin Labs for a couple of years and then joined the shipping company Maersk to head the compensation and benefits portfolio.

“I resigned from Maersk when I was 50 years old to become an entrepreneur. I used to swim at the time and had contracted jaundice but wasn’t aware I had it, and I thought my stressful job was affecting my career and health. I had been working since I was 17 years old and wanted to do something different,” she says.

Pushpa invested in the franchise of a L'Oréal salon in Malad and also took up HR assignments as a consultant.

Not content with being an entrepreneur, she did a course at the American College of Sports Nutrition to become a qualified nutritionist at the ripe old age of 65, when she had free time during the pandemic. She also travels extensively and writes poetry. Her first attempt in the Ladakh marathon is featured in an anthology, Runner’s Tribe.

Pushing the limits: Meet the first woman to run 480 km from Manali to Leh in 156 hours

The quest for Khardung La

Pushpa took up running at the age of 47.

When her colleagues were planning to participate in the Standard Chartered Mumbai Marathon, Pushpa too decided to give it a try. They were talking about training for 10 km or 15 km every day and Pushpa felt she couldn’t run even for 15 minutes.

She discovered running was hard but persisted and took it seriously. From 2014 onwards, she has run eight ultramarathons and 11 full marathons, including the TATA Mumbai Marathon, Satara Marathon, and Thane Marathon, and has completed the Ladakh Marathon.

Pushpa also ran the New York Marathon in 2018 where she clocked a personal best of 4 hours 58 minutes, in spite of all the elevations, the bridges, and the huge crowds. She also completed the Berlin Marathon in September 2019.

The quest for the Khardung La Challenge took root in her mind when she visited the place as a tourist in 2013.

She recalls, “I saw lots of people cycling there and I was on the top of Khardung La and struggling to breathe. That stayed with me, and when I ran the Ladakh Marathon, I was in the Leh market one Friday and witnessed many people finishing the run. I was amazed–72 km on such rough terrain. Since I qualified, I thought why not go ahead.”

Pushpa ran on hills, with a bike pilot following her in thick fog, amidst poor visibility and slippery puddles. She ran up and down slopes for two-, three-, five-, and finally, six-and-a-half hours. She ran during the night for 60 km in Lonavala, preparing for the big challenge.

“As we grow old, we lose muscles; when you run a lot, you need to have good stamina and muscles, your back, core, knees, hamstrings. When I was diagnosed with an arthritic knee, I used to run on the sand, on Aksa beach in Marve for two-three hours, and slowly strengthened my knee. Pilates has also benefitted me a lot,” she says.

Come September 9 and Pushpa hopes to close what she calls “unfinished business”.

She takes us through the long, arduous, and almost torturous stretch that involves only 30 % running, and the rest of the time, one has to walk.

“There is 50% less oxygen and you run, you are panting, some of the stretches will take you 20 minutes to run a kilometre. At that terrain and elevation, you are not able to run but you think you have done 32 km and reached the top and now by 48 km you are again tired. When you are running down, it hurts your shins, making it hard on your knees.

“It's a very tough marathon, and young people try to push themselves and find themselves out of breath and are then out of the race. The cut-offs are at 8, 10.5, 12 and 14 hours. When you are going down, it hurts your shins. Yes, it's very hard on your knees.”

While it’s easy to say 'age is just a number,' at some point in time, the body doesn’t listen to you. What has been her experience in this regard?

Pushpa agrees. “Just before I came to Jispa, I ran the Neral elevation near Matheran, where 7 kilometres is about 700 metres—a very tough elevation. I did 50 km there; and, during the last eight kilometres, my shins were hurting, but after a point, it stopped. You don’t listen to your body sometimes. There are always aches and pains. If you learn to ignore that, it gives positive results.”

She also banks on a circle of friends, who have her back at all times, and her daughter who is her biggest cheerleader.

“I wake up around 5 am, run for an hour, do yoga, go to the gym, listen to a podcast, cook, and leave for office. In the evening, I read and watch the sunset on my terrace. I talk to my daughter and my sisters and am in bed by 9.30 pm. On Sundays, I do long runs with a group and also meet for breakfast,” she says.

What’s her take on life? Pushpa believes in living life with discipline and to the fullest. And there are many more heights to reach and records to break for her.

(The story has been updated with additional information on different marathons and timings.)