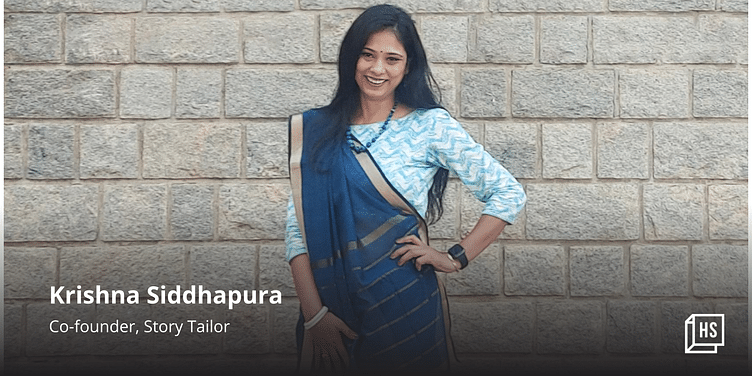 Story Tailor, a venture by Krishna and Bhautik Siddhapura, offers handprinted clothes for children featuring designs of stories from the Panchatantra.

It’s interesting how living in a joint family and hearing traditional folktales passed down through generations can generate a startup idea.

And, that’s precisely how Krishna Siddhapura and her artist husband Bhautik started Story Tailor, a comfortable, eco-friendly clothing brand for children, hand-printed with designs inspired by stories of the Panchatantra.

Krishna Siddhapura, who hails from Ahmedabad, joined Ingersoll Rand in 2008, after completing her engineering in instrumentation and controls.

After she got married in 2014, she moved to Mumbai and decided to take a break when she became pregnant. Bhautik runs his own advertising firm, MomMadeCo.

“When my son Dev was born, I didn’t want to go back to a corporate job that would take 12-13 hours of my time every day. I wanted to be there for every milestone,” she tells HerStory.

While shopping for Dev, she found kids’ clothes were highly influenced by Western designs and characters like Spiderman, Superman, and other cartoons. There were very few Indian brands, and they too had very conventional designs and prints.

“Both Bhautik and I were raised in joint families. While I was growing up, I lived with my parents, grandparents, my uncle, aunt, and their two children. We had our meals together, and would sit after dinner and listen to stories from our grandparents, simple stories with morals,” she says.

For Bhautik too, it was the same, and when Krishna moved to Mumbai after her wedding, she lived with her in-laws, which included her mother and father-in-law, brother-in-law’s family, and a great-grandmother-in-law who was 98 years old.

“My great grandmother-in-law is a treasure trove of stories—from partition to their association with the royal family—she shared small stories with all of us, especially our children,” says Krishna.

With two children in the family, hers and her brother-in-law’s, the mothers enjoyed dressing up their children in traditional clothes for family functions and festivals. Her mother-in-law designed and sewed them.

Clothes with a tale

With friends and family asking them where they could get similar clothes, the couple struck upon the idea of designing clothes for young children. Bhautik, a graphic designer, came up with a “story” print–it was the story of the hare and the tortoise.

When Dev was two-and-a-half years old, the couple decided to leave the fast pace of Mumbai and settle in Vadodara to pursue their startup dream.

“We started our research into different designs. He developed a few prints with a negative-positive design. For example, the hare and the tortoise is in the positive space and the fox in the negative space. He plays the role of the umpire,” she explains.

They first explored the idea of block printing, but the intricate designs meant screen designs would be a better idea.

Every dress/outfit comes with a flip book in which the story is written and illustrated, which can be used for colouring.

Story Tailor was launched in 2021. Its target audience is children between 0-8 years old and offers both comfort and festive wear for boys and girls. She claims their idea is unique

Krishna says the products are unique in the market and is planning to patent Story Tailor’s prints. The clothes are available on their own website, First Cry, Nestery, and Myntra. All clothes are produced in-house, including designing, printing, and sewing. Prices start from Rs 999.

“We have 23% repeat customers online. We have a physical studio in Vadodara that is receiving a lot of traction. We are receiving requests to incorporate more designs. We also participate in pop-ups and exhibitions to popularise our products,” says Krishna.

The couple has invested Rs 13 lakh in the venture and has applied for incubation at IIM-B’s NSRCEL programme.

Krishna has an exciting roadmap for the future.

“We are planning to introduce other natural fabrics like hosiery cotton and raw silk for traditional looks. We are also excited about launching a line for grandparents–who are the original storytellers, co-ordinated clothes with their grandchildren. But their clothes will be more functional, with comfortable fabric and pockets–all with story prints. We are also looking at stories printed on sarees,” she says.

They also plan to launch traditional toys with a story-telling element, a physical space to introduce “nostalgia” games to children and adults, and organise story-telling sessions as well.

Meet Sakshi Bakshi, who is bringing healthy and tasty meals to your doorstep