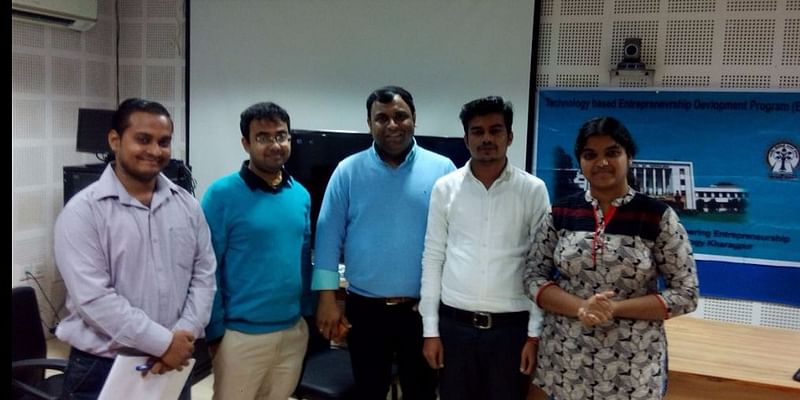 “Have you ever thought about those People who are Refugees ?”. What happens when we were in that position? “How we live, what we eat, where we go?” If you never think about these Problems then please start thinking little bit about those people as being a human. There are millions of innocent people, who are still in the prison for the last two decades and no one cares about them except some refugee accepting places.

Today, I(Ranjan) Founder of PlaNt Eco Circle request you to think about it because someone has realized me that we need to think about them because we are human being. As I am emerging as an entrepreneur, I only think about money and the real problem which really exists beside me. Most of Entrepreneurs do the same thing. But, On December 10th, 2016 when I went to attend the Classes of National Start up launch pad at IIT Kharagpur, I met a girl who is real entrepreneur due to her unique and different idea & Concept. No one dares to think about the concept except her as an entrepreneur. She is single their and having no team till date. I am writing this blog only to help her to find a team for her across the world. So, let me Introduce to this brave heart girl.

Her name is Shubhechya Sarkar, 3rd year, Chemical Engineering student at Jadavpur University. But she is more involved in talking about policies, ideologies, international relations, philosophy etc than engineering. She is introverted but she considers herself a good debater. She has a lot of hobbies, and she keeps adding new ones to the pile.

I asked some questions to her and got really surprising answers. I am writing all the answers provided by her following.

Q1) How do feel after selection at NSL as only a single girl across the country in top 10?

Answer: – “At first I did feel a little overwhelmed. But then, I’m used to being the only girl in a lot of places exclusively dominated by boys, so it’s not a big deal. It’s actually very empowering, instead of feeling intimidating. I think what really was intimidating was being selected in the first place. That means that the selection team, that is the Kolkata Ventures, saw something in me and my idea and believes that I can do something with it.”

Q2) Please tell us about your Idea and Concept.

Answer: – “My start up is called Compass. It’s a service aimed at young refugees to solve their problems of misleading information and loss/theft of documentation. The idea behind my start up was about using a refugee’s knowledge of survival to help another refugee survive. I wanted to create something that would clash most minimally with the host government policies and yet help those who have been displaced by war and natural disasters.

Q3) When and how you have started to think on this idea?

Answer: – It started with the Hult Prize competition at our university in November 2016. The 2017 theme was ‘Restoring the rights and dignities of 10 million refugees by 2022’. And the idea progressed from an Aljazeera article that I was reading, about how to make a Syrian refugee employable to prospective employers in Germany. From there, I thought whether we could do something that would make a refugee’s prospects better when it came to employment. From there on wards, I traced their journey back and back till I arrived at my present solution.

Q4) Why are so eager to help them?

Answer: – Historically, a country that has integrated refugees successfully often survives recessions (like Lebanon during 2008 global recession) and economic slowdown. Most economists and governments know it, but unless they see the success, they won’t act on it. I won’t say that it’s my sympathy for the refugees that entirely drive my desire to help them. I’ve always been of the opinion that logical decisions, no matter how hard it is, must be taken without much concern for public opinion. Because, in this digital age, public opinion is easily moldable and fickle. And in this case, where a refugee is coming into a host nation, someone who has skills and is employable, and the government lets these skilled people rot away in the corner by citing public opinion as the reason, this is the height of illogicality. If the government cannot innovate to integrate freely available skill for development, then entrepreneurs and the private sector must.

Q5) You are single without a team, how you will manage it?

Answer: – That’s my top priority right now. Getting a good outreach team since I’m too introverted to spread the word, getting a techie so that we can make out how technologically viable this project really is, and of course, a sound finance guy who can keep me on track and not let me make too many rash decisions that can jeopardize this start up financially. I have an abstract idea of the effort that will go into this, and I know I cannot do all the work without a team.

Q6) How deeply you have research on it? Please tell us some detail about real research.

Answer: – Before this, I used to participate in a lot of Model United Nations conferences. It’s a simulation of the UN where there are country policy debates. That’s where I got to learn a bit about the legalities, and the policies of various governments regarding mass migration. The real research began when I started working on my start up: reading through their stories, about what are the challenges that these people face when they settle down into a host nation, reports by the UN Refugee Agency. I try to reach out to as many sources as possible to be able to visualize what it feels like, being in the field. I’ve even spoken to a couple of Syrian refugees over Facebook, one in Germany and another in Greece, asking them about their day and their lives etc., so that I can get a better idea.

Q7) How you will succeed in this if u are from different study background?

Answer: – I don’t think it would’ve made a difference. I’ve thought long about it, what it would’ve been like if I were an arts or a law student. I think it’s great that I’m doing engineering. I get to be in touch with technology as well as the humanities, so I can strike a balance. If I were in arts, perhaps I would have gravitated towards engineering, so who knows?

Q8) How will NSL helped You?

Answer: – It has helped me a lot already. Being with so many budding and established entrepreneurs, being awed every time one of the more experienced guys shares something, it’s been a great two weeks till now. The sessions are very exhaustive and informative and inspiring. And it’s been a complete change of mindset. The more I learn, the more it feels like what I want to do is possible. I hope this continues even after NSL is over.

Q9) Can u tell me something more about Mr. Avelo Roy and other Participant, how they are helpful to u?

Answer: – A big part of the NSL, apart from the training content itself, is the participants and the mentors, that is, Mr. Avelo Roy, Mr. Neeraj Krishna and Prof. Prabha Bhola. Till now, I’ve interacted most with Mr. Roy, and he is really inspiring. The way he looks at business is very different from what I’ve always thought businessmen look at traditionally. He’s been on both sides of the spectrum, starting out as well as a well-established investor. And the other participants have made this really great and special for me, once even cheering me up when I felt a bit down with my research. I’ve even got a lot of suggestions for my start up from a couple of other entrepreneurs that I’m definitely going to apply. Also, since my start up requires a lot of contacts with aid workers and refugee support groups, some of my classmates have immensely helped me in that regard.

This is general interaction with Shubhechya who really doing something great and different in the field of Entrepreneurship.

Apart from the above interaction, I had a talk with some other members and mentors of NSL, IIT Kharagpur. Their views about Shubhechya Sarkar and her efforts towards refugees are as following:

“An entrepreneurial venture by a brilliant female entrepreneur to serve our fellow humans suffering in the refugee crisis. Shubhechya is poised to make a difference and we are all here to support her.”

“Human Suffering is always an inspiration for an entrepreneurial Journey. Refugee Crisis is one such issue that led Shubhechya to start a difficult Journey to minimize their suffering and support them for their uncertain future.”

“To address a problem like this requires a person with a big heart. It's really inspiring to see Shubechya striving in that direction to make a difference in this world.”

“Happy to meet a brave Soul, talented and enthusiastic female entrepreneur, who think about the solution to the problem of situations and difficulties of a refugee. Her idea is appreciative. We are always here to help and support her. We shall feel proud to be a part of supporting her venture “COMPASS”.

She needs help in creating a network and a team to make her efforts forward and to help refugees as much as possible. She needs some innovative minds as well as funding support from a venture capitalist to make it possible and make it happened on the real ground. The concept behind sharing this story is to help her in creation of an enthusiastic team for her venture “COMPASS”.

Any Body who is interested and wishes to help her any way can approach on this email id: shbhchsrkr832@gmail.com