Past, Present & Future of Freelancing: Some Shocking Facts 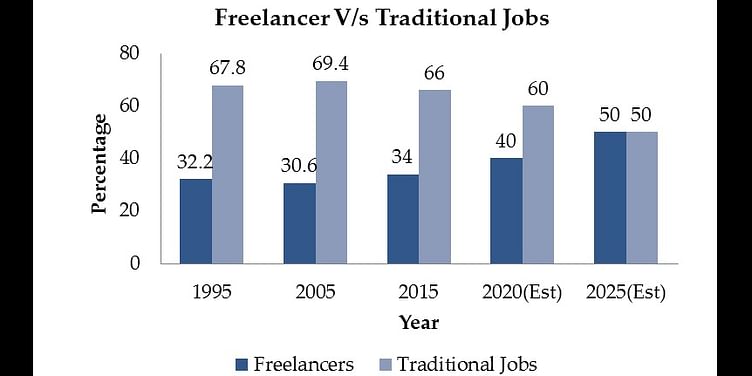 Times are changing and so is the scope of freelance jobs online. With so many online freelancing sites establishing coupled with several supporting reasons, the future of freelancing looks not just bright but brighter.

In this digital age, our thinking pattern has changed immensely. Be it the changing online user behavior to the prevalence of startups by young entrepreneurs. Under the influence of such digital evolution, one of the unexpected things has occurred. Yes, you’ve guessed it right! It’s freelancing that we are talking about. Before we throw light on some shocking facts about the future of freelancing, let’s take a quick glance on the history of freelance industry.

A page from the history

During the past, what the word ‘freelancing’ meant for us was a source to earn extra income over full time jobs. In fact, freelancing was considered ideal for students to earn their pocket money and an ideal time to utilize and earn some bucks for house-wives. As per the report of the US Government Accountability Office (GOA) in the year 1995, there were 32.2% of freelancers across the United States out of which a majority portion was formed by daily wage workers. This figure remained almost the same after 1995; however, it dropped to 30.6% in the year 2005, which reflected the fact that people were not considering freelancing as their prime choice.

As compared to the past, the present scenario has been very encouraging for aspiring freelancers. In July 2015, an independent research firm Edelman Berland, carried out a survey, where the results were as follows:

• About 53.7 million Americans are working as freelancers, which makes 34% of the total workforce.

• A population of around 60% of Americans freelancers now earns more than what they used to when they were in their traditional jobs.

• When asked about job satisfaction, 50% of freelancers said that they would not like to switch back to their traditional jobs, even if they are paid more.

• 83% believed that their freelancing career has good scope for growth.

• 60% of freelancers said that they switched from traditional job to freelancer at their own will, rather than a necessity. 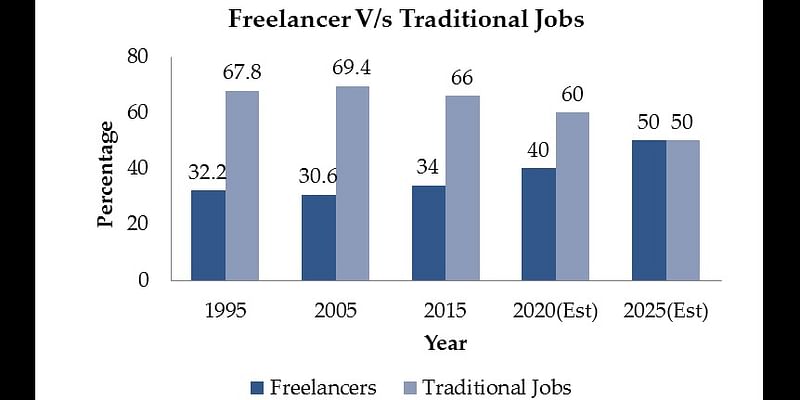 The above figures are a clear cut reflection that the Freelancing Industry has grown manifolds. According to a report released by Intuit, by 2020 around 40% Americans will switch to freelancing. Keeping in mind this impressive growth of this industry, it is being expected that freelance jobs online will outnumber traditional job seekers in the near future.

Not to be surprised, the growth of the freelancing industry has been more in developing nations like India, Bangladesh, Pakistan and Philippines. The prime reason for this growth is low pay scale for regular jobs in these countries. In fact, a large proportion of people, who started off as a freelancer, have now established their own firms by hiring local people. Besides this reason, the outstanding digitization in these countries has equipped people with virtual power.

Keeping the outstanding growth of this industry in the past and the impressive present scenario in mind, the future of freelancing seems bright with the growing numbers acting as indicators. In the predicted growth, developing nations are expected to lead. The increasing unemployment problem in developing nations and the gap in the pay scale between developed and developing countries are the prime reasons why freelancing is going to be the next big thing. Adding the icing to the cake are the various online service market places that has already turned out to be a great platform to earn extra income for freelancers across the globe.