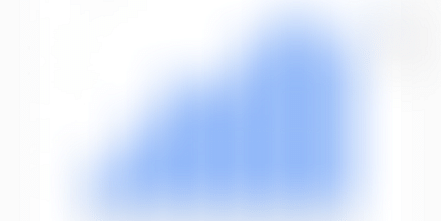 Manish Chawla is a 27-year-old management consultant whose credit score sucks. Despite being quite well compensated, his low credit score is primarily because of a small loan he took 4-5 years back in his college days and promptly forgot to pay it back. By the time he remembered that he had a loan to pay back, he had defaulted on it. He hasn't taken a loan since then and though he did repay that loan in full, he still hasn't qualified for a credit card.

Avinash Tripathi is a 22-year-old software engineer working at one of the top IT firms in India. He graduated from one of the top colleges in the country and earns a monthly salary that allows him to live quite comfortably and save some by the end of the month. He however has been denied a INR 25,000 loan to take a laptop from a few banks since he doesn't have a credit card nor a relevant credit history.

The above examples are just few incidents which are a testament to the pattern which has emerged over the past few years; Banking has witnessed a spike in bad loans and non- performing assets which has forced the lenders, especially the nationalized banks, to become a lot more vigilant and wary than they were earlier.

Let's address the elephant in the room: Indian Banking has traditionally been corporate focused. 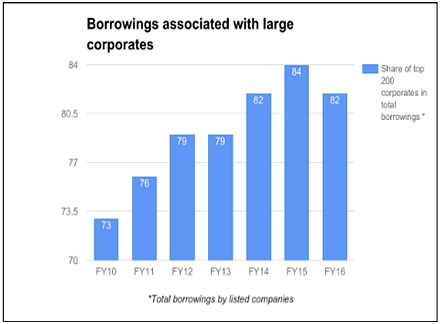 Indian banking is highly skewed towards the corporate sector with around 54% of the loans going towards them. Further analysis highlights that there is concentration towards larger borrowers with the top 200 corporates accounting for >80% of total corporate borrowings (including from non-bank sources). Courtesy this, most borrowers in the consumer and SME segment hence have to rely on the informal system where the rate of interest can be as high as 24-60%. This is despite the fact that SMEs contribute 45% to the national GDP as compared to 15% contributed by the corporate sector. 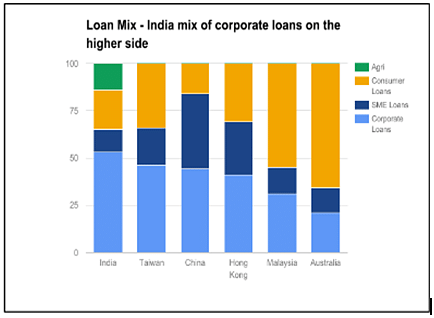 We can't blame the banks entirely though. Low credit penetration (both individual and SME) and, in particular, low unsecured credit is primarily because of Indian citizens being 'thin-file' or 'no-file' customers from the point of view of these lenders. However it is only now that we are starting to see how access to multiple digital streams are solving the conventional problem of being a data poor country. Overlaying data from hundreds of sources into data mosaics can help lenders form precise customer profiles which would have allow customized product delivery on a mass scale—making these segments more profitable than ever before—while at the same time bringing benefits of modern finance to these sections. 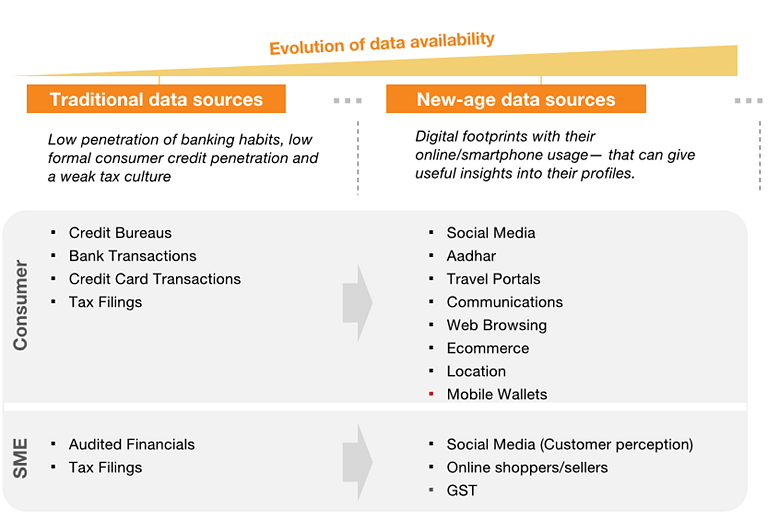 This influx of new data will change the tide towards retail loans. Growth projections are bullish and retail loans are expected to increase ~5X over the next 10 years i.e from around USD 620 bn to USD 3020 bn. Large financing opportunity in SME segment too; IFC has put the financing gap for the SME sector in India at ~INR 21 tn compared to the total SME loan book size of ~INR 7 tn. The share of corporate loans too is expected to fall from ~50% in FY16 to ~38% in FY26. This massive space leads to a bag of opportunities for players who can come up with alternative models for lending which can cater to the growing demand.

How do we define alternative lending today?

Alternative lending is a broad term used to describe the wide range of loan options available to consumers and business owners outside of a traditional bank loan.

Very briefly, existing alternative lenders have evolved into the following broad segments as of now:-

● Personal Loans: For short time duration and one- time purchases.

● Business Loans: Given to online sellers and small merchants.

● PayDay Loans: Small sums advanced to professionals and to be recovered when they receive their salary.

● Student Loans: For higher education and without collateral.

● P2P Lending: For individuals to borrow or lend money without an intermediary financial institution.

● Purchase Lending: To make a purchase of goods or services and specifically targets the student community.

"There are hundreds of startups with a lot of brains and money working on various alternatives to traditional banking. The ones you read about most are in the lending business, whereby the firms can lend to individuals and small businesses very quickly and — these entities believe — effectively by using Big Data to enhance credit underwriting."

The above is an excerpt from Jamie Dimon's, President & CEO of JP Morgan Chase, 2014 annual letter to shareholders. When the CEO of one of the biggest banks in the world makes a statement like this it does make a compelling case for alternative lending startups. 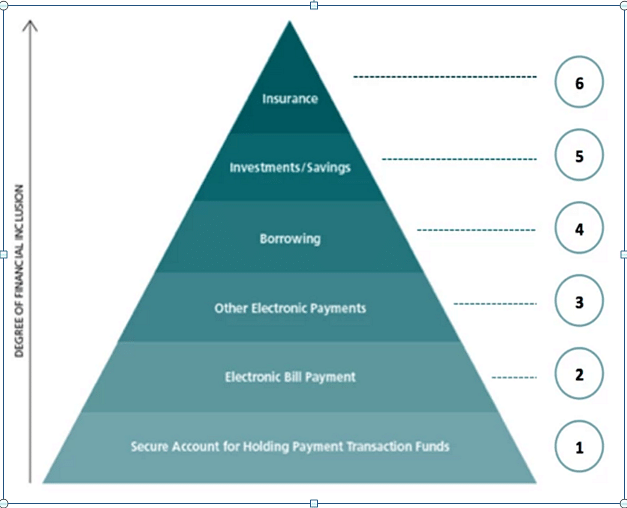 Also, alternative lending is the next step to reach towards our goal of financial inclusion for all. The first step in our goal of reaching financial inclusion for all was to help consumers and small merchants come online by providing payment options for transactions and then extend it to e-commerce. The next step is providing working capital which will require more and more alternative lending models to cater to the audience.

Alternative Lending posturing in the Indian market too 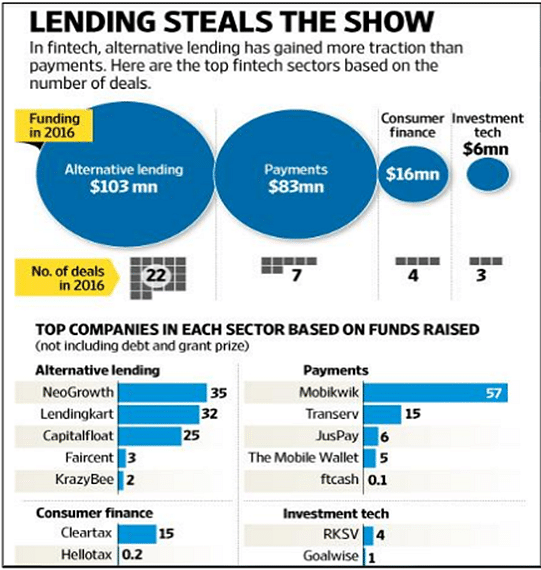 Alternative lending deals overshadowed those in the Payments sector

Alternative lending received the highest attention within fintech last year. It received USD 103 mn of funding across 22 deals. NeoGrowth, LendingKart and Capital Float, all SME Financing players, raised massive rounds from the likes of SAIF Partners, Aspada Partners, Omidyar Network among others which showed that Indian investors are siding a lot towards SME loans for now.

Indian payment startups too have joined the bandwagon and have started facilitating alternative lending. A few examples are:-

1. Mobikwik has started offering personal loans of up to INR 50,000 per individual in partnership with NBFCs.

3. Instamojo will begin offering loans to 0.125 mn merchants on its platform this year.

4. Snapbizz started a pilot with a financial firm to lend working capital loans to neighbourhood stores it has partnered with.

Like any other journey this one too has its obstacles for the startups. Some of them are:-

● With banks and NBFCs also venturing in the space, it would be critical for alternative lending platforms to ramp up their operations and create a sense of trust among borrowers.

● A strong credit underwriting algorithm will act as the key for the platform’s growth.

● Platforms will have to use a lot more data points as concerns are already being raised about the technology-driven underwriting for unsecured loans in times when the unemployment rates could rise and credit may deteriorate.

● For startups keen on lending, the major issue is sourcing funds. If the platforms are registered as NBFCs, the minimum cost at which they can source funds is about 15%. This would force them to lend at high interest rates, which is why startups prefer partnering with banks as they can offer cheaper interest rates to customers with good credit scores. Tax rate must also be lowered; doing so will stimulate the country's consumption rate, subsequently increasing revenue generation through indirect taxes.

● Additionally, it must compile data to create a track record of working professionals and business entities and use it to enable easy access to funds.

The future of alternative lending sure does look bright but the players will have to keep a check at which such credit lines and loans are being extended so that bad loans don't pile up. They must not be too tempted to get those growth numbers but not for the sake of loans getting defaulted. There is inherent risk in these loans and it is only when these startups keep their NPA percentage way lower than what a conventional bank has that they will truly start getting considerable widespread traction. The next 1-2 years should tell whether the players can evolve their models right to fight off this problem.