Freedom from hunger: Does India need a second Green Revolution?

Till the 1970s, India imported food and depended on foreign donors. Famines were common. Lack of development and modern technology, faulty food distribution, and other factors led to a big chunk of population going hungry and unable to feed. Malnutrition and starvation were the biggest problems facing the country. Food grains had to be imported as traditional agricultural practices, with low productivity, were unable to sustain a growing population. There was strain on foreign exchange reserves.

From food importer to self-sufficiency: Great strides for India

India was an importer of food grains. Due to traditional agricultural practices, low productivity, and a growing population, food grains had to be imported. That drained the already scarce foreign reserves. Green Revolution was initiated with help from US-based Rockefeller Foundation. It's cornerstone was new seed varieties developed in Mexico and the Philippines. Of the HYVs, wheat returned the best results. Area under HYV, which was 1.9 million hectares in 1960, jumped spectacularly to about 15.4 million by 1970, 43.1 million by 1980 and 63.9 million by 1990.

The Green Revolution proved beneficial particularly for Third World Countries that were developing at that time. Most of them were gaining independence during those times—India being one of them. The Revolution lead to adoption of new agriculture technology like HYVs, irrigation facilities, fertilizers, and novel modes of cultivation like mechanization of farmlands involving use of heavy machinery like tractors. The new practices superseded the previous traditional ones.

USAID official first to use the term “Green Revolution”

The phrase "Green Revolution" was used for the first time in 1968 by the US Agency for International Development (USAID) director William Gaud.

Traditional agriculture were not sufficient to feed growing population

Due to the increased production from the Green Revolution, the Indian government was able to maintain buffer stock of food grains. The Revolution enabled developing countries such as India overcome poor agricultural productivity. The new agricultural movement gained momentum particularly in the northern states of India, including Punjab, Haryana, and Uttar Pradesh.

However, problems of hunger and starvation continue to afflict the country. The increase in agricultural output in the 1980s and 1990s failed to keep pace with the fast growing population. A big part of the Indian population continues to suffer from hunger. On Global Hunger Index, India stands at 97th position. According to a report by International Food Policy Research Institute (IFPRI), one-sixth of population is undernourished; 190 million go hungry daily. About 30% children below 5 years of age are underweight. India accounts for 30% of neo-natal deaths internationally, linked to malnutrition. Perhaps, it is time for a second Green Revolution and remembering the invaluable contribution of Norman Borlaugh as India celebrates its 70th Independence Day.

The article was first published on CXOToday.Com by the same author. 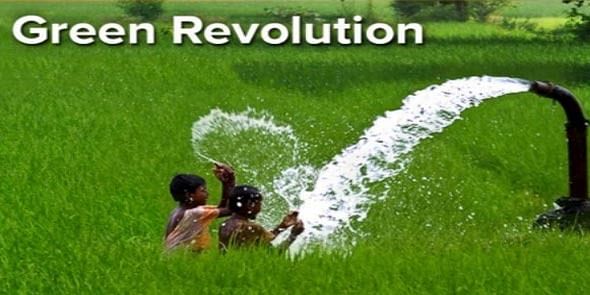