"In the last 12 months that I spent in a grassroots organization in Bihar, I started an initiative to teach children of villages of Siwan district more about the internet and the English language. I have documented here the process, the challenges and the success of my work." Anjali Nabiyal, India Fellow 2016 Cohort (worked in Parivartan, Bihar) It has been 12 months since I came to work in Bihar through the India Fellow program, and I would like to tell everyone about my journey of working with children on digital literacy. Here it is:

The Beginning: I had joined my host organization Parivartan with little idea of what I was to do in this year. I knew well why I had come, my intention to understand the sector better were clear. Parivartan, in Bihar, works in 36 villages in the district of Siwan, among many development verticals, among which, I was to lead an education project with the children of the nearby schools, to facilitate the learning of language through digital learning. This meant a lot of ground work right at the beginning- to first understand the education scenario at the local and institutional level, to understand what and how the community perceives education in general, is there enough willingness among kids and their parents to learn then to figure out the weak links in order to develop an intervention. To study, research and understand the education status I visited many government and low fee private schools of in and around areas for interactions.

My visits to government schools around left me stunned. Infrastructure, hygiene, unsafe environments-both physical & emotional, joyless learning - everything perturbed me. What I saw was a discouraging, demotivating classroom space with least focus on development of a child. I used to return from every visit, crestfallen during my rigorous field immersion days in the first leg of the fellowship. In a nutshell, the education provided in the government schools in these areas, added to the woes of every child, and their learning.

While growing up I was quite often asked this question “What do you want to be when you grow up?" I remember answering promptly every time “I want to be a doctor”. Even back then I had an answer, however vague it was and changed as time rolled by. We had people who cared about our aspirations, unlike many, whose circumstances do not allow them to aspire and chase their dreams. What I saw in those government schools though, was the inability to respond. It’s hard to believe that many of these children, especially girls have faced unthinkable obstacles just to attend school. To me and you all who are fortunate enough to read this were given education by default. We never had to struggle and worry when we were kids.

The Jharokha that was created: The Annual status of education report (ASER) highlights that about 50% of class 5 students are unable to read class 2 book. It was during the time that I was conducting my secondary research, that I found this. I decided to test this in the community I was working in. In assessed the reading level of children from the community, using ASER’s standard reading testing tool, I came to face with this :-

- Some of them even struggled in identifying letters.

- An interaction with class 8 girls of village Ruhiya Bangra government school couldn’t respond when I briefly mentioned about computers while talking to them. Upon asking, they stated, “they don’t know what it means”.

Points that emerged very clearly from these discussions made me realize the sore need of an intervention where their twin needs – language competency and digital empowerment could be taken care of. I contemplated to work on language deficit prevalent among kids by integrating technology into the learning process. Coincidentally, Parivartan had a dysfunctional computer lab when I had stepped in, a decently furnished deserted room with 11 computer systems placed well on round tables which appeared to me like a gold treasure. It was a sheer wastage of a significant resource in a resource poor rural setting where people are technologically illiterate and otherwise also educationally backward. I couldn’t just let that under utilized. My plan to revive this classroom was accepted, and I moved into execution. I set up the centre with all I could. Now all that I need were keen learners.

Life in rural India for children doesn’t mean attending exorbitant private schools, doesn’t mean being pampered and spoon fed by parents, doesn’t mean taken to malls and places every weekend, doesn’t mean given materialistic pleasures. The children here are not raised profusely as the privileged ones in cities. In addition to school, those who manage to attend, they support their parents by working on agricultural fields throughout the year, take cattle to graze, help in every sort of household chore which means their life is as busy as the grown-ups who learn the lesson of hardships quite early in life. 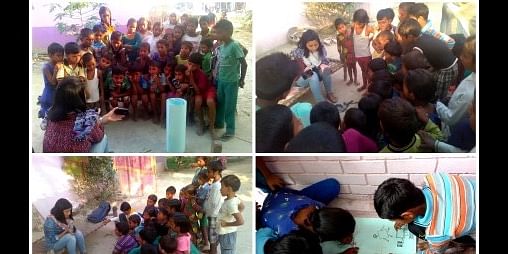 Teaching in the community

I started with sessions within the community itself, to reach out to as many children as possible, to spread the idea. After an initial rapport was established with the community, I urged them to visit the Parivartan computer centre for further sessions. Gradually, more groups were formed from schools and villages for full time sessions. Majority of them were first time computer users who had to start from scratch, to learn to operate the mouse and keyboard. After an initial familiarity with its basic functioning, I moved onto the next step where I introduced them to the internet and using digital platforms to pick up language skills. The initial struggle gave way to more confident learners, and that got me more determined. 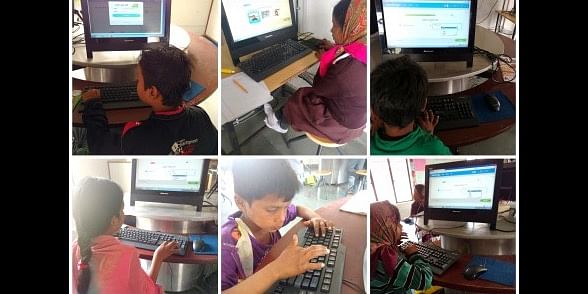 The digital literacy centre at Parivartan

Learnings: Significant moments came to me as milestones of this year. To sum up, in using a digital platform for developing language competency, a program was designed which catered to children ranging from grade 5 to grade 8. In the process of learning language digitally, the program has also enabled them to get comfortable with technology.

The word jharokha, by its literal meaning, means a small reticular window on the wall. In a dark room, a window has the ability to light up a dark gloomy room, in the same way, we need many reach out to who are raised in educationally deprived conditions in the village communities of rural Bihar. Knowing, that it is important to create a safe space where every child can learn at their own pace. In doing this year, I found many moments to cherish with a group of children who are now more confident both with language and with using a computer, browsing, chatting, and being more curious to take on the world.

India Fellow is 13-month long social leadership program for young Indians who aspire to understand social issues at grassroots and bring change in their own ways. Visit our website: www.indiafellow.org and you can also apply to be a fellow there!