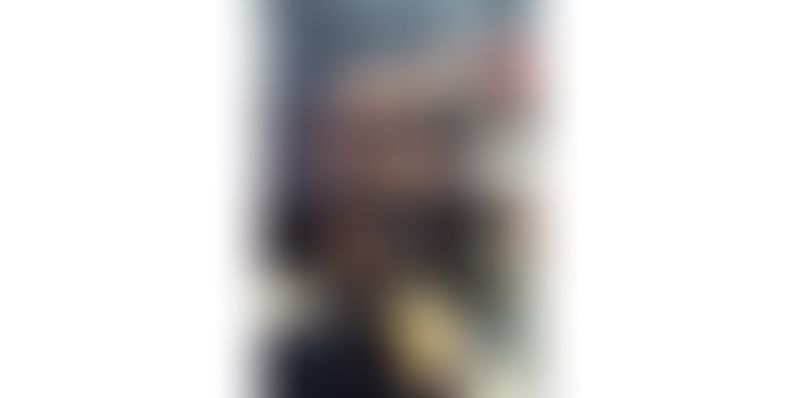 Most backpackers whom I know tend to stick to the delights of Kerala and the hedonism of Goa and Gokarna. If you are looking for some off-beat options, consider the coastal belt in Karnataka around Udupi. You can choose to base yourself in Udupi or Mangalore and explore a wide variety of things to do in the area. The region has something for everyone – revered temples, a long coastline of beaches, geological wonders, and some excellent food. While pilgrims do flock to Udupi given its fame as a temple town, it is yet to be besieged by tourists. This makes for pockets of quietude and untrammelled views of the sun as it goes to bed in the ocean. Easily accessible by bus and train from Goa, cities in Kerala, and Bangalore in Karnataka, Udupi is a hidden gem along the Western Coast of India. Here are five compelling reasons for you to explore the area.

The story goes that one day in the thirteenth century, the statue of Krishna got covered by sandalwood and that a sailor loaded it onto his boat as ballast. As the boat was sailing down the West Coast, it got caught in a terrible storm. Sri Madhvacharya, realizing the true form of the wood, calmed the storm using his divine powers and in return asked the sailor for the block of wood. Purifying it, he installed the statue in the temple at Udupi leading to the founding of one of the most famous temples in India. Today, the temple complex is a vast ashram and is considered to be a holy place for devotion and living. It draws several thousands of Hindu pilgrims through the year. 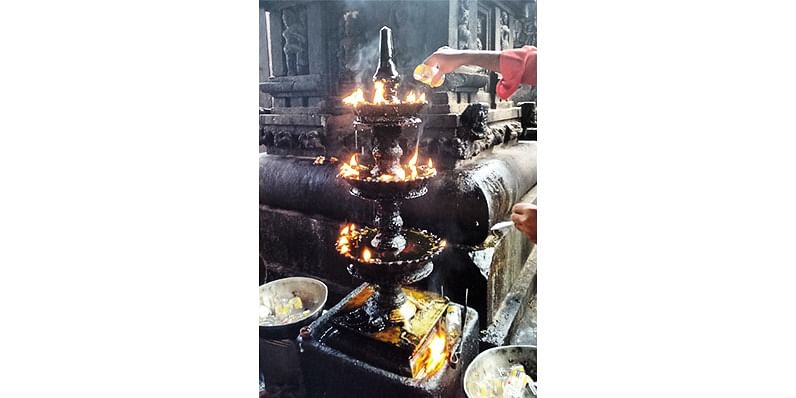 Prayers being offered at the Shree Krishna Temple Complex

I found it intriguing that the idol in the temple is viewed through a window that has nine holes, called Navagraha kindi. Further, legend has it that one day, Kanakadasa, a devotee of Lord Krishna came to the temple to pray.

However, since he was from a supposedly lower caste, he was denied entry. Krishna, pleased with his worship, created a window in the wall and turned to face the hole so that Kanakadasa could view him. The window is called Kanakanakhindi and exists today as an outer window.

To this day, the priests of the temple continue the traditions of inclusion and only a few weeks before I visited (in June 2017), in the month of Ramzan, they organized a communal meal inviting the Muslims to break their holy fast in the temple.

Non-Hindus are welcome to the temple. Men need to be bare chested while women need to be wearing traditional Indian attire such as a sari or salwar kameez. Prayers start as early as 5 AM in the morning. The temple is within walking distance of the bus stands (both state-run and private) and a pre-paid auto-rickshaw from the train station to the temple costs INR 70. 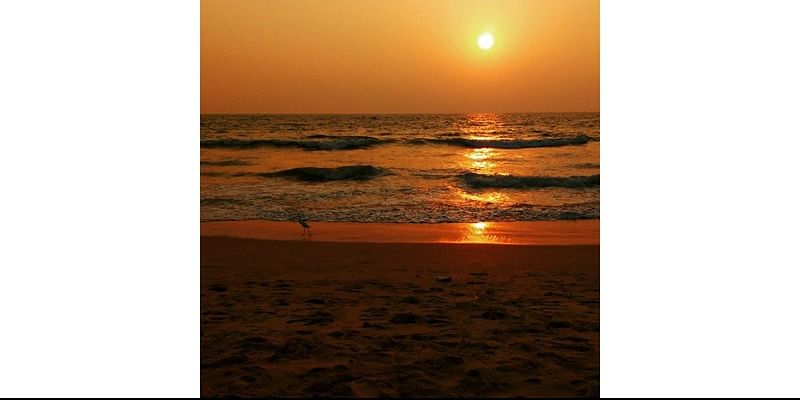 Bidding goodbye to the Sun

There are several beaches around Udupi that offer picturesque views of azure waves, white sands, the setting sun and the ubiquitous coconut palms, all for the price of a cheap bus ride. The closest is the popular Malpe beach that also has several water sports such as the jet ski, parasailing and speed boat rides. Kapu, alternatively known as Kaup beach, also draws many visitors. It has a lighthouse built in 1901 that is worth a visit, as are the ruins of Jain temples along the sand. About 50 KM north of Udupi is the Marvante beach where the road runs along with the Arabian Sea on one side and the Suparnika River on the other, making for some spectacular views. A similar, but lesser known option is Bengre Beach. The Suvarna River drains into the sea at Bengre, and a walk or drive up a long strip of land takes you the tip of the estuary. Here too, the road is flanked by the sea on one side while you can see boats snoozing on the banks of the river on your other side. Looking for other quieter options? The bus to Padubidri will drop you at the Padubidri Nagaraj Estate bus stop, from where the beach is barely a KM away. The peaceful Mattu beach and the adjacent Pithrody Udyavar Beach are other lesser known but fantastic options.

With the NH66 running parallel to the coast, the beach towns are well connected by public transport with the actual beaches being a short walk or autorickshaw ride away. 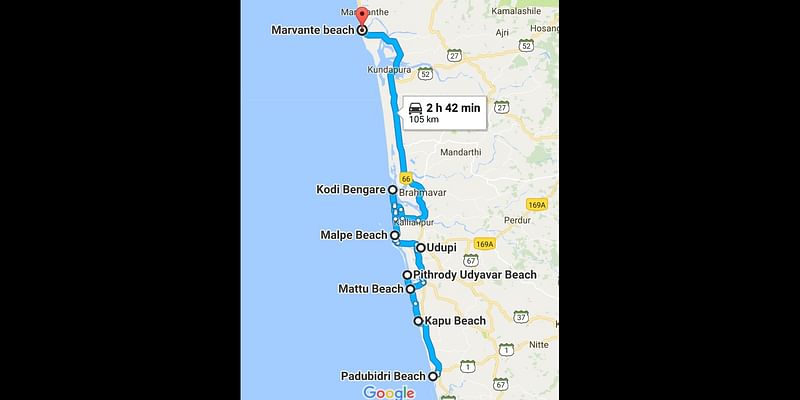 Beaches in the Udupi Region

What do the Giant’s Causeway in Northern Ireland, Fingal’s Cave in Scotland and St. Mary’s Island near Malpe have in common? A little known geographic phenomenon called laminar lava or basaltic columnar joints. Instead of forming shapeless lumps, the earth’s lava has formed perfect pillars of five, six or seven faces, at St. Mary’s, giving the island its unique landscape. Scientific studies indicate that these rocks were formed when Madagascar broke away from India, more than 88 million years ago. It’s little wonder that the Geological Survey of India has declared the islands to be a geological monument of India.

St. Mary’s is a group of four islands of which the northernmost island has the basaltic rock formations. Legend has it, that Vasco da Gama, the Portuguese explorer who discovered the sea route to India, landed at the islands in 1498. He supposedly fixed a cross on the island and dedicated it to Mother Mary, and hence the island’s name.

To reach St. Mary’s, show up at the Malpe beach and locate the beach hut that houses the ferry office. The ferry starts at 8:30 or 9:00 in the morning, with the last ride back being at 5:00 PM. However, the operators wait for a full load before commencing the trip, so do factor in some waiting time. The actual island can be covered on foot in about ninety minutes through marked and unmarked trails. There is little shade there, so try catching the first ferry or the ones later in the afternoon to stay out of the blazing sun. Do note that the islands are out of bounds during Monsoons and the best time to visit, is from October to January. 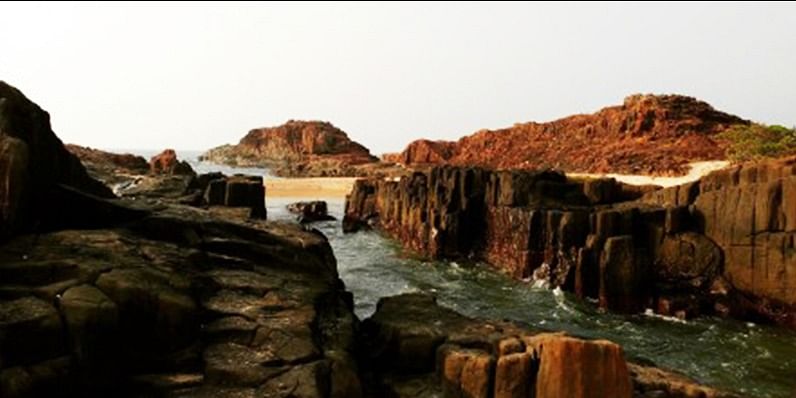 Birders, don’t forget to take your binoculars along for this stretch of the coast. Dainty egrets pick their way across the waves along the coastline, the showy kingfishers can be seen preening at St. Mary’s Island, and the Green Bee-eater was a regular across my breakfast table in Mangalore. If you make your way to the swamps around Karkala, you are sure to see storks and sandpipers fluffing their feathers amongst the lotus flowers. The popular beaches such as Malpe can be too busy for the shyer birds, and you may want to head to the quieter beaches. Mattu beach, for example, with its eco-system of paddy fields, estuaries and the coastline is a favourite haunt of several birds including several varieties of sandplowers and bitterns. Mattu is 12 KM south of Udupi and it is easy to get there by bus.

Read more about the birding around Udupi at the Explore Jungle Lodges site.

No list about India can be complete without food, and this one is no exception. Several South Indian restaurants across the country serve ‘Udupi’ style dishes – dosa, idli, chutney and sambar – humble vegetarian fare from Udupi. Here are some of my food-related recommendations:

● Let’s begin with idli, vada and sambar. The best place to have these is at breakfast at Mitra Samaj, within walking distance from the Krishna Temple. The restaurant begins service at 5:30 AM and for just a few rupees you can eat like a king (or queen). The sambar is quite sweet, the secret ingredient being jaggery, which can catch many by surprise. You could end your meal with a serving of Banana bun (deep fried banana bread batter) with strong filter coffee for company.

● Lunch can be the quick vegetarian thali – a complete meal of sambar, rasam, rice, buttermilk with various vegetables such as pumpkin, gourds and jackfruit. You can head to the iconic Woodlands that is quite a crowd puller, or return to Mitra Samaj. You can also dine at the temple, for free, where they cook food in large drums and vats for dozens of people each day. Keep an eye out for dishes with Mattu Gulla, a green brinjal speciality of the region.

Cooks at work in the Udupi Shree Krishna Temple

● Want something to snack on? Look no further than Goli Baje at Mitra Samaj (I know, I know, most of my recommendations lead back to Mitra Samaj!). Served from late afternoon onwards, the Baje are made by deep frying batter made with flour and curd. Had piping hot, along with coconut chutney, these are lighter than air and sure to transport you to a coconut scented and cloud filled heaven.

● Round up your tour of culinary delights with some Gadbad at Diana restaurant. I was told by several people to not miss Gadbad – which literally means ‘something’s amiss’. I finally ordered one to wind up my lunch with. Imagine a tall glass, filled with scoops of ice-cream of various flavours, with fresh fruits and jelly liberally tucked in, generously garnished with nuts and mystery sauces. Gadbad is a real fun, if a tad luridly coloured, dessert to eat!