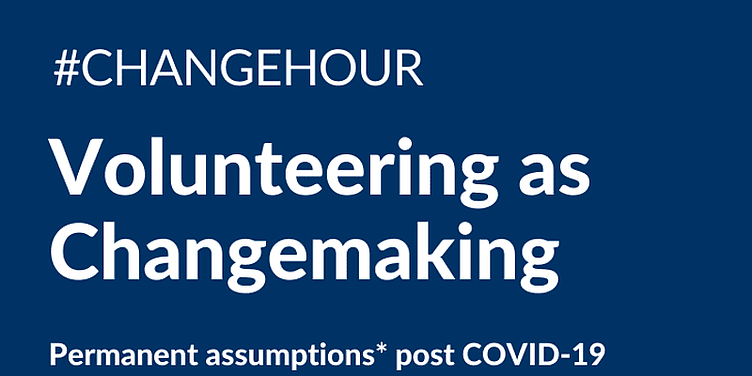 On a rainy Friday evening early in the month of July, we prayed to the digital Gods for good connectivity as we gathered around our laptops for an hour. CHANGEHOUR.

ChangeHour, initiated by Ashoka Changemakers South Asia, is an ongoing conversation to action series that brings together people creating positive change collaboratively across key sectors. The first ChangeHour discussed the topic of Volunteering as Changemaking: how the simple act of volunteering shaped and reshaped many critical services during the pandemic and the permanent assumptions that can drive this change more deeply going forward.

Joining the conversation were moderator Ashwin Naik, Founder Manah Wellness and Ashoka Fellow, who has built a national campaign called Corona Champions, and is bringing mental health conversations to the forefront. Mukteshwari Bosco, Healing fields Foundation and Ashoka Fellow also joined in. Her team has been working with volunteers to bring dry rations to people and managing a COVID symptom response centre apart from channelizing community health facilitators. And the final speaker was Maanoj Shah, CEO Gift change.org, Corona Champions and Khaana Chahiye who has been building an initiative to distribute meals for those who needed food support as well as driving this narrative of positive change, nationally.

We need to talk about Mental Health: A positive way forward

Early in the crisis, in the month of March itself, Ashwin Naik set up a volunteer driven health line called Let’s Talk, focused on providing mental health support to communities which are in distress. They started working with volunteers to reach out to communities. And one of the organizations that joined them early on was Healing Fields. During these discussions, a critical insight they found was that there was an increasing fear and stigma in people’s minds around the COVID-19. That was the germination of the thought of celebrating positive news that could break the cycle of negativity. It was the beginning of Corona champions. Maanoj also joined in with his efforts and initiative around the same time. Common to all their work was the power of volunteers who helped build these initiatives. They found an incredible level of engagement, particularly from young people who stepped up and said, how can we help. These are their learnings.

The importance of communication:

Even before the pandemic, Healing Fields had been working with Women Community Health facilitators. One of the key things that realized during the pandemic is that apart from hand wash and personal hygiene which were important areas of training, nutrition was a major issue. With the exodus of migrants from the cities, they needed to help the villages scale up their healthcare facilities. They activated about 1200 women from across villages to identify primary schools, or houses, which were not used and convert them into quarantine centres. These women were the first volunteers who started working in cleaning these areas, and making them habitable ensuring access for food, water, sanitation. Beyond physical health, mental health emerged as the other key gap as well which is where the Let’s Talk helpline came in. They started disseminating the information while the women volunteers worked on understanding needs of families, providing masks and rations. From there, they found a flood of volunteers. Many of them offered support in terms of fundraising. Volunteers needed insights about the organization. What really helped them was daily communication with them in identifying key areas of support and channelizing support through the community. Ongoing newsletters and social media communication were also critical. Cheering, collaboration, and constant communication were the three pillars to keep the efforts going.

A hunger for volunteering:

Meanwhile, for Khaana Chahiye, it was a concept that came up during the pandemic, one of the fastest startup ideas to be created from scratch during this crisis. Maanoj realized that everyone wanted to do something, but they were not sure how they could help. They started with food as that was something that people easily associated with and it was the most basic and critical need. With a couple of members who owned restaurants, they mapped out the hostpots for food requirements in Mumbai and started activating kitchens reaching over 70,000 meals per day. Almost everything they developed was crowdsourced from demand to funding to volunteering support. A clear demarcation of roles helped from restaurant activation to managing the distribution and ensuring that every demand that came in was fulfilled to perfection.

Music and volunteering: Each one has gifts:

One big gap in volunteering sometimes is that people believe money is the only way in which they can help. What the learnings from the speakers showed is that people could help in any capacity based on their skills or their time. For example, a Chartered Accountant could utilize her skills to handle Finance, or a communication professional could support with storytelling and volunteer communication. Each person could look at giving in different ways based on the strengths they uniquely have. One interesting thing they found is that one of the volunteers was a rap singer and the song that the singer created found huge support on social media and became a key message for the movement of change connecting many people who they could have not have reached through other channels.

Volunteering as a currency of hope:

If volunteering is looked as a currency rather than just a free resource available, then it will be utilized and channelized wisely. Through volunteering, people give a part of themselves and it is important to recognize and celebrate that. More importantly, volunteering must drive people towards hope. At the deepest level, as people volunteer, it helps them find purpose and bring hope to someone else who does not have that.

The stories of the speakers also inspired changemaking stories from the audience. One of them, a young teenager, shared how he, along with his brother and other friends created an initiative called Santa’s Brigade. They started with donating masks to people during the crisis. Recently they found women lacking sanitary napkins and started providing that. Their plan was to collect donations from people, but they realized that this was not a sustainable way to drive they program. They started undertaking activities in their communities like carwashing which would enable them to raise money, through service, and then bring that back to the volunteering activities. In a short time, they had 55 members and are finding more new ones, every day.

Volunteering for many people, is the first taste of changemaking. A first glimpse of a shared purpose in life. It does not mean that all volunteers would quit what they were doing and jump into only volunteering. Will this volunteering led change continue when the pandemic ends? While no one can guarantee that, with people realizing the power of change through volunteering, it can only create a ripple effect with a more positive world where change does not wait for government action or someone else to take the initiative. Change can happen because everyone is and can be a Changemaker. And yes, in the days that followed the ChangeHour, people reached out saying they wanted to volunteer with these initiatives, bringing another new set of volunteer changemakers through ChangeHour, our campfire of change.