Comparison Between Swift and React Native 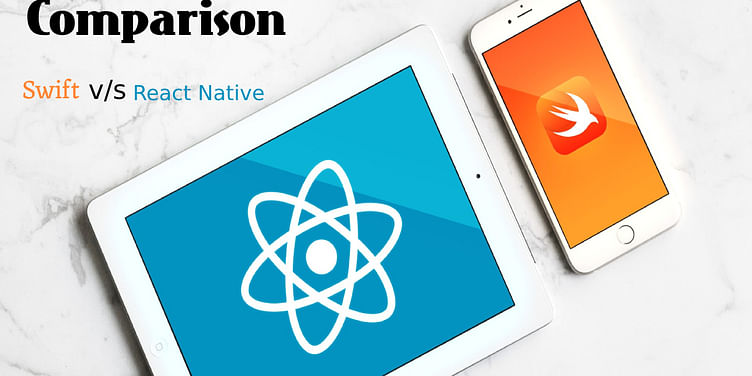 Which one is better to use, React Native or Swift? This is exactly where mobile app development becomes quite essential. choose the one that suits the best suits the individualised needs.

Mobile app development forms a major part of the businesses in the recent times. The use of mobiles has become an integral part of our life and hence the businesses have developed mobile applications for necessarily providing a better experience to their customers. This is exactly where mobile app development becomes quite essential. Now, at this point of time, there arises a confusion among the one to choose between swift and react native. So, here is a comparison between the two so as to eliminate the confusion and choose the one that suits the best suits the individualised needs.

An Idea About Swift and React Native

Both Swift as well as React Native are mobile app development technologies thereby play quite a vital role in the development of different types of applications for mobiles.

Swift is actually a general purpose and multi paradigm complied language for programming that is developed for iOS and Linux by Apple Inc. Swift necessarily supports Cocoa and the Cocoa touch frameworks of Apple

A Comparison Between React Native and Swift

The IDE from Apple helps in the development of quite advanced and the applications that are user friendly in nature. Now, considering the React Native, it allows the mobile app developers to build applications for Android, iOS, and Universal Windows Platform making use of the Java Script. It is basically a cross platform mobile app development framework but with a difference. With the help of React Native, the developers are not allowed to build a mobile web app. This framework helps in the compilation of the Java Script codebase to a mobile application quite similar to an iOS application built with Objective C or Android One with the use of Java. This, it is quite clear as to why Reach Native has an edge over the Swift of both the native as well as the hybrid technology. It is now clear that both the small projects as well as the bigger ones can enjoy the benefits by using the React Native framework. A detailed comparison between the two that is React Native and Swift are as discussed below.

Now, considering the design layout, Reach Native offers hot reloading which helps in keeping the apps running and at the same time allows the injecting of new versions of files which have been edited during runtime. This in turn is quite helpful in the preservation of all of the states particularly at the time when the developers are working on the UI.

Moreover, the components are not all the same of React Native and Swift. React Native is an open source project and has earned a good amount of popularity mainly because of the fact of an active community along with Facebook support. There are many functions are not available but still some of the scenarios where the modules tool of React Native can be used with a npm package which works well for some specific issues.

Performance is one of the most important considerations for mobile app development particularly, the more efficient one is preferred. Usage of CPU, allocated memory and energy impact for the different tasks are the three vital factors that help in deciding the efficiency. In an addition to this, it is essential to note the opening as well as the scrolling speed of the language list for calling that is the frames per second.

Mobile app development using the React Native framework is certainly cost effective in nature and a short development cycle as well. It is comparatively much easier to learn and convenient to debug thereby making the training part for the companies much easier as well.

Thus, now it is quite clear as to which of the framework is to be used for mobile app development as per the needs and requirements.