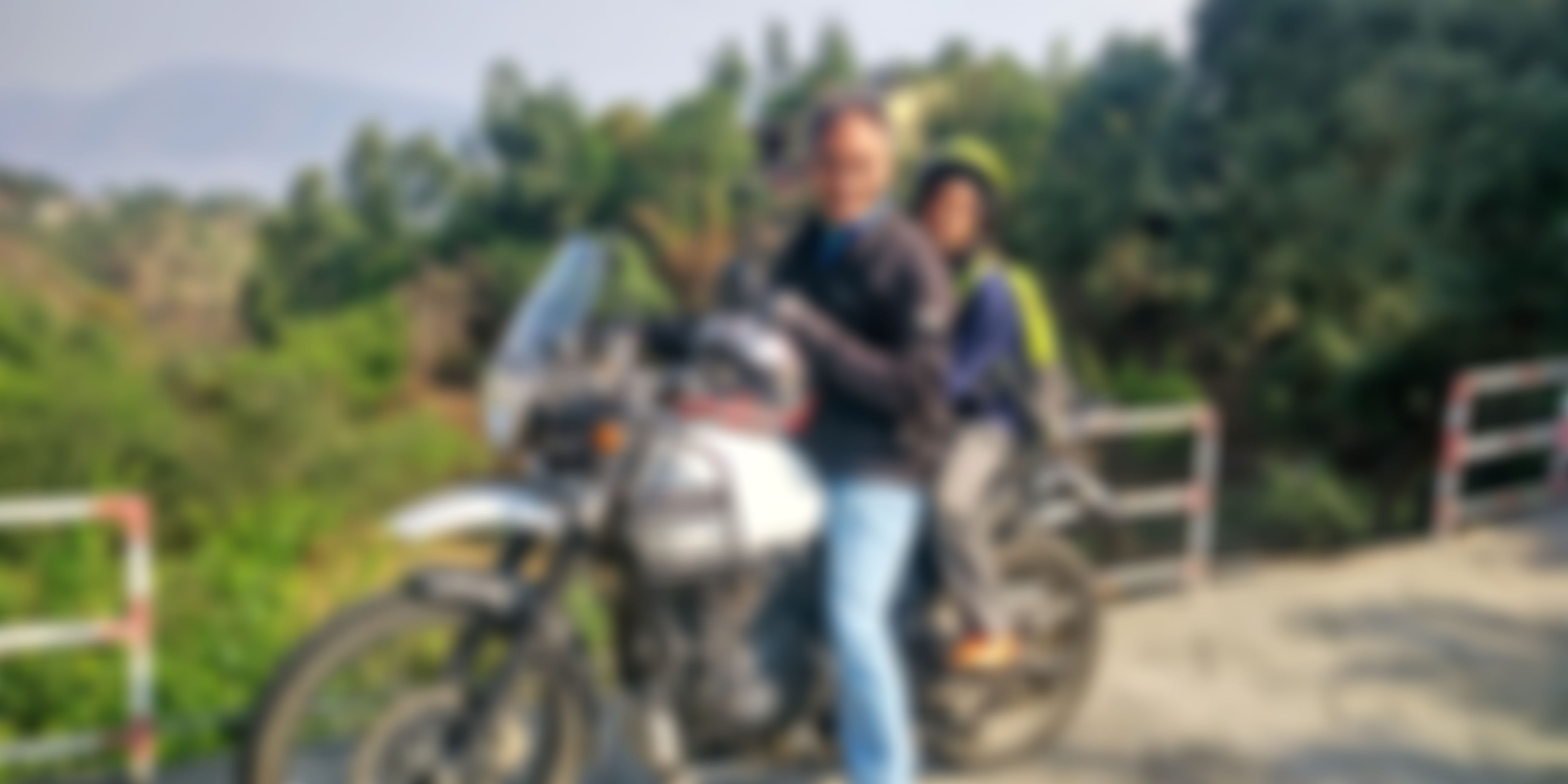 An 8-year-old girl and her father's gentle adventures in the Kumaon Himalayas. 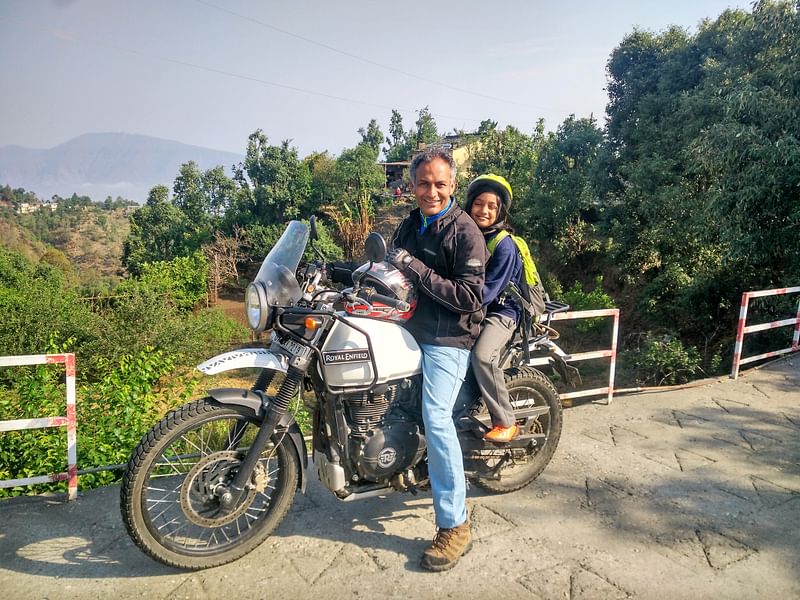 The Hindi language is unfair to fathers. It has a beautiful word for motherly love, but nothing for fatherly love. Mamta – the word for mother's love - also doubles up as a woman’s name. That means you cannot use that for a father’s love because “Papa ki mamta” (or father’s Mamta) starts to sound like an extramarital affair.

It was partly that fatherly love which had driven us from the city to a Himalayan Village over two years ago. One of my goals was to spend more time with my kids. My daughter - let’s call her R, has entered grade 4 and is not yet 9 years old. She has a natural ability to climb things – be it a tree, a stationery adult, or a rockface. Since we live in the Himalayas, rock climbing is a natural hobby to pursue. Last year both my kids and I did a rock climbing course in Nainital along with one unsuspecting cousin who hasn’t been sighted in these parts since.

We needed a follow-up to that course and through some friends we got in touch with Anit Shah. Anit is an Everest Summiteer who runs his own outfit called Altitudes. Through this he introduces school kids to the many joys of Himalayan adventures. Anit generously invited us to be a part of a rock climbing camp he was hosting for some seventh graders from Faizabad. We grabbed the offer with both hands.

We would have gone as a family but my son’s leg was in a cast from a broken shin bone. Also, our paleolithic car has gone beyond the local mechanic’s jugaad abilities and now needs the services of an M.D. in geriatrics. So, we had to fall back on my trusted motorcycle, the Himalayan, which meant this would be R’s first long bike trip.

We suited up – me with all my gear including knee guards, biking jacket and protective gloves, and R with her cycling helmet. I thought it unfair, then an epiphany struck: the airline announcement, “please put on your own mask before helping your child”.

We rode out and I could hear R – an instinctive animal lover – say “so cute” everytime we rode past any herd of cows with a calf. We parked near a hillside above Bhowali strewn with large boulders. Here Anit was initiating 116 seventh-graders into rock-climbing. In many separate groups we attempted to put that morning’s theory into practice. Anit’s personal attention helped R take on some of the more challenging boulders.

That evening, tired but happy, we stayed at 8000 feet at the fabulous Altitudes campsite. In the class on knots that evening the instructors showed us the ropes (sic). At dinnertime a few of the seventh graders walked upto me and hesitantly asked

“Uncle do you want to make R a mountaineer?”

“Then how come you are here with us?”

“R loves climbing rocks, and so I told her about Anit uncle’s invitation and the plan for these two days. She chose to come. See, I can take her to places where she can climb safely and where she can get better at it. But what she will become only she can decide. How can I decide that?”

They walked away, looking like they had more questions now than the one they started with.

After jalebi overload for dinner , we slept soundly but were woken up early. Campsite sounds of 116 seventh graders all wanting to go to the washroom in unison are not exactly ambient. Thanks to the early rising, I was lucky to catch a glimpse of a magnificent sunrise. 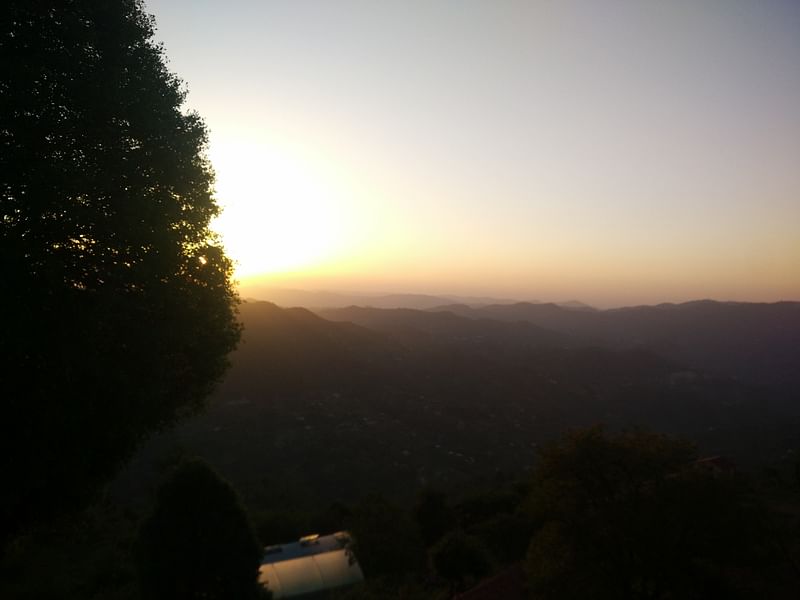 Dawn at the Altitudes camp,

That day’s plan was to ride to Nainital and climb the rocks at the Nainital Mountaineering Club. We suited up and rode out. Summer vacationing hordes had created massive traffic jams and it was warm. I was glad to be on the bike. We reached the Nainital Mountaineering club and R was in her element. Anit soon had her demonstrating stuff to the newcomers. After having done a few simpler slopes , she also successfully climbed the 50m vertical wall called limestone rock. While waiting in between climbs, she would chase after the rock lizards saying “so cute” while the other kids all ran in the opposite direction. After an exhausting morning, we rewarded ourselves to a big city lunch – a luxury we don’t have in our little Kumaoni village. We replenished our fuel and food supplies and headed home to a simpler life.

As we rode back, R hugged me with both arms, and the occasional squeeze made me feel like the luckiest father alive. I guessed R still had food on her mind as she observed:

“Papa, the bike sounds like it is making pop-corn for us.”

“We should check the engine when we get back. Maybe we’ll find some popcorn in it” I replied with a smile.