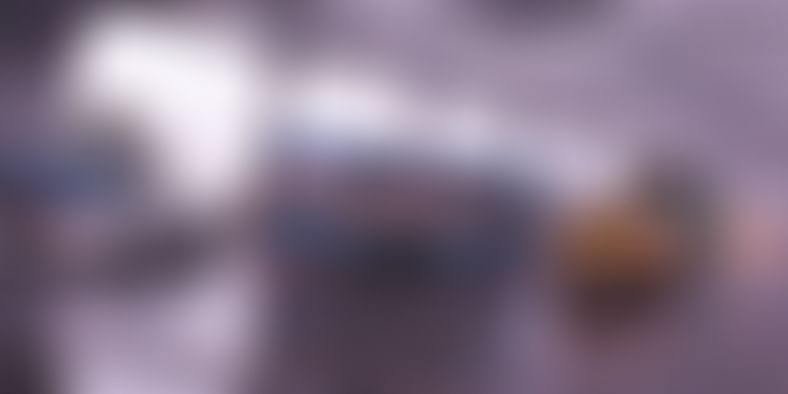 A dream destination welcomed me with heavy rain. Got into the first bus which was parking right in front of the railway station. Next moment I realized this bus will be crossing Howrah Bridge to reach my stop at Esplanade. I didn’t knew the dream going to be true so soon. Traffic was hectic when the bus got into the lines of Howrah. The glass windows was blurred with the views outside and through it could see the yellow taxis flying like beatles. The city has two parts to say. One is the ancient and the other is glamorous one. The blend of both makes each frame you click here more beautiful. The bus stopped right in front of the Metro station to Patuli.

When I get down from the Metro train and bargain with the rickshaw, I knew that handling Hindi with Bengalis seems little different. I have to slow down bit by bit and finally added with some gestures I made my ride with him. In the beginning of the ride it was fine but as it got closer to Gala Time hostel, where I stay, the water level was above my knee. The driver parked the rickshaw as closer as he can. Then it was y turn to hold up the jeans and pull down the socks and shoes. I paid an extra ten rupees to him on his last minute bargain.

Gala time hostel was not the same as AAO or Stops. It was a small one running in a 3 bhk and my room had 3 bunker beds and all are Indians. Staying for various reasons but not travelling like me. Soon I go few friends among them and haa I forgot to mention, my all roommates are males. The only female inmate was checking out on the same day I checked in.

After a quick fresh up when came out of wash room, there was someone else sitting on my bed. It was Mini, little kitten of Gala Time. From others knew that she is a pet of others who stays there and she has all privilege to climb up to anything, anywhere. She was easily tamed and the moment I started patting her jaw she was on my lap. After few minutes I waved at Mini and started my first day at Kolkata.

Here also my guide was Google map and that’s how travelling in Metro and in bus I reached at the gates of Victoria memorial. But this time it was bad luck and only the garden was open as it was Monday and its holiday. The most prominent marble structure of the country was standing in front of me. And atop of the centre dome was standing structure of Angel of victory. As you all know the country’s well known marble structure is Taj Mahal and the same Mankrana Marble is used to built Victoria Memorial too. 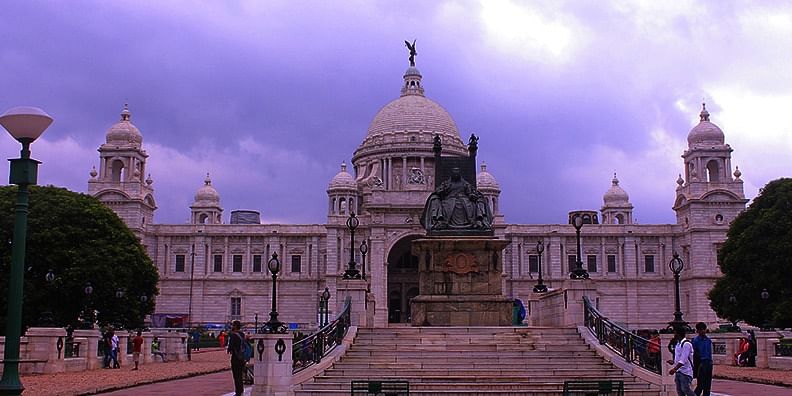 The garden around the main monument was beautiful with green lawns and water fountains. The visitors was still flowing in even in a holiday. Many times the rain came and gone during the visit to the garden.

I stepped out of the garden and started walking towards the direction where it shows Maidan. Destination was the bridge which strikes me from the Victoria memorial garden. It was Vidyasagar Setu. Searching and finding the bridge, I ended up in front of Fort William. To say the truth, I was depicted by the name “fort” but it was an army camp with their residential buildings and offices. Parallel to the road there was a tram line was going on. Haven’t seen one yet but still thought of waiting for one. And it was never ending till next 30 minutes and I changed my plan and started moving towards Vidyasagar Setu. I saw guy who is coming in my direction in cycle. I just confirmed him the direction towards setu but in his suggestion it was too far away from where I am standing. Then still again I asked him about Fort William and that he confirmed that I need special permission to get in but he can help me.

He looks like a very normal guy in his knee length shorts and oversized t shirt but his mother is working inside Fort William pharmacy and they have flat inside that. Along with his appearance it was quite unbelievable for me and yeah, his name is Raju. In his cycle back seat we roamed around the compound and show Vidyasagar Setu from distance and then left. He didn’t forget me to drop to bus stop and made sure I got the right bus to Howrah. 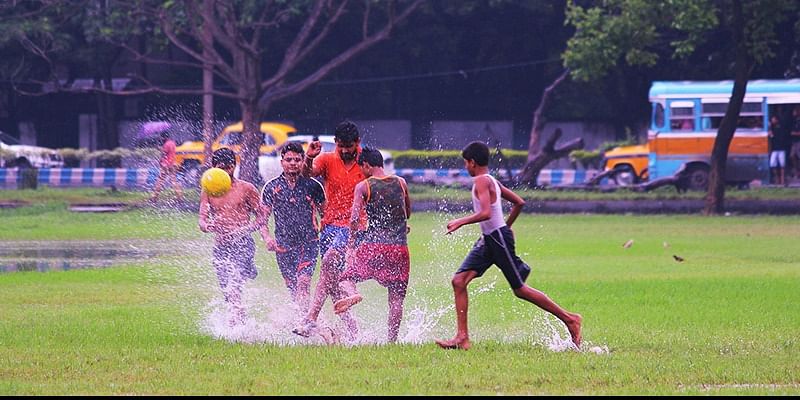 Howrah – it was crowded as usual and spent some time watching the river and started hunting food for survival. It’s a heaven for street food (be careful about your stomach) and it was Chowmeen I chose for my dinner along with an egg roll. Once I finish it I found something new, aay its not any new place but I knew there are direct buses from Howrah to Patuli. I got a seat in low floor bus and it took more than an hour to reach Patuli with heavy traffic on the way.

For next day the plan was set for Bholpur to visit Shanthi Nikethan. Stared early and came back late. In this two days Kolkatta was almost being like a hometown. The three day spent there was not with much plan and that’s how got out of hostel on last day. Where to go and what to do was not in list but Dhakshineshwar Kali temple was in mind. So as usual boarded Metro to Esplanade and from there to Shyam Bazar. It was so crowded when I got out of station after my breakfast of Momo. Some public exams was going on and the nearby schools main gate was crowded with candidates and their parents. Stood there for a while watching the crowd. Then got in a bus to Kali temple and again another auto which cost 5rs from the bus stop. It was easy to found the temple as a long queue of devotees was moving towards the main gate. I too followed them and the temperature was slowly raising and there was no shade to stand except the small pond at the side of temple. 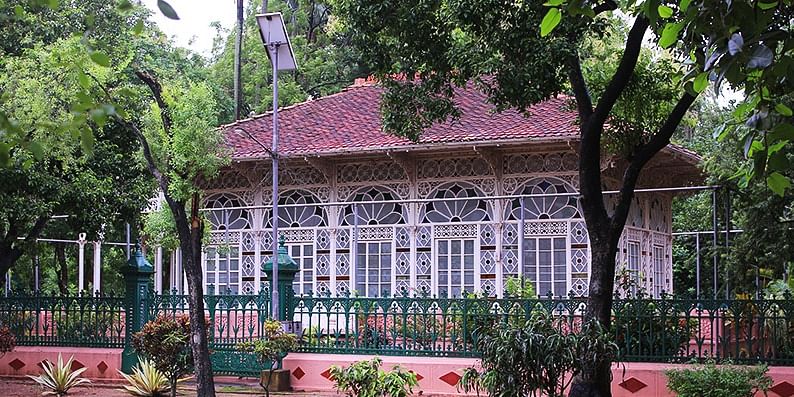 Security was strict at temple and camera or mobile or any kind of baggage in hand was not allowed to take in. there was a counter to keep everything safe. Luckily with not so much crowd I completed my “darshanam” and got out. Before turning to the temple I had seen a bridge on my way and it was next destination. Don’t know its name but it was beautiful as our Howrah and those whoever crossing the bridge was slowing down a bit in a place from where they can see the Kali temple and silently pray for few seconds and leave.

Seeing my social media post one friend was recommended to visit Belur Math nearby. Tried with few people asking the direction or the bus stop but the effort turned fruitful after I am seeing a low floor ac bus coming on my way. Thankfully it was written Belur Math in English so there was no need to ask much queries around. It was an escape from the scorching sun and the bus’s last stop was Belur Math.

Soon after getting out of the bus I got a small rain. Enjoying the drizzle I reached the main gate of Math. It was heartbreaking to know that the entry time for the day was just got over 30 minutes back. I stood there holding the iron rails in gate. I was able to see the green lawn and nothing else. Returned back to main gate and got a bus to Howrah.

I got down in middle of large traffic jam in Howrah. As I said before there was no particular destination in mind. So saw another bus written on it side Salt lake. Conductor came with ticket few times later when the bus left Howrah. Then only realized the bus was not going to Salt Lake but to Sealdah. Without any regrets I took a ticket to Sealdah. It was the last stop.

The bus slowly gets into the traffic of old city and there I saw that! Yes! Tram moving through the traffic. Without thinking much I got down from bus and waved my hands to the keep coming tram. The driver gestured me something which I was not able to understand. It left the place without any stop. The same repeated for the next 2-3 trams too. I changed my location to the other side of road. There was another tram was coming in. This time it stopped. Their depot was close to that and that’s what the drivers indicating to move to other side and it was going back to depot. Anyways my dream comes true. The ticket cost was just 5rs. There were hardly 8 people and everyone was getting down at different places and I sat simply enjoying the drizzle outside. 30 minutes was gone and I started seeing the familiar places started coming to view. As it reached Esplanade metro station I got down from the Tram.

An eventful three days at city of joy was coming to an end. Catching next metro train, reached Hostel. There is still few hours for my train. Packed bag and spent few hours with the other mates there and Mini, our little kitty. Rizwan was young among them calling me Sister since the day I checked in there. After few hours I left with my bag. Rizwan came along holding m bag to bus stop. Made sure I got the right bus to the railway station.

Those who coming to the city

You will get a lot of street food from Howrah

Budget hotels and backpackers hostel are there many

Do visit in Monsoon those who love Kolkata

Make time to wander through the streets – Must!