Kantabai: A Story That You Don’t Get To Hear Often 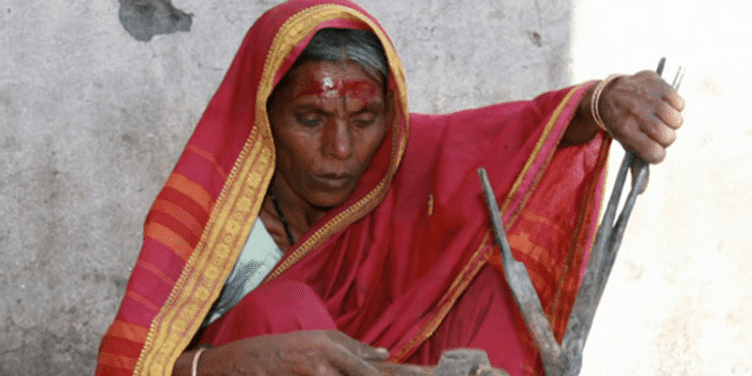 The woman who is often feted across the world as an epitome of the power of change and as an example of how poor women are able to access finance, is living in conditions that can hardly be called liveable.

As I was walking via my usual route to the sabzi mandi (vegetable market), I noticed a group of people sitting in a flimsy yellow tent. I had actually been fascinated by this yellow tent for a couple of weeks, as I could see its movements from the window of our office. First, I had noticed it vaguely on the horizon. Over the next two weeks, it had inched closer to our workplace, and was now almost adjoining it. I was curious about the people in there and where they had come from, so I decided to find out.

To my surprise, as I approached them, one of the figures, a lady in a green sari, began walking towards me. As I came closer, I realised the lady was none other than the legendary Kantabai!

Kantabai was the source of inspiration for the founder of the organisation I was working with, Chetna Gala Sinha. The story goes that Ms. Chetna had been so distressed by Kantabai’s story of not being able to open a savings account, that she was moved to start the first cooperative bank run by and for rural women, the Mann Deshi Mahila Sahakari Bank.

I had had the privilege to meet Kantabai at the recently concluded Mann Deshi Mahotsav in Mumbai, where she had come to sell her iron vessels, which she welded for a living. At the Mahotsav, I had only managed to have a short and rushed conversation with her, due to all the customers and curious urban folk lining up beside me. I was amazed that she seemed to have remembered me and was now beckoning me to come talk to her.

Kantabai was surrounded by her large family of four daughters and one little boy, who I later discovered was her grandson. Her makeshift home, the yellow tent, had blankets, and utensils stocked inside it. Two of her daughters were hard at work, hammering out a sickle on an anvil. There were also a pair of bellows, which were pumping air into a fire, over which another daughter was heating an iron piece using a pair of tongs. While I was taking all this in, Kantabai had set out a rug on the ground and was insisting that I sit down. Although it was difficult for us to have a conversation because of the language barrier, we somehow managed to communicate. Kantabai told that her family used to live near the municipal ground before they moved to this part of the town.

They would make iron utensils, sickles, hooks and other equipment, selling them at the weekly market in Mhaswad. Kantabai was quite happy with the sales she had made at the Mahotsav, but said that she had used the entire amount of 10,000 rupees to repay her loan from the Mann Deshi Mahila Bank. I couldn’t help wondering what the benefits of the loan were, if she had to forego all her earnings to pay it back.

It was the first time I had seen such poverty in my time here at Mhaswad. Even though I had been to drought-affected villages in nearby areas, I had not seen such a way of living before. Over the course of several visits, I saw the family scrounge for food and money almost on a daily basis. They would beg from their neighbours and take on odd jobs in order to just make ends meet. Her children had all discontinued their education after middle school.

Although Kantabai had the foresight to take out loans and repay them on time, she and her family still lived from day to day.

I could also see the Feminization of Poverty in play with Kantabai’s family. Most of the men, including Kantabai’s sons and sons-in law, were heavy drinkers and contributed little or nothing to the family income. They had become added burdens to the women and girls, who were disproportionately bearing the consequences of poverty, perpetuating a vicious cycle.

In a recent instance that bears out this fact, one of Kantabai’s daughters, who lived in Akluj, gave birth to a child, but has been forced to leave her home due to her abusive husband. She now stays with Kantabai on the streets, along with her newborn and three other children. My interaction with Kantabai and her family really brought home to me the institutional and structural barriers that make poverty so difficult to overcome. I gathered that she belonged to the Lohar caste group, whose traditional occupation is iron-work. Lohar is a lower-caste group that can be listed under both OBC (Other Backward Castes) and NT (Nomadic Tribes) in Maharashtra.

Although I did not observe any instances of overt discrimination towards Kantabai’s family from her neighbours, there was certainly an undercurrent of tension that I couldn’t quite place my finger on. The families living in the surrounding houses were occasionally generous enough to give food and sometimes money, in exchange for odd jobs and household tasks in which Kantabai’s daughters would help. They would also allow their children to mingle freely with Kantabai’s daughters and grandchildren. However, they would subtly show their discomfort whenever I interacted with the family, either stepping in to mediate the interaction or asking me later for a full report of our conversation.

The irony of the situation also failed to escape me. Thanks to her association with Mann Deshi, Kantabai was feted across the world as an epitome of the power of change and of poor women being able to access finance. But here she was, living in conditions that could hardly be called liveable. Her family survived on the occasional charity of their neighbours. Without education and skill training, her children seemed fated to live out their lives in the same fashion as had their mother. As far as I could see, there was not much about her daily reality that had changed.

Despite these discomforting truths, I accept that my discussions with the organization's staff revealed that a few efforts had already been made to skill train Kantabai’s daughters. Unfortunately, in most cases, they had dropped out. The program staff also neglected to take follow-ups due to difficulties in locating and contacting the family. However, now that they have moved within a stone’s throw from the bank, it should be far easier to convince them to attend the trainings. Her daughters herself have begun to take interest in learning computer or tailoring skills.

Mann Deshi has also partnered with Haqdarshak, a technology-based platform that connects people with the government welfare schemes for which they might be eligible. Thus, the primary gap in implementation of these schemes, which is lack of knowledge about them, is eliminated. We plan to use this platform to help Kantabai access schemes for which she and her family are eligible.

The poverty of means, which Kantabai’s family suffers from, in no way implies a poverty of spirit. Their family is truly one of the most generous families I have come across in Mhaswad, despite being one of the poorest. Even when they barely had enough to eat, they would insist on me joining them in their meal.

Kantabai herself is a remarkable woman. She has weathered many hardships and much pain in her life, including the loss of two of her children. Despite her advancing age, this diminutive woman, in her trademark green sari, remains the nucleus of her large family. However, in spite of the tremendous strength and courage shown by Kantabai and her family in facing every day, their situation can only be regarded as a failure. A failure of our institutions, our governments, our societies. A failure in which we all are implicated.

About the Author: Adrija Chaudhuri is an India Fellow, working with Mann Deshi Foundation in Satara, Maharashtra as a part of her fellowship. She is supporting digital literacy and goat paravet project teams with documentation, impact assessment frameworks and social media.

3 Reasons why Microsoft's LinkedIn acquisition could be a game changer