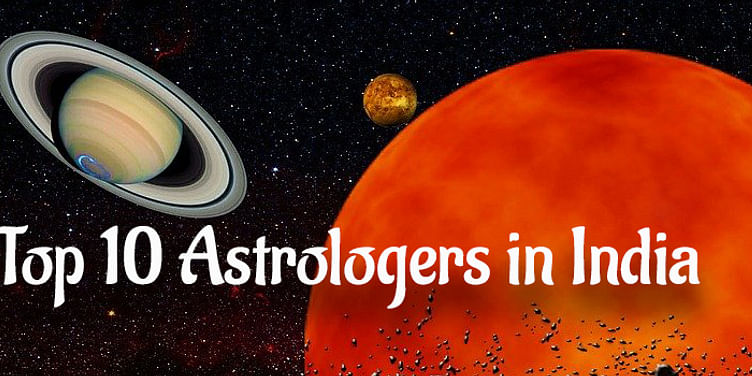 Today, Vedic astrology is gaining cachet in the West, as it is believed to be more precise and accurate than traditional Western astrology.

India has some of the best astrologer in India. Many of them are practitioners of Vedic Astrology, but in tune with the trends, some of them have also mastered other occult sciences like Numerology, Palmistry, Tarot, Kabalah, I-Ching, etc. in order to cater to different tastes and give more nuanced predictions. Vedic astrology is different than western astrology, and it has come from the Vedas, the great Hindu texts of antiquity. Today, Vedic astrology is gaining cachet in the West, as it is believed to be more precise and accurate than traditional Western astrology. Its spiritual underpinnings also ensure that it is less about fortune-telling and more about the evolution of the human soul as it strives to unite with the Divine. Let’s see who are the top 10 astrologers in India.

One of the top astrologers of India, Daruwallla is the astrologer for many rich and famous people. His articles appear in many newspapers like The Sunday Times, News India (New York), etc. He has also published many books. A Ganesha devotee, Bejan Daruwalla was named in The Millennium Book of Prophecy, as one among the 100 influential astrologers in the last 1000 years. The book was published by Harper Collins, USA. He has won several accolades for his accurate predictions. Bejan is an expert in many occult sciences like I-Ching, Kabalah, Palmistry and Numerology, apart from Vedic and Western astrology. He combines the principles of all these to come up with his predictions. The right combination of these principles enables him to make highly accurate and relevant predictions. He is gifted with great intuition. He is also well-known in the USA. He is associated with many TV channels. His predictions appear regularly in many leading dailies in India and abroad.

Bhambi is a Postgraduate in Economics as well as a Law graduate. He was a lawyer before he took up astrology. He has authored many books and a celebrity astrologer who has acquired global fame. Actors, sportspeople, politicians, musicians, writers, models, and artists are among his clients. As an astrologer, he seeks to provide his clients with the right knowledge to deal with their problems. His accurate predictions are truly amazing. He is a noted TV personality and a prolific writer.

Vijayalakshmi Krishnan is one of the best astrologers in the country. She has two decades of experience in Vedic Astrology and has been with AstroVed for 15 years, and has over 50,000 consultations to her credit. She is gifted with great intuitive powers, which she considers a gift from God. She believes that bad karma that carries over from our past lives has the power to affect us in this life. She is an expert in identifying such karma and proffers effective remedies for them. Astrology is a passion for her. Using the divine visions she receives while praying, she provides solutions to her clients. Her rich experience in Karmic Astrology, Medical Astrology, Electional Astrology, KP, Numerology, and Gemology enables her to identify the underlying cause of people’s problems and come up with the right solution.

Dr. Sharma has made several predictions in leading dailies like The Hindustan Times, The Times of India, etc. He answers people’s questions in the former publication. He is from a family of renowned astrologers. Though he became a mechanical engineer, he realized later that he had an inborn talent for astrology, after many of his casual predictions for friends and relatives came true. He has researched and studied in detail subjects like astrology, astronomy, gemology, numerology, and the Tantras.

Rao was introduced to Vedic astrology by his mother when he was 12. He refuses to charge fees for teaching astrology, and this has won him many admirers. Kotamraju Narayana Rao belongs to a reputed Andhra Brahmin family. He has a Masters in English Literature and taught English before joining the Indian Audit and Accounts Service from which he retired as the Director-General in 1990. He has learned some little-known secrets from his gurus, Swami Paramananda Saraswati and Yogi Bhaskarananda, which are not found in any books. Some of these secrets were revealed in his book, “Yogis, Destiny and the Wheel of Time”. He had a key role in starting the Vedic Astrology course in the Bharatiya Vidya Bhavan, New Delhi, where he is an Advisor and senior teacher of Astrology Courses. Bharatiya Vidya Bhava is regarded as the best Vedic Astrology institute in India.

Kapil is a psychic, palmist, and the only phonetic numerologist in the country. He wrote the best seller, Numerology Made Easy. He also writes astrology columns regularly for the Times of India, and his daily predictions in Radio Mirchi have a large audience. Many people consult him for advice on numerology. Based in Pune, Kapil owns a logistics company too. He has done his Masters in Journalism and Communications and has degrees in MBA and Law. He has written columns for The Times of India, Indian Express, and Mid- Day. Film stars, politicians, models, and bureaucrats are among his clients, and his accurate predictions and solutions have helped many. Kapil is an Astro-Numerology consultant on many online sites. A Himalayan master taught him some esoteric secrets, and he is also an expert in face reading, gem therapy, and graphology.

Though he started out as a finance broker, he began learning numerology as a hobby. He predicted the results of the famous movie Kaho Naa Pyaar Hai. Bansilalji has studied Numerology for over 30 years and has perfected a unique method. Once, he sent a message to a famous film star who was in jail, that if his case came for hearing on a certain day, he would be freed. This came true, and it marked the turning point in his career. Then, friend and film distributor, Farahad Nathani, gave him some film titles to see which one would be lucky. The title he zeroed in on was “Kaho Naa Pyaar Hai”, and Jumaani added two extra A’s.

Son of the famous numerologist Bansilal M Jumaani, he quit his job of 17 years as a marketing executive and chose to become a numerologist like his father. An Astro numerologist, Jumaani is often consulted by businesses like Kotak Mahindra Bank, Reliance Industries, Haldiram’s etc. Film and sports celebrities like the Bachchans, Irfan Khan, Anil Kumble, and even politicians like Smriti Irani have consulted him.

He had given approval for the name Jio, the telecom brand of Reliance, and also suggested a launch date for it.

The daughter of Bansilal Jumaani, Swetta studied numerology under her father’s guidance. She made a famous prediction about the effects caused by the planet Mars coming closer to the Earth, which came true. Even as a child, Swetta was very interested in numerology and used to advise her close friends and relatives, even at that time. She predicted that from 2004, the city of Pune would see a real estate boom as well as huge development, which would put it on the international map. Now Swetta is known as one of the finest numerologists in the world. She has written articles and columns for many newspapers and magazines. Many television and radio channels have featured her talks.

Dr Sohini Sastri is the recipient of many Best astrologer in India awards which includes one in 2019. Many universities have felicitated her as well, and she is quite popular among Bollywood celebrities and industrialists. Dr. Sohini Sastri believes that an individual’s life in this birth is shaped by their “karma” or actions in their past life. Dr. Sohini Sastri counsels her clients and encourages them to find ways to cope with their problems. Dr. Sohini Sastri has expertise in Vedic astrology, Palmistry, Numerology, and Vastu Shastra. She is the astrologer of choice for many Bollywood heroines. She is also one of the best Tantriks in India.