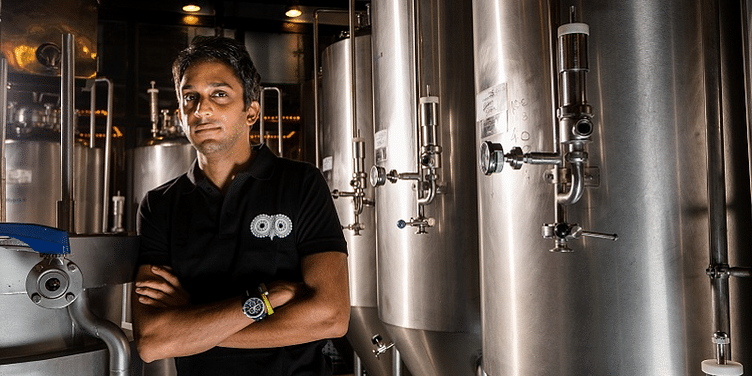 Started in 2013, Javed Murad's White Owl Brewery makes eight types of craft beer and claims sales of 20,000 cases of beer a month. Read how this Harvard graduate did it.

Spearheaded by United Breweries' Kingfisher lager, beer has become one of the most popular alcoholic beverages in India.

Craft beer made by micro breweries has also grown in demand, owing to the extra focus on experimentation, unique flavours, and quality. This craft beer segment in the country is expected to reach $900.0 million by 2024, according to a report by Goldstein Research.

White Owl Brewery, started in Mumbai in 2013 by Harvard Business School graduate Javed Murad, is one such brand looking to make its mark in the swelling craft beer market.

One of the first licensed microbreweries in Mumbai, White Owl has shed its 'micro' tag and claims sales of 20,000 cases of beer a month (which amounts to over 57 lakh pints of beer over one year, at 24 bottles per case.)

The term 'micro' is relative to each country, and we don't really call ourselves a microbrewery anymore," Javed tells SMBStory, adding, "Rather, we are a craft brewery."

How White Owl was started

Around 2007, Javed was studying in the US, and started to take a strong liking to beer. But when he visited Mumbai, he felt there wasn't any great, locally-brewed beer available. All the imported beer was mass-produced from a different country, and was much more expensive.

This was the time before India was introduced to craft beer. It was in 2009 that the first Indian brewpubs, Doolally (Pune) and Howzatt (Gurgaon), saw the light of day.

While Javed stayed in the US, the Indian craft beer market started growing and slowly started to take shape. Javed took notice, and decided to come back to India. In 2013, he started White Owl in Mumbai as a restaurant, and then turned into a brewery in 2014 once the licenses were secured.

Over the years, Javed has raised over Rs 30 crore as equity capital to fund his idea, and plans to raise more, he says.

To expand White Owl's craft beer into bottles and cans, Javed signed up with a contract manufacturing partner in Raisen district in Madhya Pradesh, outside Bhopal. "The aim was to make good craft beer and bring new flavours and experiences to beer drinkers across the country," Javed says.

He also wanted to source water locally. When he was brewing in Mumbai, he used water from the Municipal Corporation of Greater Mumbai. And when the manufacturing moved to Raisen, he continued to use water from local sources.

Water impacts the taste of the beer. So we decided to 'neuter' the water and make it tasteless," Javed adds.

This allowed him the freedom to brew anywhere, use local water, and still make the beer taste the same. "If we didn't do this, scalability would be an issue down the line," he explains.

Javed decided to import grain from Belgium and Germany for the beer as he felt local produce, although improving, was not up to his mark. The 'neutered' water and imported grain are used alongside stainless-steel, food-grade equipment in an industry-standard method of processing.

Javed believes that using the best ingredients and equipment along with natural fermentation and aging separates White Owl's premium craft beer from lower-cost and mass-produced beers.

During pasteurisation, the bottles are subjected to regular tunnel pasteurisation. They are passed through a narrow chamber where hot water is sprayed over them, and they are then cooled. The process is critical in preventing the growth of microorganisms that could spoil the beer.

For White Owl's kegs, its newer offering, a flash pasteruisation technique is used. It is a high-temperature, short-time pasteurisation process where the unpackaged beer is is rapidly heated and cooled before being put into the kegs.

White Owl also claims its beers do not have any artificial flavours, synthetic colours or added preservatives.

The Spark, Diablo and Ace retail across 2500 bars and wine stores in Mumbai, Pune, Goa, and Bengaluru. Spark and Diablo are also available in Delhi.

Spark and Diablo are also available in cans.

Although craft beer is a premium product, White Owl has priced its beer closer to the mass-produced ones in the market.

A pint of Spark is in the same range as Kingfisher Ultra and Heineken, while Ace and Diablo cost more," Javed says, adding, "The MRP of our beer (pint) is between Rs 110 and Rs 130 in Bengaluru."

Despite the relatively low prices for a premium product, Javed claims a robust product margin. He plans to start using local grains soon, whose quality has improved, but not in an attempt to lower product costs and improve product margin.

He explains that raw materials account for 30 percent of the cost of White Owl's products, packaging accounts for 40 percent, and the rest is transport and utilities.

"The cost of the grains is around 70 percent of the raw materials cost. Hence, moving to local grains is not an impactful way of cutting the MRP of the products. So we have no interest in changing the pricing," he says.

White Owl's five year journey has not been without challenges. When moving to the Madhya Pradesh manufacturer and an automated setup, Javed found it tricky to maintain consistency in product quality and taste. Following a brewer-focussed and standardised approach helped the brand get it right the first time, he says, adding, "We sold the test batch too. Nothing went to waste despite migrating the manufacturing."

Another challenge was in packaging. White Owl started with transparent labels on its bottles but quickly found the branding wasn't eye-catching in a retail setting. "We had to shift to a paper label to boost visibility of the product. We went for a classic, raw look," he says.

When it comes to state regulations and tax over alcohol, Javed remains surprisingly unconcerned. According to him, the same regulations apply to other players, and as a result, White Owl faces no unique challenges in this regard.

However, explaining to potential investors that these regulations don't adversely affect the business is quite a task. "The investor sentiment towards alco-bev companies is somewhat skeptical. I spend a lot of time in carefully explaining to investors about the market and the taxes and regulations," he says.

Going by White Owl's pricing, Javed believes the brand doesn't have any direct competition other than a few other national craft beer companies in a highly under-penetrated space.

Further, White Owl doesn't have to fight to acquire another brand's market share as it is targeting new beer drinkers who are cost-conscious but still desire quality.

However, there is still likely to be some overlap as people who drink inexpensive and mass-produced beer move towards premium craft beer. Similarly, those drinking expensive and imported brands might move towards lower cost, locally-produced options without sacrificing on quality.

White Owl reaches out to the untapped segment as well as existing beer drinkers through its digital campaigns in an attempt to foster engagement around beer, rather than push its own products. In a market where alcohol cannot be advertised, White Owl is running campaigns such as 'pint-sized victories', which Javed explains is a way of encouraging small celebrations over a pint of beer.

"Another campaign we have is our 'no more rubbish' drive, where we give eco-friendly bags with White Owl branding to stores," he says.

Besides these ways of acquiring more customers, White Owl is planning to add strong beer to its product portfolio. The brand is also targetting further regional expansion, and will soon start brewing in a manufacturing unit in Hassan, Karnataka.

Craft beer lovers, unite! Indian brand Simba Brewery is selling its Wit and Stout at a pub near...