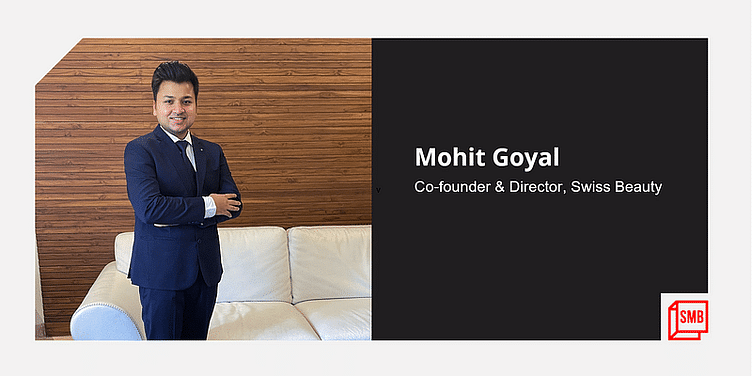 According to a report by Mordor Intelligence, the cosmetics industry in India could be relatively strong as compared to other consumer categories despite the sales being poor in 2020 amid the pandemic.

Decade-old cosmetics company ﻿Swiss Beauty﻿ is a testament to such an emerging trend. Founded by brother duo Mohit and Amit Goyal in 2010, the Delhi-based company sells cosmetics and skin care products including lipsticks, compact, mascara, highlighters, eyeshadows, blush, and face serums. The company claims to have over 200 products and 1,000 SKUs (stock-keeping units).

In the last 12 years, Swiss Beauty has carved a niche in a market dominated by the likes of Maybelline, Lakme, Himalaya, The Shahnaz Hussain Group, and more with its affordable products. Online presence apart, Swiss Beauty is present in 7,000 outlets across 200 cities in India, and this number is set to cross 10,000 this year, Mohit tells SMBStory.

He also highlights that this year, for the first time, the brand is eyeing international expansion in the Southeast Asian markets and the Middle East.

In an interaction, he delves deep into the journey of building Swiss Beauty.

From selling sindoor to a cosmetic brand for the masses, Insight Cosmetics now clocks Rs 73 Cr in annual turnover

It all began in 2008 when Amit was a trader of cosmetics products. Mohit says that since his brother was handling several brands in the market, he could identify a major gap in it.

“We saw that there were two types of cosmetic products in the market: the first, which were good in quality but very expensive, and the other, which were affordable but of poor quality,” he says.

Realising the need for quality and affordable products Amit, along with Mohit who followed him soon after finishing his graduation, launched their own brand two years later.

Initially, Swiss Beauty was merely a trading company but from 2010 onwards, it became a full-fledged beauty brand.

When they started their brand, Amit and Mohit leveraged their contacts with third-party manufacturers which they had accumulated in the two years they spent in the trading business. With their help, they rolled out a basic range of products that included lipstick, mascara, compact powders, and foundation.

In the first year, it was just the two of them handling the company. In the second year, they started hiring and grew the team to five members. Additionally, Mohit and Amit started travelling to different countries and attended exhibitions across the world to understand the beauty industry. This helped in ensuring they sold good quality cosmetics to their customers.

Mohit says that the domestic industry has expanded in the last two years but foreign markets have always had an edge when it comes to manufacturing as compared to India. According to RedSeer, India’s beauty and personal care industry is expected to grow at 12 percent per annum to reach $28 billion by 2025, from an estimated $16 billion in 2020.

Further explaining how they worked on the cost, Mohit says that bigger brands like Maybelline spend a lot of money on marketing, and the cost gets trickled down to their products.

He explains that since the beginning, Swiss Beauty has relied on word-of-mouth marketing. He claims the company never had a robust marketing budget and “put money in developing or enhancing the product,” which is why they have been to give the cost-benefit to their customers.

“If a girl uses our products and likes them, then she will tell others about it,” says Mohit.

According to a beauty price index report by a Mexican-based ecommerce company, Linio, India is the second-most affordable market for beauty and treatment products after Vietnam. In India, the average cost of lipstick is Rs 926 and Swiss Beauty’s price range is well below the average. In addition, where the starting price of eyeshadow for bigger brands like HUDA Beauty, Lakme, or Maybelline is Rs 600, for Swiss Beauty, the cost starts at Rs 200 and the maximum selling price is Rs 1,500.

Mohit claims Swiss Beauty’s products are priced 30-40 percent lower than others. Another company in the Indian beauty market focusing on affordability is Insight Cosmetics.

As the company grew and scaled up, it expanded its basket of products. Started with basic products, it introduced primers, highlighters, contouring items, non-transferable lipsticks, and more. Mohit says that attending exhibitions abroad helped in getting several trends to the Indian market.

He also explains that customers have also matured. “Earlier, items like primers and highlighters were only used by makeup artists and professionals.”

Till 2019, Swiss Beauty was an offline-heavy brand, but the company started taking steps to build an online presence. It got listed on ecommerce websites like Nykaa and Amazon, and in the wake of the COVID-19 pandemic, launched its D2C website.

“We were impacted in the first three months when the pandemic struck but when the restrictions for the non-essential items were lifted, we started getting back on track,” Mohit says.

Going forward, Swiss Beauty has several plans to hit some revenue targets in the coming times. While Mohit refuses to share the revenue numbers but adds they are planning to expand to Tier-II cities like Jaipur, Ganganagar, and more since low pricing is one of their USPs.

(This story was updated to change the image)

From a small kiosk to 71 outlets in 25 cities, this QSR brand wants to compete with McDonald’s, Burger King