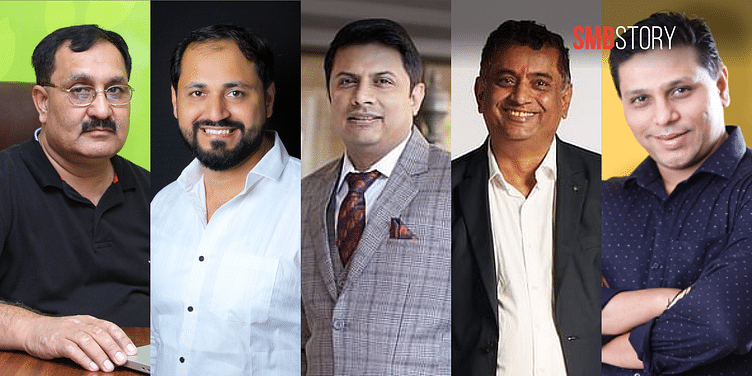 Former Wipro chairman Azim Premji once said, “You cannot get into the business just for the fashion of it.” The quote is true now more than ever as the current hustle culture has given rise to a new breed of entrepreneurs who look for quick returns. However, businesses take years of hard work and grit.

SMBStory lists inspiring stories of Indian entrepreneurs who not only dared to chase their dreams despite hurdles but stayed persistent enough to find success.

Between 2001 and 2003, Anuj Mundhra was working in a saree showroom in Jaipur, earning Rs 1,400 every month. He soon realised that he couldn’t sustain himself with the income for too long. In 2003, he quit his job and started a business of trading suit pieces.

He would purchase suit sets from vendors and further sell them to other vendors and shopkeepers. When he started earning some income, Anuj opened his own block and screen printing units in Jaipur.

This went on until 2012 when Anuj came to Delhi and saw huge hoardings of ecommerce marketplaces of Jabong and Snapdeal﻿. He had a moment of epiphany and realised that ecommerce is going to be the future of shopping in India.

He came back to Jaipur and spoke to a Chartered Accountant (CA), enquiring about company regulations and compliances. He launched ﻿Nandani Creation﻿ in 2012 and branded the ecommerce offshoot as Jaipurkurti.com. In the first year itself, the company clocked a turnover of Rs 59 lakh.

Anuj started the business with very limited resources. He pooled in Rs 50,000 from close friends and later, even took out a loan from a bank to seed his business. With the funds, he bought 10 sewing machines for stitching kurtis and suits.

His wife, Vandana Mundra, would design kurtis, which were then dyed, printed, stitched, sampled etc in a manufacturing unit in Kartarpur Industrial Area, Jaipur. He got listed on ﻿Snapdeal﻿ and Jabong and started selling in-house manufactured items on these platforms.

Anuj says that in the initial years, although there was less competition, the struggle to run an ecommerce company was immense.

Today, the company manufactures and sells suits, kurtis, fusion wear, and a host of other apparel items. The B2C company even exports to countries such as the UK, the US, Australia, Malaysia, and a few others. The average selling price for suits is Rs 900 and for kurtis, it is Rs 650.

In 1981, 12-year-old Bhimji Patel left Meghpar village in Kutch, Gujarat, and went to Mumbai - the city of dreams. A voracious reader and highly skilled at mathematics, Bhimji was determined to put his talents to use in the bustling city. He and his cousin took up odd jobs to earn a living in Mumbai.

After scraping by for a few years, he took a loan of around Rs 30,000 from his elder brother and started a general store. Taking small, confident steps forward and growing the business slowly, Bhimji gradually expanded his store into a supermarket.

“My father took up all opportunities that came his way. He found a chance to become a commission agent for various products that came from overseas - especially liquor. His constant knack for networking helped him supply imported liquor to foreign embassies in India.”

Bhimji’s days as a commission agent for imported liquor provided valuable experience and set the stage for ﻿Monika Enterprise﻿ — a wholesaling and distribution business he launched in Mumbai in 2008.

Like most young people residing in rural areas around Delhi, Prem Khanna harboured dreams of moving to the capital city and building a life for himself.

When he left Kharkoda village, his parents gave him Rs 5,000 to help him pursue his dreams. He started working at a local factory in Delhi.

He worked out of a small room in the Shahdara district, and made chokes at night with his own hands and sold them at local markets during the day.

With his savings, Prem established ‘Gourav Luminaries’ in 1991 and began building his brand.

His sons Gaurav and Pankaj joined the business in 2010, and ﻿Gourav luminaries﻿ — started from a single room — grew to become an electricals brand with four manufacturing units for its Otto modular switches (its bestselling product), Yodha switchgear, Hilyt LED lights, Viktor ceiling fans, etc., in the Sahibabad Industrial Area.

The company has built a 250+ distributor and direct dealer network across North India and earns Rs 52 crore revenue.

At 18, when Vikesh Shah started working at a small cake shop in Mumbai just to earn some extra money, never did he imagine that his experience would lead to something big.

He worked hard at the store, earning Rs 700 a month, and rising to the ranks of a manager in just two years. Soon after, he quit, and started his own corporate catering venture and another food-related business.

In 2007, he started his first physical store, a bakery called The Happiness Deli in Mumbai, so that his desserts could reach a wider audience.

A keen observer of trends and cultures, Vikesh had noticed during his travels to Europe that pancakes, with its various toppings and flavours, were a staple, and consumed mainly as a breakfast meal. With the increasing popularity of pastries and English desserts in India, he felt that there was a huge untapped market for pancakes.

“I was confident that introducing pancakes as a dessert in India will work because 20 years in the industry had given me enough knowledge about the taste buds of the Indian subcontinent, and more insights into the market,” he says.

This is how the idea to start a pancake quick service restaurant (QSR) chain in India took shape.

Vikesh launched the first outlet of his pancake speciality store in Mumbai’s Kala Ghoda in 2017. It started selling pancakes for Rs 99, thus the name - ﻿﻿99 Pancakes﻿﻿.

Between 2018 and 2019, it launched 65 stores pan India including Gujarat, Telangana, Madhya Pradesh, Karnataka and Tamil Nadu. Today, it is also present on delivery aggregators such as ﻿Zomato﻿ and ﻿Swiggy﻿. 99 Pancakes raked more than Rs 16 crore in FY20.

At the young age of 13, Ankush Kakkar (now 38) took up the responsibility of helping his father run his woollen shawl business in Ludhiana as the family’s income wasn’t stable enough to hire a helping hand.

Recalling the old days, Ankush says that the family had to struggle a lot, and he had to manage both his studies and help with the business. Right after school, he would go to his father’s shop and help with supplying products to the customers and continued helping like that for two years.

But he realised something needed to be done to make the business financially stable. So, after three years in 2000, the father-son duo decided to set up a dhaba near Ludhiana bus stand. Ankush was in Class XII and had acquired the skills to run the business.

“We got a patch of land to run a small dhaba where we’d feed bus and truck drivers. This gave us enough of a kick that within two to three years, we bought another property to build a small hotel of 20 rooms,” he recollects. One thing happened after the other and in 2006, Ankush and his father bought another hotel in Ludhiana.

From running a dhaba at a bus stand to building a premium resort, Ankush has come a long way. Ankush claims that as of March 2021, ﻿Treeoise Resort﻿ had sales of Rs 1.2 crore with a net profit of Rs 13.44 lakh.