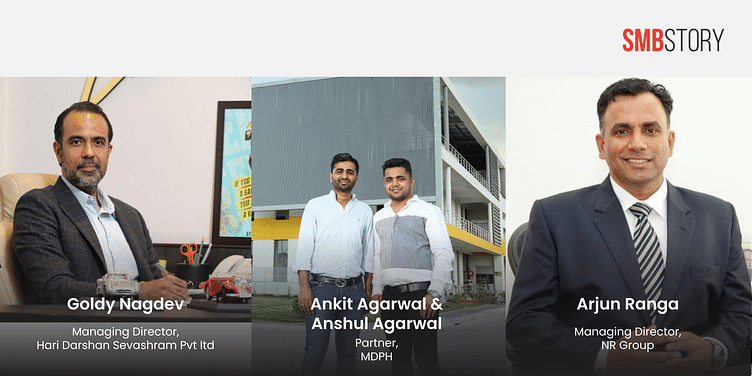 From Hari Darshan to Cycle Pure, these four Indian agarbatti producers have established multi-crore businesses by taking small steps and making a niche for themselves in the market.

India is a reservoir of spirituality, with an unending demand for agarbattis and dhoop, which are an integral part of the country's prayer rituals. This also makes India one of the leading producers of agarbatti (incense stick) in the world.

Indian incense sticks are exported to more than 150 countries, with the US, the UK, Malaysia, and Nigeria being the top markets.

With most of the raw materials sourced locally, the low-cost product has given immense opportunities to entrepreneurs who started very small but have now built large multi-crore businesses.

N Ranga Rao was only eight years old when he lost his father. Coming from a family of teachers and purohits (priests), Ranga Rao was burdened with responsibilities at a very young age. He started doing small jobs, switching from one to the other, to make his ends meet. Years passed by, and he moved to Coonoor during his teenage years to work as a store supervisor.

“My grandfather (Ranga Rao) always had an entrepreneurial spirit. When he moved to Coonoor and worked for a while, he hit upon the idea to move to Mysuru and start an agarbatti (incense sticks) business, keeping intact the family’s traditional values and doing something to serve the religion, says Arjun Ranga, a third-generation entrepreneur and Managing Director, NR Group.

Ranga Rao started making agarbattis at home with the help of his grandmother and named the company Mysuru Products and General Trading Company, and later changed it to NR Group. He used to visit the market every day to get the raw materials, make the incense sticks the next day, sell them, and get money for the following day’s production. He used to feed his family with the remaining money.

“My grandfather made great sacrifices and he took bold steps in his business journey. He soon realised that to have a successful business in India, one needs to create a brand. Hence, he launched ‘Cycle Agarbathies’ to take the business to a new level.”

In 1948, fighting against all odds, Ranga Rao set up a factory in Mysuru and since then, there has been no looking back. Today, NR Group clocks a turnover of Rs 1,700 crore, has a strong presence in 75 countries, and sold 12 billion agarbattis last year worth Rs 1,000 crore.

Even seven years after Prakash Agrawal quit his sales assistant job at a textiles store in Indore, he couldn't find success as an entrepreneur. His attempts at manufacturing and selling soaps, detergents, and hair oils all proved to be unsuccessful.

Prakash’s mother didn’t want him to continue manufacturing and failing. The family had limited means, and she always wanted her son to pursue a stable job in the textile shop. But he was adamant and wanted to stick to entrepreneurship.

One fine day in 1992, Prakash’s mother told him that as he couldn’t succeed as a manufacturer, he should become a distributor for any established agarbatti (incense sticks) brand.

He took this as a challenge instead – wanting to prove his mother wrong by becoming a successful manufacturer. But even Prakash had to admit that agarbattis were a good idea. The Indian market for agarbattis was flourishing in the 90s on the back of a swelling demand.

“My father did not have any capital. In 1992, he borrowed Rs 5 lakh from some relatives to start an agarbatti manufacturing business, Mysore Deep Perfumery House (﻿MDPH﻿), and agarbatti brand Purab Paschim Uttar Dakshin. His younger brothers, Shyam and Raj Kumar, joined him in the effort.”

And so, Prakash and his brothers began making agarbattis out of a small garage in their Indore house. His mother joined to supervise the labour and production processes.

The brand started doing well but Prakash wanted to experiment with a new brand with an English name and colourful packaging. This led him to launch ‘Zed Black’ under parent MDPH in 2000.

The experiment proved hugely successful it soon became one of the fastest-growing agarbatti brands in India.

Today, the company processes over three crore incense sticks and sells more than 15 lakh retail packs of Zed Black agarbattis in India every day. In FY21, it clocked a turnover of Rs 650 crore.

From the lilies in the north to champa in the south, and jasmine found almost everywhere, Indian fragrances hold a rich history.

Betting on the plethora of Indian fragrances and placing them in the prayers of millions of Indian households is ﻿﻿Hari Darshan﻿﻿, one of the oldest players when it comes to incense, dhoop, and aromatherapy products.

In the 1800s, the family used to trade herbs and fragrant essential oils, but the business was abruptly halted during the Partition in 1947.

Nonetheless, the traditional business of fragrant essential oils survived, and the present-day brand, Hari Darshan, was born in 1970 in Delhi’s Sadar Bazaar.

In an interaction with SMBStory, Goldy Nagdev, a fourth-generation entrepreneur, and Managing Director of Hari Darshan Sevashram Pvt Ltd, narrates how the brand has built its legacy in over 100 years.

He says, “With our dhoop and agarbattis, we're selling a few moments of bliss, and that’s what keeps us going. People remember us when they are praying.”

Over the years, Hari Darshan has established itself as a strong player in the incense market, competing with the likes of Cycle Pure Agarbathies, Zed Black, and Mangaldeep.

At present, the brand claims to contribute an annual production value of Rs 300 crore worth of incense products in the Indian market.

“People use our product with a lot of faith, and we cannot compromise on our quality. This is what has kept us going. It is difficult to give a number on how much we manufacture, but we are dispatching about 70-75 product ranges in 35-40 trucks a day,” Goldy tells SMBStory.

Kantilal Parmar says his brother initially worked in rotogravure printing where he used to print packages for various agarbatti manufacturers. Later, in 2003, both the brothers branched out by trading in the raw materials used for agarbatti manufacturing.

"We used to trade raw materials like perfume, packaging material, and more used for manufacturing agarbatti. We continued the same work for around seven years after which we decided to open our own manufacturing unit and scale up rather than just continue trading,” he tells SMBStory.

In 2009, deploying capital from personal savings and taking a loan against property, Kantilal started an agarbatti manufacturing unit in a 1,200 sqft space with around Rs 15 lakh.

He says that an agarbatti manufacturing unit can be small enough to start at home with a meagre capital. However, that restricts scaling up and customisations, which needs more capital.

Kantilal says, “Though we had connections in the market, we had a tough time getting orders initially. We struggled for the entire first year after which we started receiving a good response.”

Gradually, the company started growing and by 2012, it had grown to a 320-distributor network. Seeing the tremendous market response, Kantilal then decided to take a bold step and set up another manufacturing unit in an 8,000 sqft space.

Kantilal registered ﻿Chamundi Agarbathi﻿ under the MSME scheme in 2012 and within three years of inception, the brand became one of the top manufacturers of agarbatti. In FY 20, the company clocked an annual turnover of Rs 20 crore.

At present, the company has a presence in almost all the major markets of India, including Uttar Pradesh, Bihar, West Bengal, Karnataka, Andhra Pradesh, and Kerala, through distributors and small retailers.