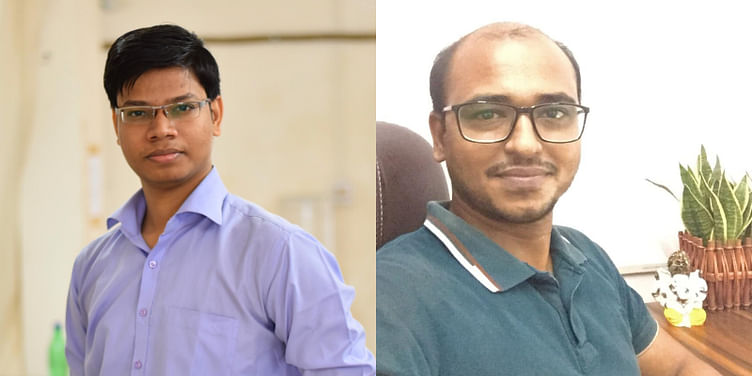 Launched in 2018, Skilancer Solar Pvt. Ltd. claims to have saved 13,000 litres of water with every cleaning of a one-megawatt solar power plant.

Mahatma Gandhi once famously said, "The earth, the air, the land, and the water are not an inheritance from our forefathers, but on loan from our children. So, we have to handover to them at least as it was handed over to us.”

The elixir of life – water – is vital to every living being, and earth comprises two-thirds of it. However, over the years, with the advent of industrialisation and increased use of advanced agricultural methods, water is being wasted at an alarming rate.

According to a report by the United Nations, globally, over 80 percent of all wastewater from households, cities, industries, and agricultural lands flows back to nature without being treated or recycled, consequently polluting the environment, losing valuable nutrients, and other recoverable materials.

Two engineers – Manish Das and Neeraj Kumar – saw a major gap in the solar industry where a lot of water was getting wasted while cleaning the solar panels.

Neeraj says, “To clean a single solar panel roughly two litres of water is required. And to clean a one-megawatt plant, we need roughly 13,000 litres of water.” In fact, the solar panels are cleaned with clean drinking water as normal groundwater can ruin the state of these panels by degrading their efficiency.

To counter this, Neeraj developed a robot for cleaning solar panels as a project in his final year at IIT-Jodhpur. He realised that his project holds a massive business opportunity. Soon after, he met his co-founder Manish who has four years of experience working for cleantech companies.

In 2017, Manish and Neeraj started their operations, and in 2018, the duo launched Skilancer Solar Pvt. Ltd. – a company that manufactures robots to clean solar panels. IIM-Lucknow played a huge role in incubating the company in the beginning.

The role of incubation centres in India is quite underestimated. Talking about the financial cushioning the incubation centre provided, Manish says, “It saves a lot of finances and resources. A manufacturing company requires huge investments, but working with IIM-Lucknow gave us access to their laboratories, faculties, and other facilities. Moreover, technically, the final year students developed a lot of products and tools for us.”

﻿Skilancer Solar﻿ Pvt. Ltd.’s artificial intelligence-backed robots are safe and reliable, have energy independent operations, and are water-free since the brushes attached below to their surface, are used for cleaning.

Besides, these robots are autonomous and operate through an internet connection. While manpower can clean solar panels with double the resources and efforts once a week or fortnight, the robots developed by the company can independently clean the panel on a daily basis.

Explaining the process of how the robots work, Manish says, “We have a small solar panel which is placed on the outer surface of the robot. Inside the robot, there are two junction boxes that contain the motors, an electronic kit, the battery, and much more. The battery is connected with the solar panel, and the power is stored in the battery. The motors help in the to and fro movement of the robot, and the roller helps in wiping off the dust.”

Further, Neeraj adds that the entire robot is made from aluminium which keeps corrosion at bay. It is also wireless to avoid any accidents at the solar power plant.

Most of the parts are developed in-house in its manufacturing unit in Faridabad, whereas some other parts like the motors are sourced from Gujarat, Pune, and other places in India.

Another unique feature about the Noida-headquartered company is that it uses retrofittable technology in making its robots. Explaining this further, Neeraj points out that most companies like Ecoppia which are into this particular segment, install extra railings on the panel to make installation of cleaning robots easier, but in turn, it increases the weight, as well as the cost of maintenance.

Using the same technology, Skilancer has installed wheels which makes movement and installation of robots an easier process. The robots weigh about 25 kgs and can operate for 15 years. To date, the company has manufactured more than 350 robots, of which 280 are installed at sites across India, including Gujarat, Maharashtra, Madhya Pradesh, Karnataka, Kerala, and Rajasthan. The company has, however, refused to reveal its turnover.

Manish points out that robots are low-maintenance products since they are made up of aluminium. The company provides two kinds of maintenance – one under the annual maintenance contract (AMC), and the second happens when the robot breaks down.

The co-founders talk about the desperate situation in current times, owing to the coronavirus pandemic.

Since the lockdown, Skilancer’s factories have been shut, and the labourers have packed their bags and gone to their native residences. Manish says that they are trying to take stock of the situation by assuring their employees.

He says, “We are trying to give them adequate confidence about their jobs, and are also assuring them of the benefits such as health and medical insurances.”

Neeraj says that the company has slashed compensation and salaries a bit, but it has not laid-off any employee.

Before the lockdown gets lifted entirely, the duo is trying to come up with new technologies that will help the company foray into the B2C sector, and expand its reach. Neeraj says, “We need different products which can work accordingly with less manpower.”

The company is also looking to expand its operations in the Middle East, owing to its presence in Doha, Qatar already.